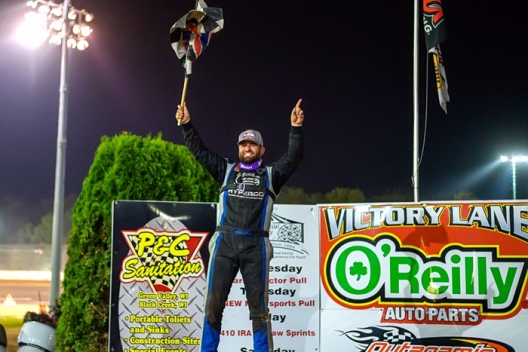 SEYMOUR, Wis. — Cade Dillard's been needing a win on the World of Outlaws Morton Buildings Late Model Series, and with his voice cracking, he thanked his family, crew and sponsors for helping him to victory lane Tuesday at Outagamie Speedway.

"It just feels good," Dillard concluded in his emotional victory lane interview as he captured his second WoO victory of the season and fourth of his career. His previous victory came April 30 at Boone (Iowa) Speedway.

The fourth-starting Dillard made a nifty outside-inside move on polesitter Brandon Overton in turn three on the 15th lap, then led the rest of the 40-lapper on the high side of the third-mile oval in a race co-sanctioned by the DiscountShopTowels.com Dirt Kings Tour.

Dillard took the checkers 1.082 seconds ahead of series points leader Brandon Sheppard of New Berlin, Ill., last year's winner at Outagamie in the tour's initial visit. Chris Madden of Gray Court, S.C., was third followed by Ryan Gustin of Marshalltown, Iowa, who led laps 3-11 but lost a three-second lead when he ended up against the turn-three wall after trouble in traffic. He rallied from the tail to finish one spot better than Overton, his fellow front-row starter.

Evans, Ga.'s Overton led the first two laps before Gustin began his high-flying run that gave him a comfortable lead in the early going. But his bid for his first career WoO took a blow when his car ended up driver's side door against the turn-three wall, handing the lead back to Overton for the restart.

Dillard made the most of the restart to grab the second spot and duplicated Gustin's high groove in tracking down Overton. But instead of going around the lead, Dillard dove low in turn three to grab the lead and then slid back into his favored groove, where he mostly stayed the rest of the way. Sheppard moved into second on lap 17, but he never got in position to seriously challenge the winner, whose previous 2021 victory came at Boone (Iowa) Speedway.

"It's been a rough year and these are hard to come by," Dillard said in victory lane with halting voice. "We're definitely racing against the best in the country and just to be able to race with these two Brandons here is an honor in itself, but to be able to outrun 'em is pretty humbling. Like I said it's been a pretty rough year, so this feels good."

Dillard wasn't sure where the competition was, so he just kept trucking toward the finish.

"As of tonight, they wouldn't let us signal. That might've been a good thing," Dillard said. "I don't even know how far they were behind me, but I guess it kind of takes you back to the mod days.  You just kind of run it (hard) the whole time. You don't have nobody telling you that you have a lead or where to race at. We just had a really good car, and we've been working hard at it. Hopefully things have turned around."

Sheppard fell one spot shy of his 2020 Outagamie finish, but he was pleased with the performance of his Rocket Chassis house car.

"Man, I just didn't know where to be at on the restarts honestly. I wish I would've chose the top on the first restart there," he said. "We had a really good car tonight. I'm so happy with my race car. The guys did a really good job. I felt really comfortable with it in the slick, and we've been trying to get back to there for a while now, and I think we're really close. I felt really good. My car was good top, middle, bottom, wherever I put it. Congratulations to Cade, he did a great job there."

Madden, who improved three positions in reaching third, fell short of his goal of gaining ground in the points chase.

"We had a good car and another podium finish for us. We're steady right now. I'm missing just a little bit, and if I can just find that little bit, I think I can get us back in victory lane," he said. "All in all for Team Drydene, I think we did an outstanding job. Great racetrack tonight. I just wish I would've had a few more laps around here and I think I could've figured out what I needed to do."

Gustin's first series victory appeared to be within reach as he pulled away from the field early, but after his spin, coming from the rear was a hill too high to climb.

“I don’t know what that (lapped cars) was doing,” Gustin said. “It looked like he was going to the bottom, and he pulled it to the right at the last minute, and I was already on the gas and couldn’t get off it. I tried and just ran it straight into the fence.

“I was just mad,” Gustin said of his rally. “I was trying to get as many points as we can after we get wrecked leading. I thought it was our night, but it just wasn’t meant to be.”

Series drivers continue Wisconsin action for a three-race weekend at New Richmond's Cedar Lake Speedway with a $6,000-to-win event on Thursday followed by the Friday-Saturday USA Nationals, at $50,000-to-win one of the richest paydays of the season on the national tour.

Notes: Dillard's WoO victories have come in New Mexico, Pennsylvania, Iowa and Wisconsin. ... He was previously a 2019 winner on the DiscountShopTowels.com Dirt Kings Tour at Eagle Valley Speedway in Jim Falls, Wis. ... Sixteen of 24 starters finished on the lead lap. ... Besides the lap-11 caution for Gustin, one other caution for debris on lap 25 slowed the action.