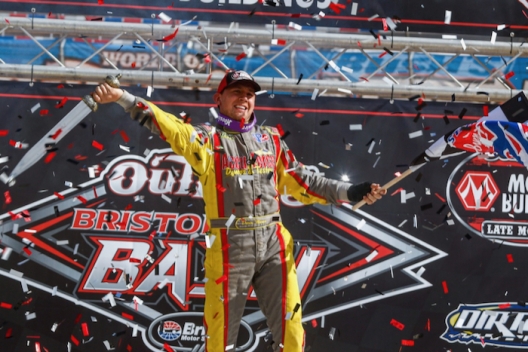 BRISTOL, Tenn. — While sitting through Saturday’s rain storms that delayed and eventually postponed Bristol Motor Speedway’s Bristol Bash finale to Sunday afternoon, Devin Moran happened to watch an old NASCAR race to pass the time. Little did Moran know that his bored race viewing would end up being a film study session that would come in handy in Sunday’s World of Outlaws Morton Buildings Late Model Series feature at Bristol’s famous half-mile oval.

Putting that study to good use on a slick daytime surface, Moran, 26, of Dresden, Ohio, used the same steady and methodical approach that he picked up on from watching Dale Earnhardt Jr. win the 2004 NASCAR Cup Series night race on Bristol’s famous concrete high banks and surged forward in the second half of Sunday’s main event. He overtook polesitter Ricky Weiss of Headingley, Manitoba, with nine laps remaining in the 40-lapper and pulled away through the closing laps to earn a $25,000 victory at the dirt-covered NASCAR track.

“While we were sitting here watching it rain yesterday, we watched the 2004 NASCAR race here that Junior won,” Moran said of the 2004 event after which Earnhardt uttered the phrase “It’s Bristol, Baby!” that has now become a part of Bristol lore. “This (Sunday’s WoO feature) is kinda how that was, just a lot slower pace than they were. You just had to be patient, be patient, be patient and when someone messed up, get by them. And that’s what we did.

“Man, this is a dream come true. God bless because look at this place. We’re at Bristol and we just won. This is awesome.”

It was indeed patience that helped Moran to the sixth World of Outlaws victory of his career. Even after dropping back to fourth early in the race, Moran kept his cool and saved his equipment. By the halfway mark, he was back in the second spot and slowly catching Weiss for the lead. When Weiss struggled to get by the slower machine of Parker Martin on lap 31, Moran capitalized, sweeping around both Weiss and Martin to take the point.

The race’s final caution one lap later gave Weiss and a late-charging Ross Bailes of Clover, S.C., a chance to challenge Moran, but neither had anything for him. Moran pulled away through the final laps, taking the checkers a comfortable 1.470 seconds ahead of second-place Weiss. Bailes settled for third with 20th-starting Ricky Thornton Jr. of Chandler, Ariz., and fifth-starting Brandon Overton of Evans, Ga., rounding out the top five.

“I feel back there a little bit and I thought we were in trouble,” said Moran, who became just the second repeat winner on this year’s WoO tour with his second series victory of the season. “I didn’t realize the outside was so much better. I could see them lapped cars running the top so I knew if we got into lapped traffic and I could get close enough to him I could roll him real quick. That’s exactly what happened.”

In addition to the rainy day film study that helped him in Sunday’s race, there was another key ingredient to Moran’s victory that he made sure to mention in Bristol’s hallowed victory lane. With his father Donnie in attendance for one of his races for the first time this season, the younger Moran leaned heavily on the expertise of the Hall of Famer and winner of Eldora Speedway’s Eldora Million.

“I want to give major thanks to my dad,” said Moran, who finished 10th in Friday’s opening night feature at Bristol. “He ain’t been to a race all year and he came down here this weekend. He’s just been helping me, coaching me on my driving and giving me little pointers on what we need to do on the race car. This Tye Twarog Racing Longhorn Chassis was bad to the bone all weekend. We were just off the other night. I felt like we were good in the race; it was just hard to pass. We showed our speed today.”

Weiss was disappointed to fade late in the race, but more than happy with his effort. His runner-up finish marked just his second top-five result of the season and his first finish on the podium. It also ended a frustrating streak of five finishes of 16th or worse in Weiss’s five races since Speedweeks.

“We needed this,” Weiss said of his turnaround performance in his self-designed Sniper Chassis. “We’ve been struggling the last little while and just to be up front here is a huge confidence booster. Devin and his brother (crew chief Wylie Moran) and their team, they’ve had a helluva year. Just to be able to lead one lap, never mind 30-something at Bristol, it’s just awesome to say we’re up here.”

Weiss felt it was lapped traffic that ultimately cost him the race.

“I was just trying to roll and set a decent pace and maintain my tires,” Weiss said. “But the lapped cars, they were in the rubber. I seen Parker (Martin) slip up a little bit and I tried to get under him because I could see (crew member) Shawn (Gauge) closing the sticks up (indicating Moran was closing). I was able to get beside (Martin) but just wasn’t able to get around him.”

Like Moran, the fourth-starting Bailes had to regroup after dropping back early. An opening-lap miscue briefly dropped the 31-year-old Palmetto State racer out of the top five, but he recovered and used a late charge to rally into the top three.

“On the first lap I wasn’t expecting it to be that slick in turn one, so I washed up and fell a few spots back,” said Bailes, who started the year as a full-time WoO driver with Big Frog Motorsports before recently parting ways with the team to field a Billy Hicks-owned Longhorn Chassis in a more scaled-back effort. “Congrats to Devin. He did a great job in traffic. When we had our chance we had to take it and we were lucky to get to third.”

The race was slowed by three cautions. The first appeared when WoO title contender Kyle Strickler of Mooresville, N.C., slowed back in the pack. After a visit to his pit crew, he tagged the tail of the field and recovered to finish 14th, one spot behind WoO points leader Brandon Sheppard of New Berlin, Ill.

Martin slowed to bring out a lap-11 caution. The teenaged racer from Milledgeville, Ga., impressed in prelims by winning his heat race, but he faded quickly from his seventh starting spot before slowing and pitting. He ended up 22nd, the last car on the lead lap.

The final caution with eight laps remaining was caused by debris.

Notes: All 22 cars that were running at the finish were on the lead lap. … Five of the race’s 27 starters retired early. … WoO regular Cade Dillard of Robeline, La., was the first car to leave the race. He completed just one lap, electing to start and park after totaling a race car in Friday’s opener. … Jared Landers of Batesville, Ark., also pulled in after just one lap. … Friday night winner Josh Richards of Shinnston, W.Va., was never a factor in Sunday’s finale. He quickly faded from his 12th starting spot and gave up the 17th position when he pulled in on lap 10. … Sixth-starting Chris Madden of Gray Court, S.C., who was the runner-up in Friday’s opener, climbed as high as second in Sunday’s feature before fading to sixth in the closing laps. … Moran became the fourth different winner in four Super Late Model races at Bristol this season, joining Richards, Chris Ferguson of Mount Holly. N.C., and Jonathan Davenport of Blairsville, Ga. … Sunday’s race marked the final Dirt Late Model action at Bristol this season, which was covered in dirt for the first time since 2001. Sprint car and big-block modified racing April 22-24 will wrap up the track’s dirt racing this season. Track management has announced plans to cover the surface with dirt again for NASCAR racing next spring, but details regarding dirt car racing have yet to be announced.

Following Saturday night’s rainout of the $25,000-to-win Bristol Bash finale, Sunday has brought mostly sunny skies above Bristol Motor Speedway. Temperatures are in the mid-60s with a stiff breeze. … Hot laps began at 1 p.m. and opening ceremonies were scheduled for 2 p.m. The day’s schedule of events has the 50-lap WoO feature running first with the 20-lap UMP modified headliner capping the program. … Kyle Strickler of Mooresville, N.C., who lost the WoO points lead with his rough Friday night that included a DQ from his heat win for weighing in four pounds light and a wild feature flip after he ran over Jimmy Owens’s errant tire, is in Sunday’s Late Model field. His frustrated PCC Motorsports owner, Craig Sims, had indicated Friday night that the team’s weekend might be over, but after further evaluation Sims gave the go-ahead for Strickler to continue racing with his backup Longhorn car. … WoO regular Cade Dillard of Robeline, La., is still planning to make an attempt to qualify in order to earn a provisional starting spot and start-and-park in the feature after badly damaging his primary car for the weekend in a Friday A-main accident. ... Scott Bloomquist of Mooresbrug, Tenn., experienced engine trouble during Sunday's hot laps, forcing him to immediately start work on an engine swap that will likely lead him to use an emergency provisional to start the feature.