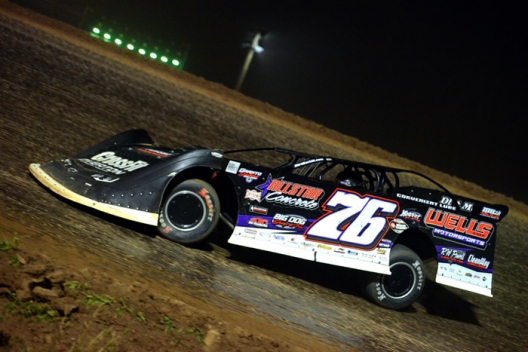 SARVER, Pa. — Top-ranked driver Brandon Overton has been as hot as a firecracker in June, so it's no surprise he closed the month with a $30,000 Firecracker 100 victory.

Surviving a couple of scares amid contact with competitors, the 30-year-old Evans, Ga., driver on Saturday dominated the second half of Lernerville Speedway's 100-lapper for his seventh victory in his last eight starts overall.

Overton captured Lernerville's high-profile World of Outlaws Morton Buildings Late Model Series event for the second time and collected $36,000 in all during the weekend, including Friday's 30-lap preliminary victory.

"We were just lucky to hold on," the 2017 Firecracker winner said, aware that he escaped a couple of tense moments in joining Scott Bloomquist and Jimmy Mars as multiple winners of the Firecracker finale. "Our car was really, really good once we got rolling and got some heat in the tires. This is awesome. I don't even know what to say."

Outside front-row starter Chris Madden of Gray Court, S.C., led the first 40 laps and regained second from Dennis Erb Jr. late in the race to finish a distant second, 3.657 seconds behind the winner. Carpentersville, Ill.'s Erb, who held the second spot nearly half the race, ended up third with 21st-starting Darrell Lanigan of Union, Ky., rallying to finish fourth. WoO points leader Brandon Sheppard of New Berlin, Ill., rounded out the top five in front of one of the biggest crowds in the 15-year history of the event.

Pole-starting Cade Dillard of Robeline, La., last year's winner when the race was reduced to 50 laps, ran second early but fell from contention when he slipped over the backstretch banking on the 18th lap and ended up 12th.

Watching Overton wheel around the track looked relatively effortless, but it's a "technical" track that requires supreme concentration. "You gotta pay attention to what you're doing," he said.

The winner feared he wouldn't even be around at the race's conclusion after contact with competitors on the first lap and again under the yellow flag on lap 51.

"Honestly, I didn't expect to win that thing. I got hit the first lap and it knocked the steering wheel out of my hand, and it felt kind of funny, and I said, 'Damn.' Then I got the lead and (Brent) Larson ran me over under caution. I thought it flattened the left-front tire."

Overton was so concerned that the contact with Larson — the Lake Elmo, Minn., driver was trying to catch up to the rear of the field under caution and clipped the left-front corner of Overton's car going past — that he nearly pulled to the infield to the assistance of his crew. When he was assured the tire wasn't flat, Overton stayed on the track, and the incident didn't slow his No. 76 Wells Motorsports a bit as he pulled away again from the Erb-Madden battle for second.

"You just gotta keep your calm and have your car right and race smart," Overton said. "I've lost a lot of 'em ... like I tell them guys, we just go out there and do our jobs, and if we win, we win, if we don't, we'll work harder and we'll come back."

"Me and Dennis raced hard out there for a long time and Brandon was just out there doing his thing — riding around, I guess," said Madden, the 2018 Firecracker 100 winner. "He had caught some lapped cars (with about 15 laps to go). It wasn't that we were good enough to get to him. He got by the lapped cars and I had to deal with them, then.

"We just missed (the suspension setup) a little bit in the feature here tonight, and you can't miss it with (Overton) right now. He's definitely on. Congratulations to him and his team."

Erb, who lost second to Madden on lap 78 but fought back ahead a lap later amid traffic, was disappointed to miss the second spot but glad to be on the podium.

"I just need to be able to run a little bit lower on the racetrack. My car just wanted to drift out a little bit tonight," Erb said. "We had a good run going there, and I think if (Rick) Eckert wasn't in the way and we were able to clear him, I think we'd have run second. But you know, in a race like this, coming home third, we're happy with that ...

"Hopefully we got all the bugs worked out earlier in the year here and we can get to the middle of the summer here and really get going. We're pleased with the way everything's running and we'll just carry on to the next place."

The race was slowed by four cautions, all for single-car incidents in an event that wrapped up about 10:50 p.m. with fourteen of 26 starters completing 100 laps.

Jason Covert went over the banking and reappeared with right-side damage as the lap-23 yellow appeared. A lap-47 yellow appeared when Colton Flinner spun at the top of turn four. Brent Larson spun in turn two on the 51st lap and Flinner slowed again for a lap-56 yellow.

Cade Dillard starts from the pole position one year after capturing the Firecracker 100 finale for his career-richest Dirt Late Model victory. This time, though, he must go the full 100 laps; last year’s race was reduced to 50 circuits due for television broadcast reasons. … Two others former Firecracker 100 winners — Chris Madden and Brandon Overton — start second and fourth, respectively. … Scott Bloomquist transferred to the feature through his heat after hastily pulling out his second car — a fresh-bodied, unlettered Team Zero machine that he debuted two weeks ago at Eldora Speedway — due to terminal engine trouble that struck his primary No. 0 during hot laps. … Ryan Gustin also thrashed to prep his second car in time for the first heat after experiencing engine woes during practice. He made the cut for his first Firecracker 100 and will start 11th. … A broker rocker arm knocked Colton Flinner out of his heat race, but he is starting the feature in his backup car thanks to a track provisional. … Jared Miley also is running his backup mount in the feature thanks to a track provisional after his primary car’s powerplant went up in a thick cloud of smoke on the last lap of his heat. … WoO provisional spots went to Kyle Strickler, who spun on the homestretch on a late B-main restart, and Ross Robinson, who was nosed out for the final transfer position in the first B-main by Dan Stone. ... After winning the Uncle Sam 30 for non-qualifiers, Mike Benedum opted to forfeit the $2,000 winner's prize and start the 100-lapper from the 29th position.