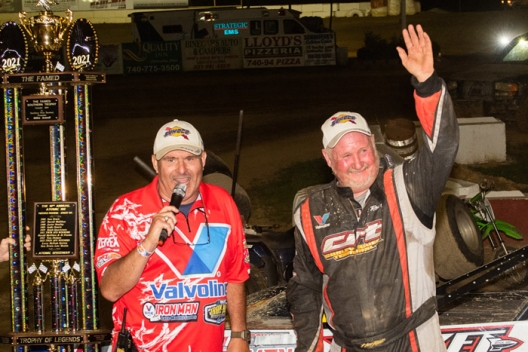 ALMA, Ohio (June 26) — After surviving an attrition-filled 60-lap feature at Atomic Speedway to earn his second career Atomic 100 victory, Rod Conley had plenty of reasons to be happy about his $12,000 win in Saturday’s Valvoline Iron-Man Northern Series event. But his top reason for the large smile on his face as he climbed from his car in victory lane was simple.

“I’m ahead of dad and R.J,” Conley of Wheelersburg, Ohio, told announcer Michael Despain, noting that the victory, Conley’s first in any race since 2018, gave him one more win in Atomic’s long-running event than his father Delmas and younger brother R.J., who have both won the race once in their careers. “It’s been a while since I won one. It’s nice to win one again.”

Conley’s tie-breaking return to victory lane didn’t come easy. He had to advance from the 13th starting spot on a tricky track surface that produced 13 cautions and led to just eight of 24 starters making it to the finish.

But while others fell by the wayside, many from run-ins with the track’s treacherous cushion and others from flat tires, the conservative Conley used the middle lane to keep moving up and save his equipment. Eventually he made it to second behind polesitter and race-long leader Devin Moran of Dresden, Ohio, for a lap 45 restart.

Remaining committed to the middle groove, Conley chased the high-running Moran after the race went back green and made the winning pass on lap 49. Moran slowed with a flat right-rear tire two laps later to cause the race’s final caution, and Conley cruised as the final nine laps ran caution free to win by a margin of 3.438 seconds over runner-up Devin Gilpin of Columbus, Ind., and third-place Tyler Erb of New Waverly, Texas, who both recovered from flat tires midway through the race to log podium finishes.

“I really got lucky and got up there in the middle and thought, ‘whoa, I got something here,’ “ Conley said of his run to the front. “Them guys were up there beating the wall down and tearing their stuff up. I wasn’t going up there.”

Conley’s decision to run lower on the track proved to be a winning strategy as multiple contenders ran into trouble trying to negotiate the faster but also more dangerous high line.

The first to fall was Josh Rice of Verona, Ky., who after earning a $4,000 victory in Friday’s 40-lap feature on the opening night of the Atomic 100 doubleheader weekend, was running third when he got too high and hit the turn one wall on lap seven, ending his night. Later in the event, Tyler Carpenter of Parkersburg, W.Va., gave up the second spot after he got too high in turn four and hit the wall while running second on lap 45.

Of the drivers who didn’t fall victim to the wall, most of them had tire issues. Along with Moran, both Erb and Gilpin suffered flat right-rears while running near the front. Gilpin’s flat came on lap 28, allowing him enough time to rally back to second.

“It’s just crazy how different the track was from last night to tonight on tire wear,” said Gilpin, who finished third in Friday’s 40-lap feature. “I went soft (on tire selection) last night and it made it 40 (laps), then we blew it out tonight on lap 28. It was a blessing and a curse because if we had put a (harder tire) on (to start the race) we wouldn’t have went up through there. It just worked out.

“It’s just a shame to finish third and second, I wish we were racing here again tomorrow night because we might win one.”

Starting from the third position, Erb got to second early in the race and chased Moran until his right-rear tire went flat on lap 37. After restarting 11th, Erb made it to seventh by the lap-51 restart and passed four cars in the final run to the finish including overtaking Hawkins for third on the final lap.

“We’ve been working hard and the car’s been really good. Just can’t catch a break sometimes,” said Erb, a regular on the Lucas Oil Late Model Dirt Series who drove from Minnesota to race at Atomic after the Lucas tour’s weekend doubleheader at Deer Creek Speedway in Spring Valley, Minn., was rained out. “I hated that I blew out. I figured Devin was running a good pace. I never really got pressured. … Once I went to the back, it was really hectic. Rod was really good to come from the back. He’s the only one who didn’t knock the deck out.”