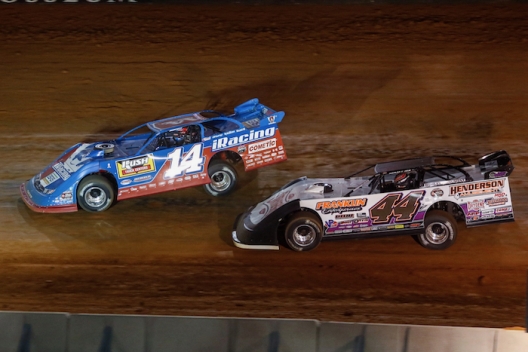 BRISTOL, Tenn. (April 9) — If Josh Richards learned anything from his short-lived pavement racing career, it’s that his pavement racing skills would likely never win him a race at a NASCAR track. Luckily for Richards, there’s one NASCAR track that occasionally gets covered in dirt.

Making the most of his first dirt race at Bristol Motor Speedway, Richards led the final 24 laps of Friday’s 40-lap Bristol Bash feature to earn a $10,000 victory in the opening leg of the famous half-mile track’s World of Outlaws Morton Buildings Late Model Series doubleheader weekend.

“I never thought I’d win a race at Bristol,” said Richards, whose brief NASCAR career included a 17th-place Truck Series finish at Bristol in 2011 and a 19th-place Xfinity Series finish there in 2012. “If anyone saw my asphalt career, it wasn’t very good.”

While Richards’s results on Bristol’s concrete surface during his NASCAR days left much to be desired, his performance on the track’s temporary dirt surface Friday night was nearly flawless. Starting from the outside of the front row, Richards settled in behind polesitter Jimmy Owens of Newport, Tenn., on the race’s initial start and took advantage of Owens’s broken left-rear wheel to assume the lead on lap 16.

Richards turned back multiple challenges from Chris Madden of Gray Court, S.C., after taking the point and pulled away on the race’s final restart with three laps remaining on his way to the victory.

“I know Jimmy had a really fast car,” said Richards, the four-time World of Outlaws champion who earned his tour-leading 78th career series victory. “It was getting a little hairy out there in lapped traffic. I couldn’t steer as good as I wanted to. I knew the guys (crew members) were showing gap (using signals from the pit area) and I knew Madden had a really good car. I just had to hold him off.”

Richards did indeed hold Madden off, crossing the finish line with an advantage of 0.473 of a second. While Richards’s Clint Bowyer Racing Rocket Chassis wasn’t quite perfect on the track’s high-speed, high-banked surface, it was just what he needed to get the win.

“I felt kind of good (about the final caution with three laps remaining) because it kind of spaced us away from lapped traffic,” Richards said. “I felt like if I could just run a clean line we’d be OK. I kept slipping off of four a little bit and I couldn’t steer in the center of one and two very well, but it was enough to get the job done and I can’t thank everyone enough.”

Madden settled for second at the finish after recovering from a botched lap-17 restart that dropped him from second to fifth. Defending WoO champion Brandon Sheppard of New Berlin, Ill., took over the series points lead in finishing third, while Rick Eckert of York, Pa., and Brandon Overton of Evans, Ga., rounded out the race’s top five finishers.

The runner-up effort was slightly disappointing for Madden, who felt that if not for his restart miscue and a few untimely cautions, he could’ve won the race.

“We had a great race car tonight,” Madden said of his self-owned Rocket Chassis. “I cost myself the race. I chose the wrong line on that restart when I chose the outside. We fell back to fifth there, but got a couple breaks and got back up to second, but we did have an outstanding race car.

“We definitely was real good on the long green flag and Josh had gotten free off the corners. I think if it had been 50 laps we probably would’ve got us one.”

“We had a really good car on the longer runs, but I kept getting the top on the restarts and the top wasn’t the place to be,” said Sheppard, who’s still looking for his first feature victory of the season. “Good job to Josh and Chris and Rick. Them guys did a heck of a job. It was a fun clean race. Hopefully they have the track close to that tomorrow so we can have another exciting race.”

While Sheppard’s fifth-to-third run may have been mostly clean and uneventful, the same wasn’t the case for all drivers, particularly Kyle Strickler, who was caught up in the race’s first caution when the tire and wheel that departed Owens’s car ended up directly in his path. Strickler, who Owens had lapped on the previous lap, ran over the tire and wheel, sending his car airborne and upside down.

Strickler climbed from his mangled machine uninjured, but the hard crash compounded what was already a rough night for the WoO rookie contender. Enter the event atop the series points standings, Strickler set fast time in qualifying and won his heat race only to come up light at the scales, forcing him to start from the tail of a consolation race.

Cade Dillard of Robeline, La., had a rough night as well, totaling his race car when his right-front tire cut down and sent him hard into the wall to cause a lap-18 caution. Dillard appeared to be uninjured.

Ricky Weiss of Headingley, Manitoba, was involved in both of the race’s final two cautions, tangling with Brent Larson of Lake Elmo, Wis., on lap 20, then later slowing to cause the final caution on lap 37.

Notes: Richards earned his first WoO victory since since March 6, 2020. That win also came in Tennessee at Duck River Raceway Park in Wheel. … Jonathan Davenport of Blairsville, Ga., who scored a $50,000 victory at Bristol in March, was never a factor in Friday’s race on his way to finishing 11th. … Sixteen of the race’s 25 starters were running at the finish with 16th-place Ricky Weiss the only car running to not finish on the lead lap.