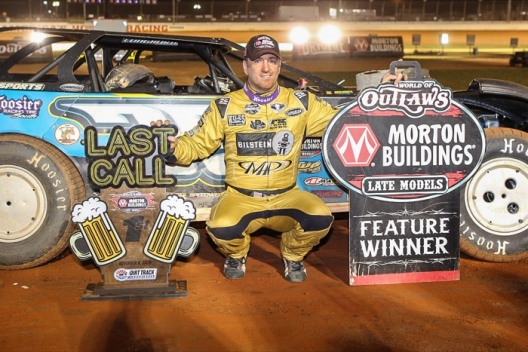 CONCORD, N.C. (Nov. 5) — When a mistake caused Tim McCreadie to drop from fourth to seventh on the opening lap of Thursday’s Last Call feature at The Dirt Track at Charlotte, the Watertown, N.Y., driver was certain his chances of winning were over.

But McCreadie’s Paylor Motorsports Longhorn was too good for him not to make a run toward the front during the 50-lap feature that served as the season finale for the World of Outlaws Morton Buildings Late Model Series. Recovering from his lap-one miscue in dramatic fashion, McCreadie took the lead from Ricky Weiss on a lap-30 restart and held off Brandon Overton’s late charge on his way to earning $12,000 for his first Late Model victory at Charlotte.

“I made a huge mistake in the first corner and I thought ‘man, that’s it’ because it’s so hard to pass here,” said McCreadie, the 2006 World of Outlaws champion, who with his 10th overall victory of the season reached double-digit wins for the first time since 2005. “But we were able to battle back. I didn’t think we could do it especially with the guys we were racing with.”

McCreadie took the checkers with a lead of 0.402 seconds over Weiss of Headingly, Manitoba, who claimed the runner-up finish after Overton of Evans, Ga., slipped high on lap 48 of the 50-lapper while chasing McCreadie through traffic. Overton settled for third ahead of 10th-starting Chris Madden of Gray Court, S.C., in fourth and polesitter Dale McDowell of Chickamauga, Ga., in fifth.

Outdueling McDowell on the race’s initial start, second-starting Weiss pulled away through the race’s opening laps before Stephen Robrerts’s flat tire on lap nine set off a series of cautions that would plague the event. While Weiss held command over Overton through a series of restarts, McCreadie began working his way forward.

By lap 19 McCreadie had worked his way to third when a caution put him side by side with Overton for the restart. McCreadie took advantage of Overton’s decision to pick the inside lane, charging around Overton and into second in turns one and two.

More restarts through the next 10 laps gave McCreadie a couple of shots at Weiss for the lead. He finally made good of the chances, using a restart with 30 laps complete to dive underneath Weiss entering turn one and pull ahead for the lead exiting turn two. Overton followed McCreadie by Weiss into second, but his move to challenge McCreadie during the final laps was cut short when he jumped the cushion.

McCreadie’s first Late Model victory at Charlotte was a special breakthrough not only for him but also for car owners Donald and Gena Bradsher, who live less than two hours from the track in Burlington, N.C.

“On those starts I was just really hooked up and just timed it right a couple of times,“ McCreadie said of his run to the front. “This is Donald and Gena’s hometown place. It’s pretty amazing to win here.”

Weiss, who wrapped up the runner-up spot in the World of Outlaws points chase and the $60,000 price that went with it, settled for second in the tour finale for the second year in a row after crossing the finish line second behind Jimmy Owens of Newport, Tenn., during the second night of the 2019 World of Outlaws World Finals.

“We finished second to Jimmy Owens here (in 2019) and we were coming again at the end. I just felt like if we could’ve maybe ran five or 10 more laps it would’ve been a heck of a race.” Weiss said. “Drydene, a lot of them are here this weekend and I was trying to get the win for them. We ran our heart out, and that’s all we can do.”

Overton, who scored his sixth World of Outlaws victory of the season during Friday’s Last Call opener, was closing in on McCreadie through the race’s closing laps before slipping over the cushion on lap 48, but he felt the race’s outcome was sealed even earlier than that when McCreadie got by him on the lap-19 restart.

“I felt like we had a car to win, but it was just so dirty,” said Overton, who was gunning for what would’ve been his 27th victory of the season. “I chose the bottom on that one restart and let Timmy get up there. It is what it is. He got the position and he never messed up. He had a good car. Congrats to them guys and congrats to Ricky. I went in there a little high at the end. The left front’s knocked off of it and I couldn’t steer as good.”

Brandon Sheppard of New Berlin, Ill., entered the night with his fourth World of Outlaws championship already wrapped up, but his hopes of concluding the campaign with a solid finish were dashed when a flat right-rear tire forced him to slow from the sixth spot with 12 laps remaining. He pitted for a new tire and recovered to finish 13th.

A number of other hopefuls ran into trouble. Chris Ferguson of Mount Holly, N.C., was running fourth when he slowed with a flat left-rear tire on lap 11. Owens of Newport, Tenn., started eighth and ran as high as fifth before contact with Roberts on lap 19 caused Owens’s car to slam hard into the turn-four wall. Josh Richards of Shinnston, W.Va., slowed from a top-10 spot on lap 29 with damage to the right side of his car that was caused when he and Roberts tangled a couple of laps earlier.

Notes: McCreadie earned the 32nd World of Outlaws victory of his career, putting him one win behind Scott Bloomquist for seventh on the tour’s all-time wins list. … The victory was McCreadie’s first on the WoO tour since he won the Firecracker 100 at Lernerville Speedway in Sarver, Pa., on June 22, 2019. … With his qualifying time of 14.183 seconds, Kyle Larson lowered the track’s Late Model track record for the second night in a row. … Three-time WoO champion and series regular Darrell Lanigan of Union, Ky., did not compete in Thursday’s race after suffering a concussion in a heat-race accident Wednesday night. … Dennis Erb Jr. of Carpentersville, Ill., was gave up the 12th spot when he was pushed to the pit area under a lap-nine caution. … Chase Junghans of Manhattan, Kan., slowed and had to have a push to the pits on lap 23. … Sixth-running Ross Bailes of Clover, S.C., spun on the following restart after he and McDowell got together in turn two.

Weather conditions for Thursday’s Last Call finale at The Dirt Track at Charlotte are superb: brilliantly clear skies with afternoon high temperatures in the low 70s. … A 50-car field is signed in for the final World of Outlaws Morton Buildings Late Model Series event of 2020. … Drivers who departed after competing on Wednesday are Darrell Lanigan (suffered a concussion in a Wednesday heat-race incident), Shane Clanton, Freddie Carpenter (engine trouble), Johnny Pursley and Dalton Polston. … With Brandon Sheppard, Ricky Weiss and Cade Dillard locked into positions 1-3 in the WoO points standings, fourth place is the only position still uncertain entering Wednesday’s action. Dennis Erb Jr. holds the fourth spot; Lanigan is currently fifth but isn’t racing due to injury, while sixth-place Chase Junghans is within striking distance of Erb at a deficit of 16 points. … Parker Martin of Milledgeville, Ga., the 15-year-old son of Cochran (Ga.) Speedway promoter Chris Martin, finished 21st Wednesday in his first-ever WoO feature start. … Chris Ferguson of Mount Holly, N.C., is hoping to rebound on his home turf after running in the top five early in Wednesday’s feature before falling back and spinning out of contention.