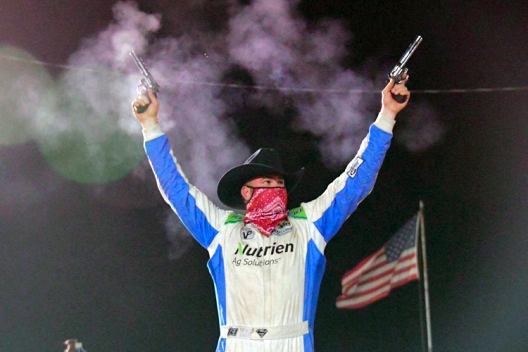 As the first driver to win three features during the six-race miniseries, Davenport pocketed a $10,000 bonus from Keyser Manufacturing. He also earned an additional $3,000 as the champion of the miniseries. Along with his three wins, Davenport piloted his Lance Landers-backed Longhorn Chassis to a pair of runner-up finishes and a third-place.

“It’s so great. It just feels so great to have a consistent car,” said Davenport. “Man we was just battling last year to run in the top 10. This is awesome. We can have a bad night and run third. I almost had to learn how to race again up front ‘cause usually I’m in the back. It’s just totally different.

“Thanks for (car owner) Lance (Landers). I finally … it took me a long time to get him talked into letting me come out here. He finally let us. Now, me and (crew chief) Jason (Durham) has got a long trip back. I know Tyler (Erb) and Ricky (Thornton) and all them guys have to be in Florida (for Georgia-Florida Speedweeks) in four days. Work never stops.”

After a lackluster 2020, Davenport’s stellar Arizona performance has the three-time Lucas Oil Late Model Dirt Series champion excited about 2021. He credited the early-season speed to changes the team made in the offseason.

“This sport is so mentally draining. It’s the most humbling sport there is,” Davenport said. “We can go to Florida and not even be able to line up. I hope that don’t happen. Actually, now I can’t wait to start racing again. I was kinda in a lull there this winter and then we finally decided to switch shock companies and bring Kevin on and build some new cars and I was all ready to come out here and we was working extra hard. So now I’m ready to get the whole season started.”

Davenport and the nearly 60 drivers on hand each of the six nights were challenged by an ever-changing track surface. Johnny Stokes, the Magnolia Motor Speedway track promoter renowned for his track-prepping ability, was tasked with preparing the FK Rod Ends Arizona Speedway surface each night. Rarely were two nights the same this year as Stokes worked diligently to provide drivers with a racy surface. For Sunday’s finale, the track crew dug a little deeper and added a little more water in hope the the surface wouldn’t take rubber during the 50-lapper — 10 more laps than Saturday’s feature.

“This place, when it gets like that, it just blows so much grit and it slows you down,” said Davenport. “When we was in clean air and nobody was in front of us, we finally got to show just how stout this No. 49 car is. Give this to my crew. They worked their tails off between the heat race and the feature there. We made a couple adjustments that we hadn’t made all week and I think it really paid off. It was really, really good right there.”

Erb appeared to have the only car capable of keeping pace with Davenport, but after starting 11th it took him a while to make his presence felt. He was up to eighth on lap 10 and was sixth by lap 23. On a lap-28 restart, Erb slid in front of Shirley, forcing Shirley to get on the brakes as the two made slight contact, while Erb darted by Thornton to take the second spot.

But with a clear track ahead of him, Davenport raced away, building a lead of nearly four seconds. It wasn’t until the leader encountered lapped traffic in the final eight circuits that Erb managed to cut the lead back to a half-second.

“Just didn’t have a good track position there, but those guys were fast all week. J.D., Ricky, Squirrel … ,” said Erb. “Just, I don’t know what to say. You always wish it was a couple more laps, but it was a good run for us. (I) gave it all I had. (The track) rubbered there with about five to go in (turns) one and two and I knew I was pretty much toast unless a lapper held him up. Congrats to him. Somebody had to leave here with a lot of money and hopefully next time it’s us.”

Erb added that with a lot of money on the line and a lot of cars between himself and the leader, he had little choice but to take a few chances, especially on restarts.

“If you woke up in the morning and had a chance to win $35,000, I think everyone out here would have the same mindset,” he said. “It was just hard racing.”

Thornton meanwhile felt as though he wasn’t quite aggressive enough. Still, the Arizona transplant now living in Iowa, was happy with his week, which included a win, two seconds and two third-place finishes.

“I think I need to get a little more aggressive on these restarts and really make my passes,” Thornton said. “I’m driving a little too easy once we get going and it’s kinda letting guys get by. If I get a little more seat time and just kinda get up on the wheel a little harder a little sooner I think we’d be good.”

Notes: Fourteen of the 24 starters finished the race with 10 completing 50 laps. … After a caution-free 40-lapper on Saturday, Sunday’s 50-lap affair was slowed by five cautions, two in the first three laps for Chase Allen of Midlothian, Texas; one on lap 25 for Rodney Sanders of Chandler, Ariz.; and two on lap 28 when Jimmy Mars of Menomonie, Wis., spun collecting Donny Schatz of Fargo, N.D.; and Mike Marlar of Winfield, Tenn., and Jared Landers of Benton, Ark., got together on the restart. …  Fourth-place finisher Brian Shirley ran as high as second, but said he finished about where his car was capable. “We weren’t that good,” Shirley said. “We was anywhere from a third to fifth-place car there. We was pretty good, then on that restart, Turbo (Tyler Erb) went in there and did what he does and just messed everything up.” … Bobby Pierce recorded another top-five but felt his week could have been better. “It’s always good to have a top-five,” Pierce said. “We had three top-fives and three DNFs and every night I feel like we could have been up front. Tonight we really needed to get that heat race win so we could start up front because the track was just so hard to pass there in the beginning. Those restarts I possibly could have been a little bit more aggressive to pick my way through there, but I wanted to race everybody clean.”

The Keyser Manufacturing Wild West Shootout closes its 2020 run at FK Rod Ends Speedway on perhaps the warmest day of the miniseries: afternoon highs nearing 80 under brilliant sunny skies. … Sunday’s Super Late Model car count has dipped to 49 for the finale — down a dozen entries from Saturday, but that number is still larger than the 2020 WWS’s top single-event turnout of 46 cars (on opening night). With less than 50 cars racing, the Super Late Models will run four heats for the first time during this year’s WWS.… A total of 150 cars are in the pit area, including 61 modifieds and 40 X-mods. … The major story of the night is the pursuit of a $35,000 windfall by Jonathan Davenport of Blairsville, Ga., and Tyler Erb of New Waverly, Texas, who, with two wins apiece, are eligible to add the $10,000 three-victory bonus on top of the $25,000 winner’s check posted for Sunday’s 50-lap feature. … During Sunday’s drivers’ meeting, Scott Ward of Jamestown, S.D., was awarded a $1,000 prize for winning the contest for the event’s best western-themed car wrap. His XR1 Rocket sports a western ghost town motif with his sponsors displayed on the outside of the buildings and his car number represented on the quarter-panels as “Old No. 37 Saloon.” … Bobby Pierce of Oakwood, Ill., who won three WWS features in both 2017 and ’19, is winless in this odd-numbered year entering tonight’s finale. He will hit the track after bolting in his backup engine because he retired early from Saturday’s A-main with terminal motor trouble.