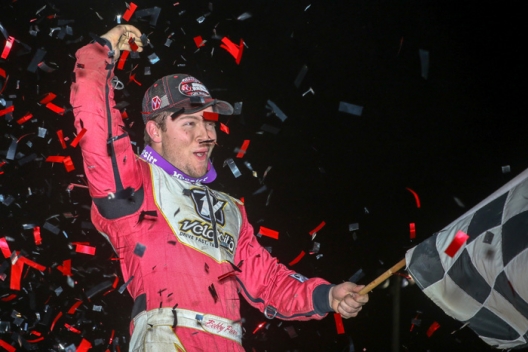 FARMER CITY, Ill. (April 3) — Bobby Pierce had already experienced several excruciating near-misses in World of Outlaws Morton Buildings Late Model Series competition. He wasn’t about to let another one slip through his fingers.

So when Pierce ceded the lead to Cade Dillard on a restart after pacing the first 70 circuits of Saturday night’s 75-lap Illini 100 finale at Farmer City Raceway, he reached inside himself for another gear to make sure he didn’t leave the pit area once again mourning a bitter defeat on the national tour.

Summoning one last push during the five-lap sprint to the finish, Pierce, 24, of Oakwood, Ill., built up his momentum on the outside of the quarter-mile oval to catch Dillard with two laps remaining. He then surged to the inside of the track through turns three and four to execute a slider on the Robeline, La., driver that propelled him into the lead as the white flag was displayed and on to a dramatic $20,000 triumph.

With his thrilling recovery, Pierce not only became the third home-state winner of the Illini 100 weekend headliner — joining New Berlin’s Brandon Sheppard and Moweaqua’s Shannon Babb — but also at long last broke through to add an elusive WoO checkered flag to his bulging resume.

“I was kicking myself in the butt there,” Pierce said of his stumble on the race’s lone restart that cost him the lead he had controlled from the initial green flag. “After that I just seen red — literally, Cade’s car is red — and whatever it took … not to get into him, but just if I had to fly off the track to find the little bit left of the cushion that was up there. I was right on the edge.”

Sheppard, a three-time Illini 100 winner and WoO champion, finished third after starting 18th in the Rocket Chassis house car. The 28-year-old superstar thrust himself into the mix at the front of the pack following the lap-70 restart but didn’t have enough time to pull off an improbable rally, crossing the finish line just over two-tenths of a second behind Dillard.

Completing the top five was Chris Madden of Gray Court, S.C., who ran second for laps 3-39 in his Franklin Enterprises XR1 Rocket, and 15th-starter Rick Eckert of York, Pa., who slid his Allen Murray-owned XR1 Rocket into fifth place on lap 73.

Pierce, who started on the front-row outside veteran Kevin Weaver of Gibson City, Ill., effectively controlled the action throughout the 70-lap stretch of uninterrupted racing that highlighted the event. He faced some marginal early pressure from Madden while negotiating lapped traffic and with less than 20 laps remaining was challenged briefly by Ricky Thornton Jr. of Chandler, Ariz., but he had opened up some breathing room as the five-to-go signal was reached.

Then the race’s complexion changed drastically on lap 70 when Thornton’s SSI Motorsports car limped to a stop between turns one and two due to a broken j-bar and driveshaft to trigger the lone caution flag. With Thornton relinquishing second place and his hopes for victory, Dillard, who had just flashed late-race speed with his lap-67 pass of Madden for third, restarted behind Pierce and appeared primed to bid for the top prize.

When the green flag returned and Pierce almost immediately bounced his No. 32 on the track’s cushion, Dillard, 29, shot off the inside of turn two to assume command.

“My dad said he was about to kill me on that restart there when I did that,” Pierce said of his Hall of Fame father and chassis builder Bob. “Luckily we pulled it off. Just the right amount of laps left to do it and have the last lap to seal the deal there.”

Dillard offered congratulations to Pierce after the race and tried to savor a runner-up finish that marked his first WoO outing better than 12th since he placed second in Jan. 14’s season opener at Volusia Speedway Park in Barberville, Fla., but he felt he should have done more to prevent Pierce’s dramatics.

“We had such a green-flag run, and honestly I didn’t even know where I was at,” said Dillard, who is in his third season as a WoO regular. “Then we had the caution and they said we were third, and then Thornton fell out and that put us in second.

“I was probably just too conservative at the end. I probably should’ve just, when I got to the lead, ripped the top. I was hoping not to get took out being up there in the lead like that, but I was so good through the middle and the bottom the whole race and I stayed there. By the time (crew chief) Donnie (Pederson) pointed at me to get up, it was too late at that point.

“We had a good car,” he added, “but I probably should’ve been a little more aggressive at the end.”

It took Pierce’s special brand of aggressiveness to overcome Dillard, though. Pierce dearly wanted to shake the WoO monkey off his back.

“Just to get it for myself, but my family and friends too,” Pierce said of finally putting his name on the WoO tour’s all-time win list. “They’ve wanted it as bad as me. They know I’ve been so close. Heck, back in 2014 when me and Jimmy Owens were going at it at Cedar Lake (in the WoO-sanctioned USA Nationals) … it’s just crazy to finally get it. It feels like the World 100, it really does.

Notes: Pierce was the second first-time WoO winner in as many nights, joining Friday night’s 25-lap feature victor Mike Spatola of Manhattan, Ill., who finished eighth in Saturday’s finale. … Pierce’s previous triumph this season came in a Feb. 9 DIRTcar-sanctioned feature at Volusia Speedway Park. … Sheppard’s third-place finish came after he qualified through a B-main for the second consecutive night. “Hat’s off to my guys for sticking behind me,” he said. “We dug ourselves a hole qualifying and it just made for a rough night. You can’t do that when you’re racing this tough of competition.” … Shannon Babb, the 2014 Illini 100 winner, reached third place early in the feature but lost two spots when he slipped off the track on lap 37. He never recovered as he settled for a sixth-place finish. … WoO points leader Kyle Strickler didn’t log a qualifying lap due to terminal engine trouble that struck his PCC Motorsports car as he hit the track for time trials. With a second Longhorn car not yet race ready, he immediately commenced an engine change after being pushed back to the pits; the work wasn’t done until after the heats so he had to use a provisional, but he advanced from the 23rd starting spot to finish 13th, keeping him atop the standings by 24 markers over Sheppard. …Ryan Unzicker, who finished second in Friday’s feature, scratched from Saturday’s program before heat action due to a broken rearend in his new MB Customs car. … Darrell Lanigan, Scott Bloomquist, Brent Larson and Blake Spencer used WoO emergency provisionals to start the 75-lapper; Chase Junghans was also eligible for one, but the struggling Kansan declined the spot and loaded up early.