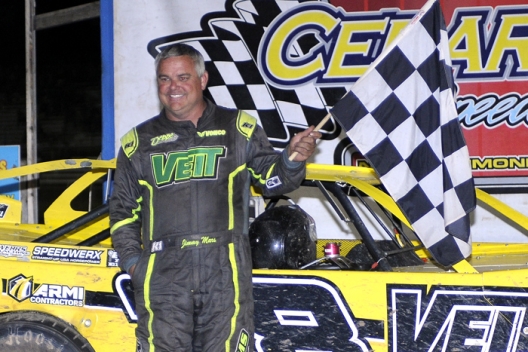 Mars, who led laps 25-27 before slipping back behind Kaanta just past the midway point, summoned a final charge and found a sliver of racing room against the frontstretch wall to win the third Late Model feature in three nights of action at the 3/8-mile oval

"We've been trying to get this one again here for a while," said Mars, who captured his sixth Masters feature overall and first since 2009. "This is cool."

Kaanta, who led 33 of 50 feature laps, finish nine-hundredths of a second behind in the runner-up position while ninth-starting Nick Anvelink of Navarino, Wis., was third. James Giossi of Hudson, Wis., who led the first 13 laps, was fourth and A.J. Diemel of Elk Mound, Wis., ran as high as third before settling for fifth.

Jake Redetzke of Eau Claire, Wis., who picked up $3,000 and $5,000 paydays with Thursday and Friday victories, finished sixth in the weekend finale.

Giossi jumped into lead from his pole position and took command early, but his fellow front-row starter Kaanta went ahead on the 14th lap as Mars got rolling on the high side.

Mars went around Kaanta to take the lead on the 25th lap, but Kaanta kept plugging away in the low groove and went back under Mars three laps later. Kaanta pulled away to more comfortable leads, holding a half-straightaway margin at times even in the final 10 laps.

But Mars used the extreme high groove on the final lap to gain the momentum for the winning pass at the flagstand.

"Man, I don't know, (Kaanta) ran such a good race," said Mars, who has 55 career Late Model victories at Cedar Lake. "He was running through the middle super good and he just gave me just enough room against the wall there that I had a shot. That was wild."

Mars slung his car to the high side in the closing laps.

"That's really all I had. John was way better on the bottom and the middle there. I used my tire up on the cushion early," he said. "It was wild."

The lone caution appeared on the 11th lap for a slowing Jeffrey Massingill, the 50-lapper's first retiree. Sixteen of 24 starters were running at the finish.