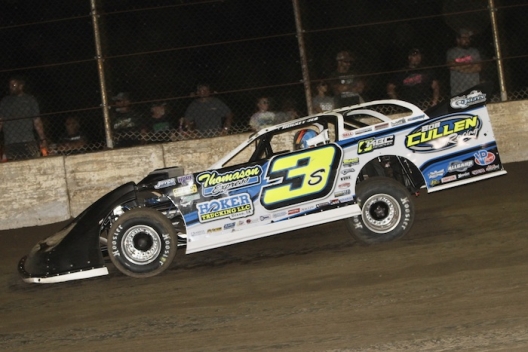 La SALLE, Ill. — Four-time and defending series champion Brian Shirley went winless during the first week of the DIRTcar Summer Nationals, so opening the second week of action with a $5,000 victory at La Salle Speedway was a nice turnaround for the Chatham, Ill., driver.

But the 40-year-old wasn't exactly spraying Champagne in victory lane despite leading all 40 laps and leading comfortably virtually all the way in the tour's sixth event.

"I feel like we've been, you know, a little bit off, and this is definitely nothing to get excited about," Shirley said. "We're here to grind this week. It's in our backyard and we need to get some wins."

His 34th career series victory — fourth on the all-time list — gets his second week off to a good start as he moves into third in the series points chase.

The pole-starting Shirley took the checkers 1.260 seconds ahead of fellow front-row starter Garrett Alberson of Las Cruces, N.M., who took second from Billy Moyer Jr. of Batesville, Ark., on the 24th lap in his Roberts Motorsports ride. Ryan Unzicker of El Paso, Ill., was third with Moyer fourth and ninth-starting Chris Simpson of Oxford, Iowa, rounding out the top five in the caution-free event that was over in 10 minutes.

Series points leader Bobby Pierce of Oakwood, Ill., had a flat left-rear tire running third in his heat race and came from 19th to ninth in the main event.

Lapped traffic caused a few tense moments for Shirley, but he built leads of nearly a straightaway while leading Moyer and then Alberson on the high-banked quarter-mile oval promoted by Tony Izzo Jr.

"I was really a little nervous because I didn't know how much they could catch me as far as when I got stuck behind them guys," Shirley said. "There was a couple of times I had to make my own lane, and then when I got to (lapped cars) running just as good me, it was a little tougher. But I kept an eye on (crewman and spotter) Aaron (Mitchell) and he kept the sticks pretty good apart (signaling a comfortable lead) the whole time. All in all I'm just blessed."

Shirley completed the victory to win his third straight tour event at La Salle. His previous wins came last season and in 2018 (the track didn't host an event in 2019).

"It's been pretty good to me," Shirley said. "I've gotta thank Tony Izzo for doing the best he could do. We got a lot of rain last night and they said it rained here this morning, so all in all, I was glad he got it in. It helped us get that first win and hopefully there's more to come."

Notes: Shirley dedicated the victory to his wife Shannon, who battles persistent health issues. "People don't realize it is how tough it is for us to go racing with my wife and my kids," Shirley said in victory lane. "She's actually in the hospital right now, so this one is for her." ... Runner-up Garrett Alberson was looking for his second straight major victory at La Salle. He earned a career-high $12,000 in May 8's Thaw Brawl on the MARS Racing Series. ... A dozen drivers completed 40 laps in the Summer Nationals feature. ... Ashton Winger rolled his primary car in time trials. He wasn't injured in the turn-two incident and went to a backup car for the rest of the night, starting 11th in the feature and getting up to fifth. He ended up hitting the wall on the last lap and finished eighth. ... Previous series winner Shannon Babb was the first retiree, parking after 11 laps. ... Frank Heckenast Jr. was also an early retiree.

Series officials have once again amended the tour’s tire rule in attempts to combat the ongoing tire shortage. The series had already limited teams to five tires per event before the start of this year’s tour, but after the first week of competition have added a requirement that teams run an LM-40, the hardest tire compound available to DIRTcar competitors, on the right-rear of the car in all events. … Among notable drivers making their first appearances on this year’s tour are Cade Dillard of Robeline, La., and Garrett Alberson of Las Cruces, N.M. Both drivers plan to only enter Wednesday’s event at La Salle before heading in opposite directions to compete in national touring series events this weekend. Dillard, a regular on the World of Outlaws Morton Buildings Late Model Series will make the nine-hour overnight drive to Lernerville Speedway in Sarver, Pa., where he’s the defending race winner of the $30,000-to-win Firecracker 100 that kicks off Thursday with the first of two preliminary nights. Meanwhile, Alberson, who earned a $12,000 MARS-sanctioned victory at La Salle earlier this season, will head to Deer Creek Speedway in Spring Valley, Minn., for events on Friday and Saturday that are co-sanctioned by the Lucas Oil Late Model Dirt Series and the Lucas Oil MLRA tour. Alberson is currently second in MLRA points. ... Chris Simpson of Oxford, Iowa, enters his third straight series event after finishing ninth and 11th at Tri-City and Fairbury respectively. The most recent of his two Summer Nationals victories came at La Salle in 2015. ... Shannon Babb of Moweaqua, Ill., enters La Salle's event looking for the 100th Summer Nationals victory of his career after getting his 99th win Saturday at Fairbury. The four-time series champion has won three series events at La Salle, but the most recent win came in 2013.