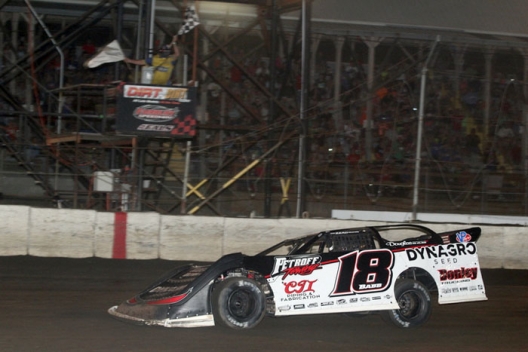 FAIRBURY, Ill. — Shannon Babb has known longtime racing supporter Ed Petroff long enough to realize that he has some strong opinions. So the Moweaqua, Ill., driver could only imagine what Petroff was muttering to himself Saturday at Fairbury Speedway when Babb dropped to the low groove and fell back to the eighth spot.

Babb figured the towing company owner "was cussing me already" for falling back so far in the DIRTcar Summer Nationals event with polesitter Brian Shirley in command through the first half of the race.

But Babb's low-groove choice eventually paid off as he got rolling shortly after the halfway mark then came alive after the 50-lapper's lone caution, slipping under Tanner English on the 35th lap and drawing away for a comfortable 3.390-second victory, the four-time series champs 99th in tour history.

"Man, the track was impressive. It really was. And with the competition out there, it's amazing," Babb said in victory lane. "Tanner and (Shirley) had checked out and I knew Devin (Moran) was going to be tough starting on the outside (of the front row). The top was really good at the beginning. I just knew I didn't want to abuse my tires. I was the first one to hit the bottom and I hit the bottom and ran back to eighth or ninth. ... (before the low groove) came in for us."

English, the Benton, Ky., driver gunning for his second straight series victory and leading laps 29-34, settled for second with Dresden, Ohio's Moran rallying back to third after slipping back to fifth. Frank Heckenast Jr. of Frankfort, Ill., nearly grabbed the lead twice with high-side runs before settling for fourth and series points leader Bobby Pierce of Oakwood, Ill., rounded out the top five.

Shirley, who got into the wall at the end of the frontstretch just before the race's lone yellow, slipped back to finish seventh after leading the first 28 laps.

Babb's victory — one shy of the all-time victory mark of Billy Moyer's 100 — came on the sixth birthday of his older daughter Finnlee. He won at Fairbury on the tour six years earlier the day after Finnlee was born.

"It's awesome. It's special right here at Fairbury," Babb said. "A $10,000-to-win Summer Nationals race has always meant a lot to us. Growing up, it was everything. These are big races. Team Zero all the way and Penske Shocks and Clements Engines — they've been behind us. I know a lot of people has probably been laughing at us, but here we are, we made it to the front.

"The energy at Fairbury is unreal. The staff that works here, just hat's off to those guys. It's impressive. Like I said, this is the highlight of our season coming here, and we can't wait to get her at the end of the July (for the $50,000-to-win Prairie Dirt Classic on the World of Outlaws Morton Buildings Late Model Series). They're really coughing up some money for that race."

English had been running in the low groove, but he was not match for Babb late in the race.

"I didn't know that he was even close until that caution came out," English said. "He just found something there on that bottom. I tried to run his line, and I couldn't stay down there. I was a little bit too tight in the center (of the corner). It'd push out. I'd get in the black (portion of the track) and skate across."

Sunday's sixth round of the tour is set for Plymouth (Ind.) Speedway with a $5,000 as the series concludes its first week of action before a two-day break.

Polesitter Brian Shirley, fourth on the DIRTcar Summer Nationals all-time win list with 33 victories, is still seeking his first Summer Nationals win of 2021. Shirley led all 10 laps of his heat, finishing a second ahead of Billy Moyer Jr. of Batesville, Ark. … Bobby Pierce of Oakwood, Ill., will start seventh. Pierce ranks fifth on the tour’s win list with 29 career Summer Nationals victories, but has never won a series race at Fairbury. Pierce fell back to fifth at the start of his heat and was in danger of failing to transfer through his heat race, but rallied to finish third. … Seeking his third career Summer Nationals win, Devin Moran of Dresden, Ohio, starts alongside Shirley on the front row. … Fresh off a $10,000 victory Friday at Tri-City Speedway, his second-ever Summer Nationals win, Tanner English of Benton, Ky., starts third. English won the first heat. … Ashton Winger of Hampton, Ga., is looking for a bit of redemption after crashing out of Friday’s race on a restart with three laps remaining. Winger rallied from 17th to seventh and was trying to make a high-side run but tagged the front-stretch wall. … After arriving late, Mike Spatola of Manhattan, Ill., rallied from the tail of the third heat to fifth and then won the consolation race to earn the 17th starting position. … After being in contention to win two of the first four series races, Ryan Unzicker of El Paso, Ill., was forced to use a provisional. … Other provisionals went to Bob Gardner, Joe Godsey and Jeffrey Ledford.