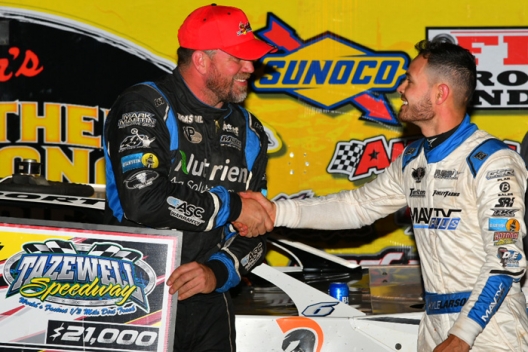 TAZEWELL, Tenn. — On Saturday, Jonathan Davenport picked up a lucrative victory on a high-banked East Tennessee track for the second time in three weekends.

The quarter-mile Tazewell Speedway is obviously quite a bit shorter than the dirt-covered Bristol Motor Speedway where Davenport pocketed $50,000 on March 20, but the Blairsville, Ga., was just as effective in collecting $21,000 in the inaugural Lil' Bill Corum Memorial.

Davenport kept runner-up Kyle Larson and third-finishing Tyler Erb in check through the middle stages of the 75-lap feature, then pulled away late in the event co-sanctioned by the Valvoline Iron-Man Racing Series and Schaeffer's Spring Nationals to win by more than seven seconds, a half-track margin.

"I definitely love coming here. This place is always packed out. Love all these fans coming here and we get great support," said Davenport, who plans a return to the half-mile Bristol next weekend for World of Outlaws Morton Buildings Late Model Series competition. "Thanks to my crew, they've been working their tails off. This is the same car that we ran at Bristol and I don't see why we don't take it back there next week. This thing's pretty awesome."

Larson held the second spot most of the way — the Elk Grove, Calif., driver lost it to Erb on a lap-40 restart but regained it with about 10 laps remaining — in finishing second while Erb, the New Waverly, Texas, driver for Ohio-based Best Performance Motorsports, settled for third after setting fast time. Dale McDowell of Chickamauga, Ga., advanced six positions to finish fourth and pole-starting Donald McIntosh of Dawsonville, Ga., rounded out the top five.

"This place is so elbows up and you just gotta get up on the wheel and drive it," said Davenport, who launched into the lead from outside the front row. "It was a little hard to pass in (turns) one and two down here, but I could get a good run and slide 'em through (turns) three and four. There were a couple of (passes) there were probably questionable, but hopefully they knew I was the leader and gave me a little bit of a break there."

Larson and Erb were within a half-straightaway of him just past the halfway point, but they couldn't keep up as the laps ticked down.

"This thing was just phenomenal. I actually moved up a little higher through (turns) one and two and I could get a really big run on the lapped cars. I kind of got stalled out there behind one (lapped car), and I know Kyle is really good through lapped traffic," the winner said. "I could see (crew chief) Jason (Durham) giving me signals — I thought it was him, this place is so fast — but I knew I had to get by those lapped cars there and I could see clean racetrack up above them, so that's where I wanted to get. I did turn it up there a notch the last 10 laps and got by a couple of lapped cars."

Larson, the NASCAR and open-wheel star, got his first taste of one of the country's highest-banked dirt tracks.

"It's awesome. I've been to places that are banked ... but nothing quite like this. So this is an awesome place. I've watched (races) here in years past, and getting to come here, videos and pictures don't do it any justice. This place is extremely banked and a lot of fun, too," he said. "I had a good car there. Track position was important and (Davenport) did a really good job through lapped traffic. I didn't get a good restart (on lap 40 in losing second to Erb), and then got back by Terbo to get to second. It was pretty locked down at that point so I just tried to ride it out and hope for a caution."

After setting fast time, Erb couldn't add a heat race victory and started fifth in the main event. It was too much to overcome.

"We did all we could," he said. "I just needed to win the heat race and put ourselves in a better (feature starting) spot. But these two, they were really fast. They were good at Bristol and I'm just happy to come home third. It's crazy racing here."

The feature was slowed by three cautions, none for serious incidents. Mike Marlar spun for a lap-five yellow, Michael Chilton lost a right-rear wheel for a lap-14 slowdown and Jason Trammell dropped a driveshaft on lap 40.

Notes: Davenport has five victories overall in 2021, two in Tennessee and three during January's Keyser Manufacturing Wild West Shootout at FK Rod Ends Arizona Speedway. ... He won his third career Spring Nationals feature and second on the Iron-Man tour, which has split into North and South divisions in 2021. ... Fourteen of 23 scheduled starters were running at the finish. ... Stacy Boles didn't take the green. He broke an axle during warmup laps before the main event and lost a wheel, ending his race before it began.