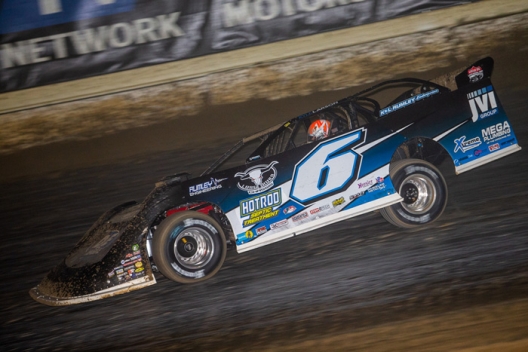 ELLISVILLE, Fla. — Kyle Larson's winter racing schedule is a busy one. He was in Tulsa, Okla., to capture last weekend's Chili Bowl Nationals in a midget, and his return to NASCAR Cup Series action begins with the season-opening Daytona 500.

But one of the best multidiscipline drivers in the history of auto racing managed to sneak in another January event — much to the chagrin of drivers on the Lucas Oil Late Model Dirt Series.

And what a performance it was.

The 28-year-old open-wheel star with just a handful of Late Model starts routed the national touring field, overtaking pole-starting Tyler Erb on the 14th lap and pulling away the rest of the caution-free 50-lapper to win by a whopping 15 seconds while lapping all but seven competitors.

A race that was shaping up to be competitive after a dozen laps turned into a laugher before halfway as Larson pulled away to a 4.3-second lead on lap 25, then stretched it even further to lead by eight, 10, 12 and finally 15 seconds while lapping most of the field.

Larson's biggest problem was his vision late in the race after he ran out of the clear tearoffs on his helmet, but even that couldn't slow him. His biggest problem before the race? Confidence in racing all over a slick track in the full-fendered car.

Whatever he did worked to perfection.

"Gosh, my race car was so fast," Larson added. "I could go anywhere I wanted. Kevin Rumley and everyone who works on this thing, it's such a pleasure to get to team up with them and get our second win together on live TV on MavTV. It's really, really special."

Among six heat winners — the feature winner was glad to catch a break with a caution in his heat race after briefly losing the lead to Jonathan Davenport — Larson made the most of his third-row starting spot while Erb jumped into the early lead.

"I got to fourth right away and (Brandon) Overton and those three that are in front of me are amazing race car drivers and I was able to stay with 'em, and I was like 'OK, I'm really good here.' I got the top going in (turns) one and two and I could follow the top, I could diamond it, I could run the bottom," Larson said. "I really could go anywhere I wanted.

"Once I got to traffic, I knew I had a much better car than Erb. He was searching for where to go, and like I said, if he went somewhere I could go somewhere different. I had fun racing with him there and just happy no cautions came out, because I didn't want to fight off anybody. I didn't know how close second place was (behind him)."

Obviously it wasn't close and Moran, who also struggled with vision problems when he tugged all his tearoffs from his helmet early in the race, said he "couldn't see (Larson) anyways. He was too far out in front of us."

Moran, in his first race since offseason surgery on his left wrist, felt some pain but manhandled his car to a runner-up finish as Georgia-Florida Speedweeks ramps up.

"It's kind of rerun from last year. We were really good down here last year and fell back a little more than we did tonight, so I felt like we made the right adjustments on this Tye Twarog Racing Longhorn," Moran said. "The track was fun. They moved those (infield) tires out a little bit and there was people all over all the place. If it wasn't for (Larson) it would've been a really good race, but there's a reason he races on Sundays."

Marlar, who recently announced plans for his first full-season run on the Lucas Oil Series, got better late in the race in advancing five positions.

"It was a good night for sure. There was one time in the race I almost spun with a guy down there, and any little thing can make you or break you," he said. "Hopefully this year we can be consistently good and run up front all the time and try to not have those bad nights — (they) go further than people think."

He was honored to be chasing the talented winner.

"I'm really enjoying Kyle's racing with us and he's a super-talent and I think he'll go down in history as one of the best drivers in history, the (A.J.) Foyts, Mario Andretti-types," Marlar said. "It's awesome to get to race with him and get here on the podium with him and maybe we'll get him next time."

Notes: All 25 starters were running at the finish with eight cars on the lead lap, the next 16 one lap down and tail-finishing Stormy Scott two laps down. ... Mike Marlar's fast time lowered the track record. ... Lucas Oil drivers head to East Bay Raceway Park in Gibsonton, Fla., for a Sunday practice preceding six nights of series action at the 45th annual Winternationals at the Tampa-area oval.

The Lucas Oil Series portion of Darrell Lanigan’s Speedweeks has come to a quick end. After getting into the wall in his heat race, he has called it a night and plans to head home to regroup before returning to Florida for Volusia Speedway Park’s DIRTcar Nationals Feb. 1-6. Lanigan had planned to run all of Lucas Oil’s Speedweeks races if things had gone well. ... Wil Herrington’s Lucas Oil Series debut got off to a rough start when a broken four-bar bolt sent him to the infield early in his heat race. ... The track surface presented drivers with different challenges on each end of the track in qualifying with turns one and two being hammer-down around the top and turns three and four being slow and slick around the bottom. ... Ryan Crane of Panama City, Fla., didn’t get to make a qualifying run after blowing a valve cover gasket in hot laps. After replacing the gasket, Crane started from the tail of his heat race.

After Friday’s event was rained out, the Lucas Oil Series kicks off its 2021 season with a $15,000-to-win event at All-Tech Raceway near Lake Cty, Fla. The event is also the first in a stretch of nine races at three tracks over 11 days as part of Georgia-Florida Speedweeks. The series is off Sunday before heading to East Bay Raceway Park in Gibsonton, Fla., for six straight nights of racing Monday through Saturday. The tour wraps up its Speedweeks slate with a pair of weekday events at Bubba Raceway Park in Ocala, Fla., Feb. 1-2. … Speedweeks started with Jan. 14-16’s Sunshine Nationals at Volusia Speedway Park in Barberville, Fla., where Lucas Oil regulars Kyle Bronson of Brandon, Fla., and Kyle Strickler of Mooresville, N.C., split victories and a third event was rained out. … Strickler won the Volusia event, his first World of Outlaws Late Model Dirt Series victory, in his own Longhorn Chassis. At All-Tech, he’s fielding a Rocket Chassis for Hope, Ind.-based PCC Motorsports that he’ll drive for in his Lucas Oil rookie campaign. … NASCAR star and dirt open-wheel ace Kyle Larson of Elk Grove, Calif., will drive the Rumley Motorsports No. 6 Longhorn at All-Tech. Larson, who won the prestigious Chili Bowl Nationals midget event on Jan. 16, is making his fifth appearance in Rumley’s machine. He famously won on Aug. 29 in his second ever Dirt Late Model race in Lucas Oil action at Port Royal (Pa.) Raceway Park. … Shane Clanton of Zebulon, Ga., is making his first appearance of 2021 after battling Covid-19 earlier this month. Clanton, who was hospitalized for a week with Covid-19 and pneumonia and was discharged on Jan. 12, finished sixth in Lucas Oil points last season after switching from WoO. … Danny Snyder of Green Lane, Pa., is kicking off his first Speedweeks trip. Entering his fifth year of Super Late Model racing, the 33-year-old full-time mechanic plans to also compete at East Bay and Ocala. … Northeast big-block modified star and NASCAR Camping World Truck Series regular Stewart Friesen is entering his first Super Late Model race as he plans to add a part-time Late Model effort to his busy 2021 schedule.  Friesen, 37, of Sprakers, N.Y., is fielding a Cornett-powered Longhorn Chassis for his Halmar Friesen Racing team. … Crate standout Wil Herrington of Cochran, Ga., is making his first national tour appearance at All-Tech in a David Poole-owned Rocket. The 2020 Crate Racin’ USA champ made a handful of starts in Poole’s No. 00 last season in his only other open-engine races. Herrington plans to run All-Tech and East Bay. His trip started with a setback after a right-rear blow out during Thursday’s practice caused heavy suspension damage to the rear of his car and destroyed the right side of the car’s body panels. … Six teams made the nearly 2,000-mile drive to All-Tech from Arizona Speedway in Queen Creek, Ariz., after competing in the six-race Jan. 9-17 Keyser Manufacturing Wild West Shootout: Jonathan Davenport of Blairsville, Ga., who won three WWS races, Tyler Erb (two wins) of New Waverly, Texas, Ricky Thornton Jr. (one win) of Chandler, Ariz., Mike Marlar of Winfield, Tenn., Brian Shirley of Chatham, Ill., and Stormy Scott of Las Cruces, N.M.,  . … With both of his children now in college, Todd Brennan of  Zanesville, Ohio, plans to travel more broadly this season in preparation for a Lucas Oil rookie campaign in 2022. Brennan, who is racing at Speedweeks for the second straight season has veteran driver Chris Garnes as his crew chief for the Florida trip. … Sam Seawright of Rainsville, Ala., is entering his first Speedweeks race. The 2020 Southern All Stars Rookie of the Year only plans to compete at All-Tech.