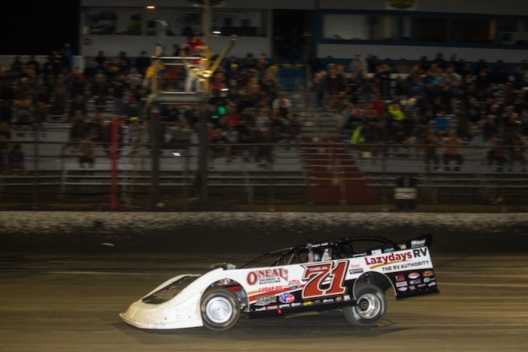 GIBSONTON, Fla. — Hudson O’Neal was just 18 years old when he won his first career East Bay Winternationals feature. In the nearly two years since that victory on Feb. 7, 2019, the Martinsville, Ind., driver has shown exponential growth both on and off the track.

Monday at East Bay Raceway Park, the fourth-starting O’Neal handled the lengthy, caution-filled 30-lap feature with the savvy of a veteran. He battled up front throughout the main event, was never too far away from the leaders, patiently waited for the right opportunity to grab the top spot and then pounced when the opportunity presented itself.

O’Neal took the lead from Devin Moran of Dresden, Ohio, just after a lap-17 restart and led the rest of the way to win the Wrisco Winternationals opener. He held off Brandon Sheppard on a green-white-checkered finish, earning $5,000 for his second career Lucas Oil Late Model Dirt Series triumph at East Bay and the eighth series win of his career.

“We went with a little different tire choice than everybody else and I was a little worried at the beginning rolling down this frontstretch seeing everybody had on different tires,” O’Neal said. “I knew hopefully the racetrack would get slow enough to where that tire would come in and play a factor and I really thing it did and I tried to stay after it.

"This Rocket (XR1 chassis), man it’s been awesome. We didn’t have anything to show for how good we were (Saturday) at All-Tech and I’m just happy I could redeem myself here.”

Sheppard, who started third, finished second, while second-starting Brandon Overton of Evans, Ga., got by Moran for the final spot on the podium. Moran, who charged from the 22nd starting spot to briefly take the lead on lap 17, settled for fourth while Earl Pearson Jr. of Jacksonville, Fla., rallied back to complete the top five following an opening-lap skirmish that also collected Tyler Bruening of Decorah, Iowa, and Tony Jackson Jr. of Lebanon, Mo.

The victory is O’Neal’s first since joining Maryville, Tenn.-based Double Down Motorsports in the offseason and comes in just his second start with the team. It was a satisfying triumph following a 2020 season filled with career uncertainly as O’Neal bounced between two different teams.

“A new team, new crew, new everything, so it’s awesome to come out here and have this early success,” O’Neal said. “It’s a boost for not only me, but for the crew too, and the car owners and everybody involved, you know. It’s a whole team effort and I just couldn’t do it without each and every one of them. They all do so much and it’s just unbelievable to get a win here on the first night of East Bay.

“(Winning) definitely makes our decision on changes a lot easier. You know I’ve got to give a big shout out to Trevor and Eric and Tom and everybody involved and Ryan and (team owner) Roger (Sellars). They’ve all sacrificed a lot to do this and I’m happy to put them in victory lane.”

After winning the fifth heat race, O’Neal felt like he had a car capable of winning the feature, but he had to wait as others — first polesitter Kyle Bronson of nearby Brandon, Fla., and fifth-starting Tyler Erb of New Waverly, Texas, and then the hard-charging Moran — took their turn up front.

As drivers struggled to find traction on the slippery track surface that seemed more like a skating rink than a dirt oval for 900-horsepower machines, O’Neal, Sheppard and Overton stayed poised. Drivers frequently ran into trouble, resulting in 11 cautions and race that lasted more than an hour. With grip at a premium, the longest green flag stretch was seven circuits.

“It definitely felt like a long race, but congratulations to Hudson, he did a great job,” said Sheppard. “It was definitely a tricky racetrack for sure. It’s so slippery out there you lose your front tires if your not sideways enough … you can’t steer at all.”

Overton summed it up succinctly.

“Sheet of ice,” Overton said. “The steering wheel don’t work. We’re just kinda hanging on to ‘em. You gotta drive ‘em with the gas pedal. It makes it exciting to watch, that’s for sure. You know, we earned our paycheck tonight.”

While it was a struggle for many, O’Neal, Sheppard and Overton managed to stay well enough ahead of the trouble that plagued their colleagues. And the repeated slow downs certainly aided Moran as he maneuvered forward from the 11th row.

Moran, who won last year’s Monday Winternationals feature, was up to fifth by lap 10 and appeared to have the car to beat. He took the lead from Erb just as the sixth caution waved on lap 17, thus handing the spot back to Erb. Two laps later, contact between Erb and Moran on yet another restart sent Erb spinning. Sheppard had just taken the lead from Erb, but because a lap had not been completed, Moran, who had restarted in second behind Erb, inherited the lead while Erb was sent to the tail for drawing the caution.

Moran’s time on the point was short-lived, however as O’Neal shot by to grab the lead, which he held on lap 20 when the race’s ninth caution appeared. Two more cautions slowed the pace — on lap 21 and lap 28 — but  on each restart O’Neal was able to keep Sheppard at bay.

Notes: When Hudson O’Neal won his first Winternationals feature in 2019, he became just the third teenager to win a main event in Winternationals history. Tyler Reddick of Corning, Calif., was 15 when he won on Feb. 9, 2011 and Bobby Pierce was 17 when he won on Feb. 15, 2014. Neither Pierce nor Reddick have won a Winternationals race since. … Brian Shirley of Chatham, Ill., was slated to start 10th but his night was cut short when he discovered a hole in his radiator just before the feature. He made a lap and parked for the night. … After being caught up in Pearson’s opening-lap trouble, Jackson, who originally started 30th, followed Pearson back to the front to finish sixth. … Wil Herrington of Cochran, Ga., earned the fast time provisional after turning the fourth-fastest lap in Group A (14.663 seconds) but failing to make the feature through he heat or consolation. … There were three different leaders on laps 6-8: O’Neal (lap six), Bronson (lap seven) and Erb (lap eight). … Kyle Bronson, Jonathan Davenport, Dennis Erb Jr., Tyler Erb, Jimmy Owens and Josh Richards were among former Winternationals winners who either caused spun to cause a caution, slowed to draw a yellow of were caught up in someone else’s crash. … Devin Dixon of Apollo Beach, Fla., lost a transfer spot in his heat when he was penalized four positions at the finish for jumping a late restart. … O’Neal’s father Don is the second winningest winner in East Bay Winternationals history with 14 victories. … There were five drivers in the starting lineup whose fathers had won at least one East Bay Winternationals feature: Billy Moyer Jr. (father Billy Moyer won event-high 27 times); O’Neal, Moran (father Donnie is a two-time winner); Tanner English (father Terry won once); and Zack Dohm (father Tim won once).

A gorgeous sunny, 80-degree day prevails for the opening night of the 45th annual Wrisco Winternationals at East Bay Raceway Park. … With the Winternationals moved up one week this year to take the event off the week leading into the Super Bowl in nearby Tampa, tonight’s program marks the first January race at East Bay since 1993 when Floridian Keith Nosbisch won three of the four features. Current Lucas Oil Series technical director Steve Francis captured that year’s other All-Star Circuit of Champions-sanctioned event. … A massive 76-car field is signed in for Monday’s action, marking the first time since 2009 that a Winternationals event has surpassed 70 entries. Several additional competitors are in the pit area but not racing this evening, including Tim Dohm of Cross Lanes, W.Va., and Joel Callahan of Dubuque, Iowa. … A hefty contingent of first-time East Bay starters have descended on East Bay as many noted they want to race at the third-mile oval before it closes for good. The sale of the facility to Mosaic Co., the mining company that owns the mining refuse hill sitting off the track’s backstretch, is scheduled for 2024. … In the wake of Sunday night’s open practice session, many drivers remarked that the East Bay surface proved difficult to handle with its slick spots keeping them up on the wheel. … Big-block modified star and NASCAR Truck regular Stewart Friesen, a Canadian native who now lives in Sprakers, N.Y., decided to make Monday’s program his second career Dirt Late Model start after he “had so much fun” in his division debut Saturday at All-Tech Raceway in Ellisville, Fla. The 37-year-old said on Tuesday he will shift to big-block action for the remainder of the week at Bubba Raceway Park in Ocala, Fla., but he plans to return to his Longhorn Late Model for BRP’s Lucas Oil doubleheader on Feb. 1-2. … One of the East Bay Late Model Winternationals first-timers is 16-year-old Drake Troutman of Hyndman, Pa., who enters the week hot off winning two features en route to capturing last week’s East Bay Modified Winternationals points crown. … Shane Clanton of Zebulon, Ga., said he felt no significant ill effects with his breathing or stamina related to his recent bout with Covid-19 and pneumonia after running Saturday’s Lucas Oil Series feature at All-Tech. He said, however, that his right leg and hip were a bit sore following his first night back in the cockpit; he attributed that to “laying around in bed so long” during his 8-day hospital stay and the steroid shots he received in his hip.