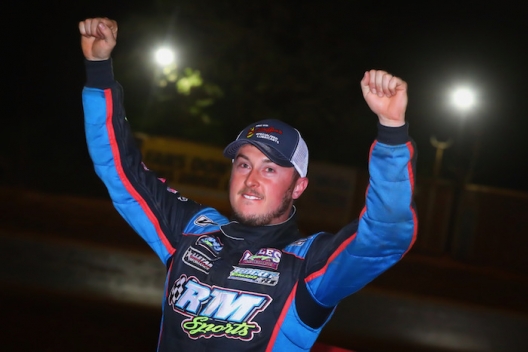 CLARKSVILLE, Tenn. — The Schaeffer's Spring Nationals made its first appearance at Clarksville Speedway on Saturday, and series regulars ran into the buzzsaw that is Tanner English.

The Benton, Ky., driver who has been the track's winningest driver in recent seasons showed why again, leading all 53 laps at the quarter-mile oval for a domination victory that paid a track-high $10,053.

Building comfortable leads and putting as many as five lapped cars between his No. 81E and his pursuers, the polesitting English marched to his first victory on the series but his fourth win overall at Clarksville.

"I've run a lot of laps at this place," English said in victory lane, "so I know just about every condition and where to go when it's a certain way, and everything like that, qualifying and all the way through (the program). I grew up here and it's pretty cool place to come back to and see all these good fans. I know everybody that supports me here and I appreciate it a ton."

English was thankful for supporters that put his Riggs Motorsports car in victory lane.

"I've gotta thank, first of all my crew, my dad and Brock, he works his butt off all week, it's just me and him in the shop," English said. "I've gotta thank them and I've got a lot of friends here and family, I've gotta thank my wife for putting up with everything that I do here in trying to put some bread on the table doing this stuff. It's tough, but it's rewarding when you hit it right.

"I've gotta thank Riggs Motorsports. They've done a lot for me and I couldn't be here without them, for sure."

Frame, who started third, took the second spot from McDowell on the 19th lap before beginning his pursuit of English.

English had "by far the better car," Frame said. "Lapped traffic held him up there the last, I don't know, 10 laps or so. We got to about three car lengths, but lapped traffic is tough, so it may have changed if we had more laps. But congratulations to him for winning it."

McIntosh also had a long battle with McDowell before securing a podium spot on lap 37.

"I felt like I had a real maneuverable car. Me and Dale had a heckuva race. I didn't think I was going to get around Dale," McIntosh said. "I went high, then he went high. Then I went low, and he forced me really low.

"But it was an exciting race. I was glad we were able to move around on the track. I can't thank these guys enough. We're starting to get a little momentum, getting some top-threes. So cool night and looking forward to doing it some more."

Two cautions slowed the action. The initial start was called back and a lap-nine yellow appeared for Johnny Cloer Jr.'s retirement.