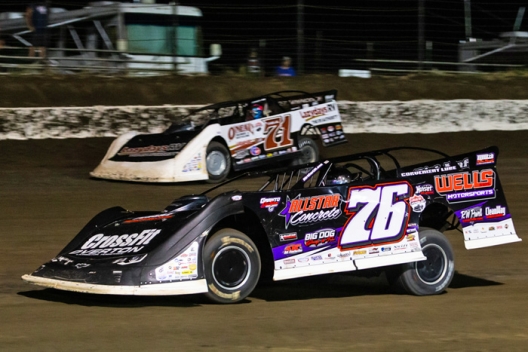 And while the top-ranked 30-year-old driver won the week's opener, Hudson O'Neal of Martinsville, Ind., at least delayed Overton's celebration by briefly slipping ahead mid-race in the 30-lap preliminary event for the Al Belt Custom Homes I-80 Nationals.

O'Neal's high-side pass on a lap-15 restart dropped Overton briefly to second, but he never let O'Neal get too far away in regaining the point on the 19th lap and winning by a 3.118-second margin at the 4/10-mile oval promoted by the Kosiski family.

The race's key moments came at the midway point when, starting on the high-side of a double-file restart, O'Neal squeezed between Overton and the frontstretch wall on the 15th lap to take command. Overton made sure O'Neal's time out front didn't last too long in winning his ninth race in his last 10 starts as well as his second Lucas Oil victory of the season.

"He snuck around me on the outside there and I was just trying to stay calm," Overton said. "Our car's good, it's really balanced. It ain't all the way right yet, I said I've just gotta keep working on it. But all in all, to come out here and set fast time and win the race, it's pretty cool."

O'Neal did everything he could to grab the lead, but he wasn't able to hold on to it while seeking his fourth victory of the season on the national tour.

"I rolled the top really good on that restart. I mean, I was running as hard as I could. I wasn't going to sustain up there for very long," O'Neal said. "You could tell he was going to drive back around me because I was going to get my tires pretty hot. So I tried to roll off (the top) a little bit and I didn't know if clean air maybe would help me, since I wasn't behind him. And then, obviously, it didn't.

"It's just pretty amazing what he's got going on right now. There's not a whole lot of people that can run as good as he is right now, and he's won a lot of big races. It's definitely somebody good to follow. I'm not disappointed at all. I think we were a second-place car, I think we were a little better than third, but just not quite as good as first. So we've gotta a little bit of work to do. We've got a lot of speed to find if we're going to outrun the 76 car."

With results from Tuesday and Wednesday preliminary features setting up the starting field for Thursday's $30,000-to-win I-80 Nationals — then the two-day $53,000-to-win Imperial Tile Silver Dollar Nationals coming up Friday and Saturday — Overton is licking his chops for more I-80 Speedway action.

"It's such a cool place with a helluva payout, you know, so just glad to be able to be here and support the Kosiskis and everybody at the racetrack and Lucas," he said. "It's kind of unreal for me to just keep going to these races and keep picking 'em off. I don't know what I did to deserve all this, but I don't want it to stop."

Tuesday's race was slowed by two cautions, the first for a slowing Tyler Bruening on the 15th lap (Bruening had gotten into the turn-three fence while running fourth on the sixth lap.) A lap-26 yellow appeared when Brandon Sheppard was stopped against the wall exiting turn four.

With passing points determining the 18 heat-race transfers, the red-hot Brandon Overton’s two-position gain from the sixth starting spot was good enough to earn him the pole position for the 30-lap feature. … Nebraska standout Tad Pospisil won the second heat, but his team found terminal engine trouble after the race and he scratched from the feature. … Starting spots for the other heat winners: Shane Clanton (ninth), Jonathan Davenport (10th) and Bill Leighton Jr. (18th). … Spencer Hughes, who was the fastest qualifier in the first group of time trials, had to run a B-main after he got into the wall between turns three and four early in his heat race. He won the consolation in his PCC Motorsports car to move into the headliner. ... Chris Ferguson fell one spot short of transferring in the second B-main after mechanical trouble during time trials prevented him from logging a qualifying lap and a faulty starter wire forced him out of his heat.