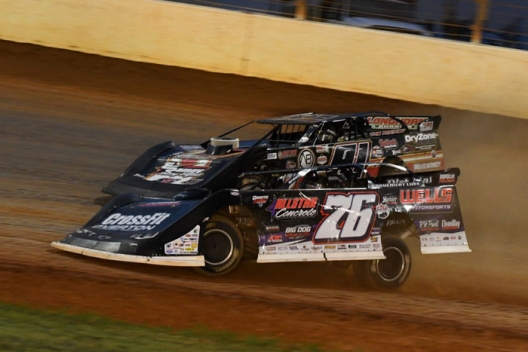 Kevin Ritchie
Brandon Overton (76) goes under Derrick Ramey (91).
What won the race: Making his first July start after a spectacular June, Brandon Overton of Evans, Ga., led all but the first two laps Sunday at the Carolina Sizzler for a $20,000 Super Late Model victory at the Dirt Track at Charlotte. He took the checkers 2.798 seconds over seventh-starting Tim McCreadie.
Quotable: “Man, I was just glad to get to race. It seems like rain has been wreaking havoc with everything the past few weeks, but it held off long enough for us to get Sunday night in and we got the win," Overton said. "A lot of guys were worried about tires for the feature, but I did my best to take care of my equipment, and everything worked out.”
Key notes: Overton, who earned more than $300,000 in June including a sweep of Eldora's double Dreams, captured his eighth feature in his last nine feature starts. .... Derrick Ramey led the first two laps and slipped back to finish fifth. ... Three cautions slowed the action, all for single-car incidents. ... The Dirt Track at Charlotte hosted the unsanctioned Carolina Sizzler paying $20,000 to the winner of Sunday’s 60-lap feature. … Sunday’s program, which includes a $10,000-to-win 604 Crate Late Model race, a $5,000-to-win Limited Late Model race and a $2,500-to-win 602 Crate Late Model race, is the second day of the two-day event at the track across the street from Charlotte Motor Speedway (Super Late Models didn't compete Saturday).
On the move: Dale McDowell of Chickamauga, Ga., started 15th and finished fourth.
Winner's sponsors: Overton’s Wells Motorsports Longhorn Chassis is powered by a Clements Race Engine and sponsored by CrossFit Overton, Allstar Concrete, E-Z-Go, Big Dog Stump & Tree, R.W. Powell Construction, Convenient Lube, Allstar Performance and Topnotch Kustom Koncepts.
Current weather: Overcast, 84°F
Car count: 28
Fast qualifier: Brandon Overton
Time: 15.702 seconds
Polesitter: Brandon Overton
Editor's note: Results and race details are unofficial.
From staff and event reports

CONCORD, N.C. — Despite a three-week layoff since his spectacular performances in a lucrative June, Brandon Overton hasn't cooled off one bit.

The 30-year-old Evans, Ga., driver led all but two laps of Sunday's Carolina Sizzler and cruised to a $20,000 payday on the 4/10-mile Dirt Track at Charlotte. Overton's victories was his eighth in his last nine starts overall and gives him a solid start in July in purse money following his unbelievable June, which included more than $300,000 in earnings, most of it from the double Dream sweep at Ohio's Eldora Speedway.

Once the polesitting Overton took the lead from fellow front-row starter Derrick Ramey on the third lap, he was barely challenged, repelling his pursuers on three restarts and surviving a brief bout of lapped traffic with 10 laps remaining.

Overton took the checkers 2.789 seconds ahead of runner-up Tim McCreadie of Watertown, N.Y., who started seventh and moved into the second spot on the 16th lap. Ninth-starting Michael Chilton of Salvisa, Ky., was third followed by 17th-starter Dale McDowell of Chickamauga, Ga., and Mooresville, N.C.'s Ramey in the richest main event of the weekend as Charlotte hosted a variety of Late Model-style divisions.

Ramey edged ahead at the start of the 60-lap main event before the low-running Overton edged ahead on the third lap and began pulling away, building a three-second lead on the field shortly after McCreadie took the second spot.

After a lap-24 caution, Overton went back to work and held a two-second lead at halfway with McCreadie, Ramey, Chilton and McDowell giving chase. Kyle Strickler of Mooresville, N.C., ran third the first 11 laps and was still in the top five until getting shuffled back to seventh after the first restart.

McCreadie and Chilton — who took the third spot on lap 35 — lined up side-by-side for the double-file restart behind Overton with 23 laps to go, but Overton pulled away once again and had a comfortable lead on McCreadie entering the race's late stages.

Overton's only minor issue of the evening came with 11 laps remaining as he tried to put a lap on Kenny Collins, briefly costing the leader momentum and allowing McCreadie to briefly cut Overton's margin to just under one second. But once Overton cleared Collins and other lapped cars, he stretched his lead again before the final caution with six laps remaining. He wasn't challenged the rest of the way in completing the 60-lap victory.

The feature was slowed by three cautions, first when Tyler Millwood of Kingston, Ga., slipped out of the groove with a flat right-front tire on the 24th lap. He retired 10 laps later.

Trent Ivey of Union, S.C. got into the wall on the 37th lap for the second yellow flag (he pulled pitside) and the final caution appeared on lap 54 for Derek Rogers.

Notes: Overton's leisurely July — in part because at least three events he planned to compete in were rained out — ends this week with the Georgia driver planning to head to I-80 Speedway in Greenwood, Neb., for five straight nights of Lucas Oil Late Model Dirt Series action with more than $500,000 in purse money on the line, including the week-capping $53,000-to-win Imperial Tile Silver Dollar Nationals. ... At Charlotte, a No. D1 car of late Hall of Famer Jim Dunn paced the field before the main event. ... Kyle Strickler won Saturday's mini-modified feature,