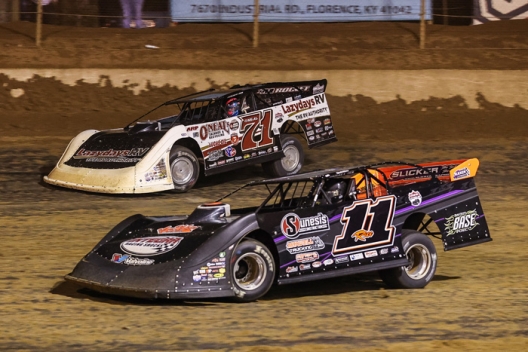 O'Neal swatted away Rice's stabs at the lead a dozen or more times, but the 22-year-old Verona, Ky., finally made the winning move down the backstretch with four laps remaining and closed out his first Lucas Oil Late Model Dirt Series victory and richest career payday with $15,000.

"I can't believe it. I didn't think I was ever going to get by him," Rice said in victory lane after stopping on the backstretch to climb from his car and celebrate with fans. "I didn't know if I was clearing him or not, but I wanted this one so bad."

Capturing a memorial race he so dearly coveted, Rice thrilled fans with the back-and-forth battle with drama topping even his near-miss on the series last year when he lost a photo finish to Earl Pearson Jr.

Rice earned accolades from some of the sport's best drivers, a victory lane hug from car owner Rick Jones and might never make it out of the pit area after inviting fans to join his celebration.

"If you haven't met me," Rice told the raucous crowd, "stop by the trailer tonight."

After grabbing the lead on lap 57, Rice finished out his 1.212-second victory over O'Neal, the 22-year-old Martinsville, Ind., driver who led 37 laps. Jonathan Davenport of Blairsville, Ga., eyeing a Bluegrass State sweep after Friday's victory at Junction City's Ponderosa Speedway, led the first 18  laps but settled for third with 18th-starting Tyler Erb of New Waverly, Texas, in fourth. Tim McCreadie of Watertown, N.Y., the series points leader and last year's Sunoco Race Fuels North-South 100 winner at Florence, improved 10 positions to round out the top five.

"What an awesome race," O'Neal said. "I wish it would've ended a little bit different, but you know, congratulations to Josh. It's a huge home-crowd win for him. I can relate. Whenever I won the Jackson (100 in Brownstown, Ind. in 2019), it was unbelievable, and I'm happy he was able to do it tonight

"We had a good race car. We were good all night. We just came up one spot short," O'Neal added. "I knew as long as I could keep him sliding me down here (in turns one and two) and not in three and four that I would be OK, because there just wasn't enough (traction) on exit for him to catch anything, and I could cross him over and get a run back down. There was a couple of times I thought I was going to give it to him. We just caught some lapped traffic at some bad times. That's just part of racing, nobody's fault."

"Josh did a great job. He runs here a lot and he knows how to run this treacherous cushion to a T," Davenport said. "He done a helluva job. For an old guy, I just couldn't hang with him."

Erb, who overcame a poor qualifying effort but found himself chasing Rice in his third trip to Florence this season, has been praising the rising star.

"Everybody thought I was kidding when I said how good Josh Rice has been here," Erb said. "I'm glad he won in front of all this crowd and these good cars. He's the fastest car here and has been for a long time. It's really cool to see him win here at his home track."

Davenport commanded the first 18 laps before O'Neal took the point while Race took the second spot from Davenport on lap 28 and began stalking the leader. Rice nipped O'Neal at the line to lead lap 34, but O'Neal went back out front and stayed in control despite Rice's frequent challenges in turns one and two.

Lap after lap, Rice would dive underneath O'Neal in turn one, but drift up in turn two and lose momentum while O'Neal's momentum would carry him back into the lead down the backstretch. Finally Rice got the upper hand on lap 57 and it was his No. 11 zipping down the backstretch and into the lead for good. He let it all hang out after being as patient as he could early in the race.

"That was the most impatient, patient race I've ever seen," car owner Rick Jones said in joining his driver at the microphone. "He was impatient, but he waited it out and got it at the end. Great job."

Rice threw everything he had at O'Neal and finally got over the hump.

"I gotta thank Huddy for running me clean, there. I know a couple of them sliders were probably pretty close. I was just four-wheel sliding when I drove in there a couple of times," said Rice, whose father Jerry is a former Florence champion. "He got really tight (in turn four), and like, 'Now's my shot.' I drove it in and hit the fence and I was trying so far to pedal it off (turn) two and just get a run down the backstretch. I was so much better down in (turns) three and four than everybody. We cleared him, man, I couldn't believe it. I was so thankful we were finally clear of him. There's no way I'd ever have got by him once we got to lapped traffic."

The feature was slowed by three cautions, the most serious on the 11th lap when Jimmy Owens, Ricky Thornton Jr. and Mike Marlar ended up in a pileup against the turn-two wall. Scott James was also involved but no one was injured.

Other cautions flew when Darrell Lanigan got into the wall (lap six) and for frontstretch debris (lap 32).

Rice was plagued by an engine issue all night, but the powerplant held together.

"We had a header leaking all night," he said. "We tried everything to get it to run right. I knew how good I was early, and I was like, 'There's no way I'm pulling off.' I don't think we done any damage to the motor. Another hat's off to (engine builder) Jay Dickens, man. I think that's why I was so much better down here in (turns) three and four. I just had so much motor."

Rice figured he and his supporters will celebrate and "see the sun come up," possibly while still sitting in the pit area.

"Everybody was joking that if we win this deal, we're going to shop to party. I was like, no, I don't think we're leaving the racetrack."

Notes: Rice scored his third Florence victory of the season. He won a pair of unsanctioned $5,000 features on March 27 and April 17. ... Ten drivers completed 60 laps. ... Hometown driver Darrell Lanigan, abandoning his chase on the World of Outlaws Morton Buildings Late Model Series circuit after splitting with Viper Motorsports, piloted the No. K3 car owned by Mississippi's Randy Thompson. He won a consolation race but retired after drawing the feature's first caution. ... Zack Dohm had issues in his heat race and scratched for the night. .... Reigning track champion Trevor Landrum was gunning for the final transfer spot in a consolation race when he got into the backstretch wall.