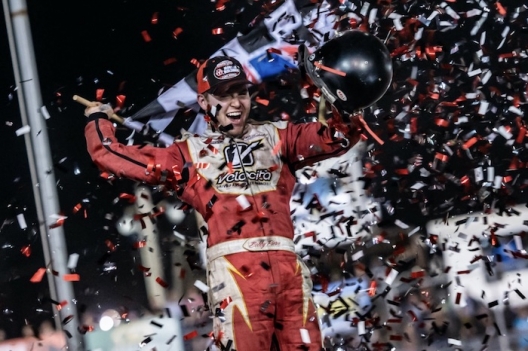 BOONE, Iowa (May 1) — Bobby Pierce tried for years before finally breaking through for his first World of Outlaws Morton Buildings Late Model Series victory in Farmer City (Ill.) Raceway’s $20,000 Illini 100 on April 3. His second series victory came much quicker and it was even bigger.

Earning his second big-money World of Outlaws triumph in less than a month, Pierce of Oakwood, Ill., advanced from his fifth starting spot and took the lead from polesitter Billy Moyer of Batesville, Ark., on lap 30 of Saturday’s Hawkeye 100 and led the rest of the way for a $30,000 payday at Boone Speedway.

The 24-year-old Pierce took the checkers 1.037 seconds ahead of runner-up Shannon Babb of Moweaqua, Ill., in the 100-lap race that marked the finale of the WoO tour’s debut weekend at Boone. Brandon Sheppard of New Berlin, Ill., finished third to give the Land of Lincoln a sweep of the race’s top three spots, while Moyer slid back to fourth at the finish with Ricky Weiss of Headingley, Manitoba, rounding out the top five.

“This is awesome,” Pierce said after climbing from his Pierce Race Car in victory lane. “Thirty grand and another World of Outlaws win. (WoO announcer) Rick (Eshelman) said once I get the first one, they’re gonna keep coming. I’m glad it did.”

Pierce’s second WoO victory may have came much quicker than his first one, but it was by no means easy. Starting from the middle of the second row in the WoO tour’s first ever three-wide start, Pierce settled into fourth early before dropping back to fifth on a lap-14 restart. He was still fifth on lap 20 when he noticed Boone’s wide track surface that was multi-grooved early in the race was beginning to develop a dominant lower groove.

Knowing it was time to make his move, Pierce began a furious charge to the front and by lap 27, was up to second with his sights set on Moyer. Diving low under Moyer in turns one and two on lap 30, Pierce easily drove by Moyer down the back straightaway to take the lead.

“I felt it take a little bit of rubber off two early on,” said Pierce in explaining his motivation to make his strong charge to the front. “I was in like fourth or fifth. Right then, I knew if we were gonna get it, we had to get it right then.”

Once he got to the lead, Pierce began to worry that his dominant run to the front might come back to haunt him in the form of excessive tire wear late in the race.

“I was hoping I didn’t charge too hard there in the beginning,” Pierce said. “When I took the lead, it was crazy. I thought everyone was just like letting me pass them. It was that crazy. I was like man, these guys must know it’s gonna rubber up. They’re letting me get out ahead and they’re gonna let me blow a tire and they’re gonna sneak on by. Luckily, it held on. That’s the gamble you take.

“It was definitely a big thing going through my mind. There was a few lapped cars that were really sliding, and I figured that if they blew a tire I was probably five laps behind them. They never blew a tire that I know of, so I figured I was good.”

With tire wear never becoming a significant issue, Pierce’s only obstacle during a green-flag run that lasted from lap 51 until lap 90 was was navigating slower cars and not allowing Babb and Sheppard to close. He did that with ease thanks to a little help from the WoO tour’s large television screen that he could see from the driver’s seat.

“I knew it was my race to lose,” said Pierce, who easily pulled away from the field over three restarts in the race’s final 10 laps. “I love the World of Outlaws races now because I can see the big jumbotron and see the guy behind me and see if I’m all right. I love that.

“That’s what kept me calm. I was really worried that Shannon or anybody was gonna make the middle work, but it got pretty crumby there and I knew it probably wasn’t there. Like I said, it was my race to lose.”

Even though he had nothing for Pierce, Babb was happy with his runner-up effort. It wasn’t a victory, but his $15,000 check for finishing second ranks among his biggest paydays in recent seasons.

“I’ll take that any day. That’s a big boost in our account,” said Babb, who earned $3,000 for winning one of Friday’s two Hawkeye 100 preliminary night features at Boone. “Bobby was definitely awesome. His car would go everywhere and he drove right by us. He had the best car by far. We were happy with our stuff. Just got to keep tuning on it a little bit. I was too tight last night and made it a little loose tonight. It’s just part of learning.”

Sheppard, the three-time WoO champion and current series points leader, still remains winless on the 2021 season, but he pointed to his two podium finishes in the weekend’s two points-paying features as proof that his Rocket Chassis house car team is improving.

“We’re getting our consistency back and that what it’s going to take to start getting some wins,” said Sheppard, whose only victory on the season came in a split field WoO preliminary feature at Cherokee Speedway’s Rock Gault Memorial in March. “I’m really happy with everything we’re doing with the race car. The team’s been working hard to try and get me back up front. They haven’t given up on me yet, so we’re going to keep plugging away here and hopefully we can get a win here in the next couple of weeks.”

The race was rather uneventful once Pierce got to the lead, but it saw plenty of action in the first 30 laps with front-row starters Moyer and Kyle Strickler of Mooresville, N.C., swapping the lead four times officially and at least another four times unofficially before Pierce’s lap-30 pass of Moyer became the fifth and final official lead change.

While Moyer held on to finish fourth, Strickler wasn’t so lucky. He was knocked out of contention when contact with Weiss sent his car spinning on lap 22. He later had a flat tire that caused a lap-37 caution and was involved in the race’s final caution on lap 96. He pulled in after that and ended up 19th in the final rundown.

Notes: The race was slowed by nine cautions; none were for serious accidents. … The two-night event marked the WoO tour’s first-ever visit to Boone, a track popular for hosting the IMCA Super Nationals each September and not known for hosting Super Late Model racing. … Eighteen of the race’s 23 starters were running at the finish with 16 on the lead lap. Pierce earned his third overall victory of the season. Along with his two extra-money WoO wins, he scored a $7,000 DIRTcar-sanctioned victory during February’s DIRTcar Nationals at Volusia Speedway Park in Barberville, Fla.

(Based on Friday's prelim features; used to align Saturday heats)