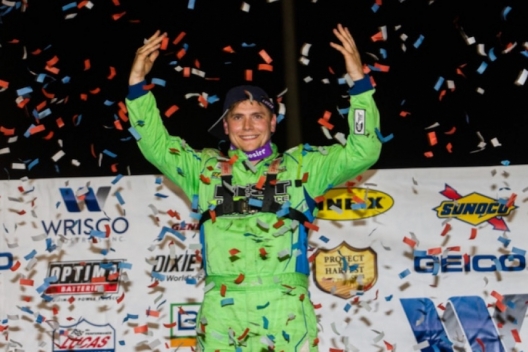 And Erb wondered if Tuesday was going to have another tough conclusion when a yellow flag dropped just a few seconds before he was poised to take the checkered flag barely ahead of Brandon Overton.

But the ninth-starting Erb kept his composure, led Overton back to green in a one-lap shootout to the finish and held on for a $5,000 victory, his third at East Bay and 10th career on the national tour.

"We've definitely have had to work for everything we've gotten this week," Erb said in victory lane.

Overton, the Evans, Ga., driver who led laps 10-27, fell two-tenths short of Erb at the finish while early leader Brian Shirley of Chatham, Ill., settled for third after leading the first nine laps. Josh Richards of Shinnston, W.Va., improved 19 positions in finishing fourth while Kyle Bronson of Brandon, Fla., rounded out the top five in the 30-lapper.

Pole-starting Tanner English of Benton, Ky., was sixth and Brandon Sheppard of New Berlin, Ill., ran among the top four all race long until a right-rear flat tire on lap 29 triggered the sixth and final caution.

Shirley controlled the early, caution-plagued laps before Overton took control on the 10th lap while Erb, who started inside the fifth row, broke into the top five just before halfway. Erb got up to third on lap 18 and began tracking Sheppard and Overton, slipping under Sheppard in turn one to take the second spot on lap 24, then using the inside again on lap 28 to grab the lead.

He was on the verge of wrapping up the victory when the last-second yellow fell for the slowing Sheppard.

"I thought that would've made a great TV (finish), that's the only reason I could see to throw a caution," Erb said, adding that when he saw "the yellow and I was not happy."

But he was glad to finish off the second of six Lucas Oil races at East Bay on a week with more than 70 competitors packing the pits.

"It feels really good," Erb said. "Last night was kind of heartbreaker and in practice I crashed this thing right at the end. It means a lot. My guys work really hard and my boss spends a lot of money for me to come out here and do this ... when I get to stand up here, it's just a representation of all them."

Erb didn't get to the front quickly, but Sheppard showed him there was an opportunity to gain ground.

"The fog definitely made it a little greasier on the bottom from the drop of the green. I was watching Shepp and he could hang down there and hang down there, and I just thought, man, he's going to get to the lead if I don't stay down here with him," Erb said. "There was a big hole getting into (turn) one and I was just able to capitalize once there.

"Brandon was really good and we got into lapped traffic, and I was just able to make couple of good moves there."

Overton, who discovered postrace his right-rear tire was deflating late in the race, harkened back to a race at East Bay last May when he came out on top in a battle with Erb.

"I guess that's what I get for passing him on the last lap last time we was over here," Overton said after congratulating Erb. "He done a good job ...

"It's just hard to make the right call every night because the track changes so much ... We'll just keep getting on the podium and we'll get us one before the end of the week."

Shirley, the fastest of 74 qualifiers, is still searching for his first East Bay victory.

"It's kind of hard, I don't have a ton of experience (of running) up front here at East Bay. It's not one of my better tracks," said Shirley, who retired early from Monday's feature because of a hole in his car's radiator. "I set up (the suspension) a little bit more (for the track) to get a little blacker where I could steer a little better. I felt like I was little loose in that race and I couldn't hug the corner like I needed to."

The feature was slowed by six cautions, including a multicar incident on the initial start when Shane Clanton got into the backstretch wall, collecting Gregg Satterlee and an onrushing Tim McCreadie, whose car bounded into the air. Satterlee, McCreadie and Dennis Erb Jr. were among those retiring with damage.

Other than the lap-29 caution for Sheppard's flat tire, the rest of the slowdowns came in the first half of the race. Mike Marlar slowed with right-front suspension problems on the third lap and another caution appeared on the fourth lap with Kyle Strickler, Frank Heckenast Jr., reigning series champ Jimmy Owens and Earl Pearson Jr. part of a tangle exiting turn two.

A ninth-lap yellow appeared on the ninth lap when eighth-running Clanton's smoking car slowed and Pearson spun on the 14th lap and retired.

Shirley controlled the early, caution-plagued stretch of the race before the fifth-starting Overton took command on the 10th lap.

Weather conditions for Tuesday’s Round 2 of the Wrisco Industries Winternationals are slightly different from Monday’s opener: the afternoon high temperature reached into the upper 70s but the skies only began to turn sunny during the afternoon after clouds broke up. … Tuesday’s field numbers 74, down two entries from Monday. … Former Winternationals winner Tim Dohm of Cross Lanes, W.Va., is keeping his new Longhorn car in the trailer for a second consecutive night to focus his energy — and his finances — on his son Zack’s effort. Zack, who recovered from a frustrating qualifying time to make his second career feature start at East Bay (he’s only run a handful of races at the third-mile oval and never a full week), finished 11th in the 30-lapper after nearly breaking into the top five at one point. … Devin Moran of Dresden, Ohio, finished fourth Monday, but when he was bidding for the lead he thought the stars were aligning for him to score a special victory. Monday was the birthday of his family’s longtime sponsor Linda Shultz, who died on Christmas Eve at the age of 70. Shultz and her late husband, Eddie, owned Eddie’s Sunoco, the Mansfield, Ohio, service station that has long appeared on the cars driven by Moran and his Hall of Fame father Donnie. … Mason Zeigler of Chalk Hill, Pa., who won last year’s Friday-night feature at East Bay, climbed from 15th to seventh in Monday’s feature before losing grip with his car and deciding to retire on lap 11 to save his equipment. “When I moved up out of the brown (inside lane) I felt like I was gonna spin out,” he said. … Ashton Winger of Hampton, Ga., is driving Floridian Kenny Monahan’s second car for the entire week at East Bay. It’s a one-off deal for Winger, who plans to run a Florida-based Crate Late Model next week at East Bay before returning to his family-owned machine for the Feb. 8-13 DIRTcar Nationals at Volusia Speedway Park in Barberville, Fla. … Tony Jackson Jr. of Lebanon, Mo., started 30th in Monday’s feature and was forced to make a pit stop with right-rear body damage his car sustained in an opening-lap incident, but he recovered with a steady run to finish sixth. Retired driver Randy Korte, who is assisting Jackson’s Speedweeks effort, suggested that perhaps Jackson should have been even more aggressive late in the race. “Last night would’ve been the night for him to knock the wall down (running high) because he couldn’t have beat (the right-rear corner) up any worse,” Korte cracked, drawing a snicker from Jackson as he sat in the car before hot laps. … Bobby Pierce of Oakwood, Ill., is expected to join the East Bay field on Wednesday. He noted on social media that his departure from his shop was delayed because he still had more work to do.