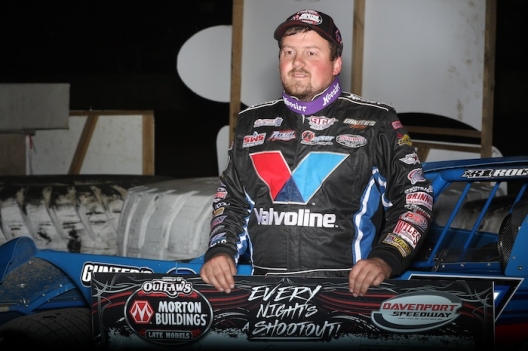 DAVENPORT, Iowa (May 30) — There was no doubt about the outcome of Saturday night’s 40-lap World of Outlaws Morton Buildings Late Model Series feature at Davenport Speedway. Brandon Sheppard made sure of it.

Twenty-four hours after nipping Ricky Thornton Jr. by inches in the weekend opener on Davenport’s inner quarter-mile oval, Sheppard dominated the finale contested on the facility’s half-mile layout. The 27-year-old star from New Berlin, Ill., drove his Rocket Chassis house car by Frank Heckenast Jr. of Frankfort, Ill., for the lead on lap five and never looked back en route to the race’s $10,000 top prize.

Sheppard beat the MB Customs machine piloted by Jimmy Mars of Menomonie, Wis., to the finish line by 2.086 seconds — roughly a half-straightaway — to complete a sweep of the Inside-Out doubleheader that was run in front of a closed grandstand due to Covid-19 pandemic restrictions. It was B-Shepp’s series-leading third victory of the coronavirus-interrupted 2020 season and the 58th of his career in WoO competition.

Chris Madden of Gray Court, S.C., finished third in his Scott Bloomquist Racing mount after ceding second place to Mars on lap 31. Cade Dillard of Robeline, La., earned hard-charger honors with his advance from the 19th starting spot to a fourth-place finish in his MB Customs car — a chassis built by Mars — and the polesitting Heckenast placed fifth in his XR1 Rocket after leading laps 1-4.

For Sheppard, the back-to-back triumphs not only gave him a $16,000 weekend but snapped him out of what his team owner Mark Richards called a “coronavirus slump.” After ending February’s Georgia-Florida Speedweeks with eight overall victories already his belt — five in the house car, three with his family-owned No. b5 — he had gone winless in his first six starts coming out of a two-month layoff for the coronavirus crisis.

“It feels good to be back in victory lane for sure,” said Sheppard, who became the first Dirt Late Model driver to reach a double-figure win total with his 10th triumph of 2020. “We got our confidence up last night — it was a tough-fought battle (to the finish with Thornton), but we did it last night. Then tonight, everybody’s confidence was higher coming into the night and we qualified good again and won a heat race and that was key to getting the win again.”

Starting fourth in the A-main, Sheppard quickly bolted to the front using the outside lane. He reached second on lap three with a pass of Oakwood, Ill.’s Bobby Pierce and glided around Heckenast for the lead on lap five.

Pierce, who grabbed second from Heckenast on lap six, generally kept Sheppard in his sights for more than half the distance despite bending the right-rear corner of his car’s bodywork on lap seven when he bounced off the wall between turns one and two. He lost second to Madden, however, on a lap-27 restart and proceeded to fade over the remaining circuits to finish sixth.

Mars, 48, became Sheppard’s prime pursuer after completing a march from the 11th starting spot to second with a lap-31 pass of Madden. He actually cut 1 second off of Sheppard’s commanding edge over the final nine laps but never drew close enough to offer a challenge.

Sheppard, of course, was just too fast to be beaten this night. The defending WoO champion felt he even had more speed in his No. 1 if he had switched from running the outside line to Mars’s inside groove.

“It was actually rubbering up in the bottom down there (in three and four), so I’d say a few more laps and I would’ve been needing to get in the bottom.”

Calling his car “really good,” Sheppard said he left Davenport with plenty of momentum as looks forward to the June 4-6 Dirt Late Model Stream Invitational at Eldora Speedway in Rossburg, Ohio, and its $50,000 winner’s check.

“Just getting out front and getting clean air and maintaining the lead there, that all comes with qualifying good and winning the heat race,” Sheppard said. “In order for this consistency to stay good we’ve got to keep doing that.”

Mars was pleased with what ranked as his strongest outing of the season.

“We just kind of messed up qualifying so we kind of dug a hole there. That was really on me. I haven’t qualified here for awhile lately, so just getting back in the rhythm of all that.”

The biggest problem for Mars came following a lap-10 restart when he came together with Scott Bloomquist of Mooresburg, Tenn., in turn three as they battled for seventh, causing damage to Bloomquist’s car that triggered a multi-car tangle. Bloomquist was forced to retire from the race and finished 21st.

“Me and Scott got together down the backstraightaway,” Mars said. “He was on the bottom and I was on the top, and he swung it out at the last minute and we got together. I got to apologize to him, but there was really nothing I could do. I lifted as much as I could. I’m glad it wasn’t worse than what it was there.”

Madden salvaged the night for Scott Bloomquist Racing with his third-place finish, his best WoO run since he placed third Jan. 4 at Vado (N.M.) Speedway Park.

“We’re still missing just a little bit, but we’ve come a long way the last few weeks here,” said Madden, who started seventh. “We’ve definitely been struggling a little bit, but we’ve been working on it pretty hard and we definitely found a few things here. Just hopefully we can continue the momentum along and continue to get these podium finishes and then we’ll get our wins.

“But right now we’re competitive, so we’ll take this and drive with it.”

Caution flags flew for Boom Briggs (blown right-rear tire on lap 10, slowed on lap 19); the multi-car stack up in turn three on lap 10 that began with the Mars-Bloomquist scrape; seventh-place Ashton Winger stopping on the homestretch on lap 22; and debris on lap 27.

Notes: Sheppard extended his WoO points lead to 74 markers over Ricky Weiss, who saw his streak of four straight WoO podium finishes come to an end with an eighth-place run after he started 13th. … Brian Birkhofer ran as high as fifth in his Jason Rauen-owned car before fading steadily following a lap-27 restart and finishing 19th, the next-to-last driver on the lead lap. … Friday runner-up Ricky Thornton Jr. never contended on the half-mile in his SSI Motorsports machine; he advanced from 17th to 10th by lap 10, but after being involved in the turn-three tangle on the 10th circuit he pitted and only managed to climb back to a 12th-place finish. … The WoO is currently scheduled to return to action June 12-13 with a doubleheader at Cochran (Ga.) Motor Speedway.