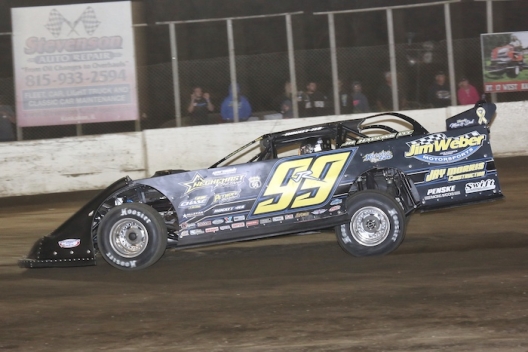 KANKAKEE, Ill. (Aug. 18) — Making the most of a visit to his home track, Frank Heckenast Jr. of Frankfort, Ill., led every lap of Tuesday’s DIRTcar Summer Nationals feature at Kankakee County Speedway to earn $5,000 for his second victory on the tour’s 2020 campaign.

With only one early caution slowing the 40-lap feature, the pole-starting Heckenast was never seriously challenged in cruising to a dominating victory at the third-mile track located about a half-hour from his shop. He crossed the finish line 6.857 seconds ahead of Jason Feger of Bloomington, Ill., in claiming his fourth career Summer Nationals victory and his second series victory at Kankakee.

“I want to win anytime I’m racing, but it’s special to win here and to do it like that. I love when I can just lay it all out there and show that we can win and we can do this stuff,” said Heckenast, whose first Summer Nationals win at Kankakee came in 2015. “It’s our home track and we have so many people here supporting us. I’m so happy to be able to get it done with everybody here.”

Feger settled for the runner-up spot after topping a back-and-forth battle with Ryan Gustin of Marshalltown, Iowa, who finished third. Rusty Schlenk of McClure, Ohio, advanced from the eighth starting spot to finish fourth, while 10th-starting Travis Stemler of Iona, Mich., rounded out the top five. Series points leader Brian Shirley of Chatham, Ill., started alongside Heckenast on the front row, but he was never a serious factor in slipping back to sixth at the finish.

Heckenast was strong all night at Kankakee in sweeping the program. After claiming fast time honors and earning the pole for his heat race, Heckenast briefly fell back to fourth in the 10-lap prelim before using an impressive high-side charge to rally back to the front and win.

His main event victory was never in doubt. Pulling ahead of Shirley on the start of the race, Heckenast quickly opened up a comfortable lead and was never challenged. His only concern was damage done to the right-rear corner of his race car when he got too high in turns three and four on lap 16 and scraped the wall. Luckily, the damage didn’t cost him much time.

Entering Kankakee’s event 148 points behind Shirley in the tour’s championship chase, Heckenast is too far behind to have a serious chance of mounting a late comeback in the tour’s finale week. But with the series heading north to compete its final four nights in Michigan, Heckenast is looking forward to finishing his campaign on a positive note.

“I was always looking forward to this last week since the schedule came out,” Heckenast said. “I love them tracks up in Michigan, so to come here, then head up that way, it’s the perfect final week for me. We’ve got a ton of fans up there, so I’m looking forward to getting up there and hopefully putting on some good shows for them.”

Heckenast’s dominating performance was aided by a back-and-forth battle behind him. Feger and Gustin swapped the spot multiple times as they battled through traffic before Feger took the spot for good with two laps remaining. But by then it was far too late to reel in Heckenast.

“I felt like we were really good, especially on the bottom there. I felt like we maybe had something for Frankie, but could get off the middle and top better than I could.” Feger said. “I probably needed to be more aggressive with the lapped cars. I felt like they were all on the bottom and that’s definitely where I was the best.

After an inconsistent season, Gustin was happy for an improved performance at Kankakee, but he was disappointed to give up the second spot late in the race.

“We'll take it. It's the best run we've had in a while," Gustin said. "I think we definitely had a second-place. I think if we could’ve got to Frankie and maybe cleared him lapped traffic we might have been able to hold him off. But that’s the way it goes. When you get it lapped traffic, sometimes it helps ya and sometimes it hurts ya.”

Tuesday's race was the tour's final stop in Illinois before heading to Michigan to wrap up the 2020 series with four straight races in the Wolverine State.

Polesitter Frank Heckenast Jr. slipped back to fourth early in the first heat race, but he used an impressive high-side rally to charge back to the front and passed Mike Spatola with three laps remaining. ... Brian Shirley pulled away in heat two while third-starting Cody Bauer rallied to second after dropping to fifth on the opening lap. Bob Gardner ran second early before he slowed with heavy smoke trailing from his car. ... Jason Feger held off Kevin Weaver's furious late charge to win heat three in a side-by-side finish.

Drivers and crews were welcomed to the start of the final week by beautiful weather with afternoon temperatures barely reaching the mid-70s. … Three Michigan drivers didn’t want to wait for the Summer Nationals to come to them on Wednesday. Travis Stemler, Bryant Dickinson and Cody Bauer all made the trip over to Kankakee to kick off their stints on Tuesday. By competing in all five of the week’s events, they’ll have a shot at the $2,000 final weekly points chase that’s sponsored by Racing Electronics this week. … Drake Troutman of Hyndman, Pa., is making his Summer Nationals debut at Kankakee and plans to follow the tour for the full week. The 15-year-old Super Late Model rookie competes regularly at Bedford (Pa.) Speedway and Roaring Knob Motorsports Complex in Markleysburg, Pa. ... Donny Walden of Towanda, Ill., is making his first appearance at Kankakee since 2011. … Jason Feger has a new hauler at Kankakee; it’s light blue and was purchased from West Virginia racer Mike Benedum.

The DIRTcar Summer Nationals kicks off the final week of its 2020 campaign on Tuesday with a visit to Kankakee County Speedway. The $5,000-to-win event is the 20th round of this year’s tour and is the last series stop in Illinois before the tour heads north to finish of the series with four straight races in Michigan.

Looking for his third consecutive series title and the fourth of his career, Brian Shirley of Chatham, Ill., has a commanding lead in the series points standings heading into the event. He’s followed by Frank Heckenast Jr. and Jason Feger in the tour’s points race.

The series makes its 12th visit to Kankakee’s third-mile oval. The track has hosted the tour every season since 2009. Bobby Pierce of Oakwood, Ill., and Billy Moyer of Batesville, Ark., each have three series victories at Kankakee. Shannon Babb of Moweaqua, Ill., has two series victories, while Shirley, Heckenast and Mike Spatola of Manhattan, Ill., have each won once at the track.