Information provided by: Series and track reports (last updated May 30, 11:33 am)
B-Shepp nips Thornton by inches at Davenport 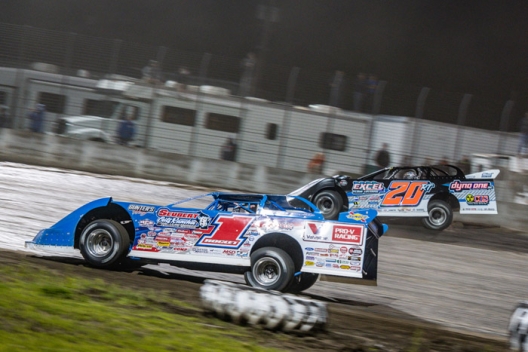 But both drivers were unsure if they should celebrate a triumph or mourn a runner-up performance in Friday night’s 30-lap World of Outlaws Morton Buildings Late Model Series feature at the quarter-mile Davenport Speedway. That’s how close they were when they crossed the finish line side-by-side.

Sheppard, 27, of New Berlin, Ill., was eventually declared the $6,000 winner several minutes after the checkered flag, his margin of victory over the Chandler, Ariz., native a minuscule 0.007 of a second — literally inches.

“I didn’t know,” Sheppard said of the race’s dramatic conclusion. “I looked over and he was right next to me there and I knew it was gonna be close.”

“It was a photo finish off (turn) four,” Thornton added. “I honestly didn’t know if I won or he won.”

Even the A-main’s third-place finisher, Ricky Weiss of Headingley, Manitoba, was left wondering about the outcome.

“I didn’t know who won it,” said Weiss, who was just under 2 seconds behind the pacesetters at the finish. “I just knew it was close.”

Indeed, it was excruciatingly close, one of the tightest finishes in WoO history. It was the type of finish that would have brought the crowd in Davenport’s covered grandstand to its feet — if fans were in them, of course. Spectators weren’t allowed for the event due to coronavirus pandemic restrictions.

The race developed into an epic showdown between Sheppard, the defending WoO champion whose only win with the Rocket Chassis house car team in the first 11 events of the 2020 WoO season came on Feb. 12 at Volusia Speedway Park in Barberville, Fla., after apparent victor Dennis Erb Jr. of Carpentersville, Ill., was disqualified for not reporting directly to post-race tech, and the 29-year-old Thornton, who was back behind the wheel of Todd and Vicki Burns’s Longhorn Race Car six days after earning $20,000 for his first-ever WoO victory at Jackson (Minn.) Motorplex.

Sheppard, who started fourth, reached the front of the pack first, using an extreme inside line off turn four to grab the lead from polesitter and race-long pacesetter Bobby Pierce of Oakwood, Ill., on lap 12. But the ninth-starting Thornton soon moved into contention, passing Pierce for third on lap 15.

Thornton was still third on lap 18 when the race’s lone caution flag flew for a turn-four spin by Brent Larson of Lake Elmo, Minn. The open-wheel modified ace shot to the top of the racetrack on the restart and burst by second-place Ryan Unzicker of El Paso, Ill., and Sheppard to assume command as lap 19 was scored.

Sheppard managed to nose back ahead using the inside lane to lead lap 22, but Thornton regained control the next circuit. Thornton put a few short car lengths between himself and Sheppard until he lost momentum in lapped traffic and watched Sheppard slide to his inside to take the lead as the white flag was displayed, setting off a wild final circuit.

With Thornton digging hard on the outside through turns one and two, the leaders made contact off the corner and Thornton pulled ahead. But when Thornton dived to the bottom of turns three and four, Sheppard seized the opportunity to run the outside. The lane swap allowed Sheppard to blast off the fourth corner and, be the slimmest of margins, best Thornton for his 57th career WoO triumph.

Some observers thought Thornton had won the race, but the transponder scoring system showed that Sheppard crossed the electronic loop at the start/finish line near the end of the homestretch just a split second before Thornton. With WoO rules stipulating that the electronic scoring results are final provided that both drivers in the photo finish have their transponders mounted in the same spot — as officials found to be true with Sheppard and Thornton upon post-race inspection — Sheppard was declared the winner.

Sheppard expressed a sense of relief after pulling off the victory.

“I should’ve went to the top there in (turns) one and two after that (lap-18) restart, after I had the lead,” Sheppard said. “But I really didn’t know where to go so I just stuck with what was working for me (running the inside) and (Thornton) was able to carry some speed and get around me.

“I seen him go to the bottom one lap so I shot it in on the top in three and four, and I noticed it had a little bit of a streak of rubber. Then he passed me back and we got down into one (on the final lap) and he bobbled a little bit and we kind of touched, and then we went back down into three and four again and he went to the bottom again and I was able to catch that (high-side strip) and give me just enough of a lunge to get by him.”

The triumph snapped Sheppard out of what, for him, could be considered a slump. He was winless in six starts since returning from racing’s coronavirus shutdown, including five appearances with the Rocket house car team.

The key to returning Sheppard to his winning ways? Putting together a complete night.

“We qualified a front row of a heat race, on the pole of a heat race, and that’s what we need to do,” Sheppard said. “That’s where you can win a heat race from, especially here … the track was starting really good off the bottom so you really needed to start on the pole. So we did that, but it all goes back to qualifying. You’ve got to be able to qualify good to start the heat where you want to start.

“We’ve definitely been struggling a little bit, but our feature stuff’s been good still. We’ve had a really good race car in the features and I knew if we could get qualifying better we could get up front and we did that.”

Thornton, meanwhile, couldn’t hang his head after his near-miss. His reunion with the Burnses’ Morgantown, Ind.-based SSI Motorsports team continued to produce superb results on a big stage.

“Me and Brandon had a really good race,” said Thornton, who now lives in Iowa. “There on that restart I think we were two-wide for probably five or six laps. I was able to kind of get by him, and then I got to traffic and I just screwed up. I thought I was gonna be able to slide Boom (Briggs) there and it just didn’t quite work out.

“The last lap we were able to get back by him … I don’t know. It looks like he won it obviously, but we’ll definitely take a second.

“I had a blast,” he added. “We qualified good, had a good heat race, a good main. It definitely makes it a lot more fun whenever you’re in good equipment. We took kind of a gamble there in the feature and it paid off for us.”

Weiss settled for a strong but quiet third-place finish in his Bloomquist Race Car. He started 11th and was up to fourth when the caution flag flew on lap 18 but wasn’t able to threaten the leaders after he reached third place.

“We stepped on it a little bit early (in time trials), and the track got better as cars went out there and they were able to move up in qualifying,” said Weiss, who registered his fourth straight WoO podium finish dating back to the last race before racing went on hiatus in mid-March due to the coronavirus crisis. “We got really good in the heat and we were able to tweak from there.

“We were able to get up to third there and keep up with them on the bottom when they were in the rubber up top, which means we’re really good. I’m pumped to say that about our team. We’ve been making big strides.

“Tonight, this racetrack was pretty awesome,” he continued. “I don’t know how it would’ve done for another 30 laps or something. It was starting to latch down up top a little bit at the end, but I moved up there and we were just as good as these two … but I was able to get front-row seats for that show.”

Notes: Sheppard recorded his ninth overall victory of 2020. His eight wins before the coronavirus shutdown included five Speedweeks scores with the Rocket house car team (three Lucas Oil, one DIRTcar, one WoO) and three in Arizona driving his family-owned No. b5. … Bobby Pierce faded precipitously after leading laps 1-11, finishing eighth. … Justin Kay of Wheatland, Iowa, won the evening’s 25-lap IMCA Late Model feature before registering a career-best WoO finish of sixth. He earned hard-charger honors moving forward from the 15th starting spot. … After escaping injury when he rolled his IMCA Late Model in turn two early in the division’s feature, Joel Callahan jumped into his Super Late Model for the WoO A-main and was the race’s first retiree. … Open-wheel modified standout Mike McKinney of Plainfield, Ill., made his Super Late Model debut driving for Doug Curless but failed to qualify, finishing eighth in the first B-main. ... WoO emergency provisionals were used by Kody Evans, Brent Larson and Matt Cosner. … The WoO tour returns to Davenport on Saturday for a spectator-free, $10,000-to-win event that will be run on the facility’s half-mile oval.