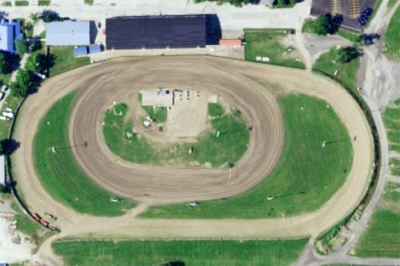 The quarter- and half-mile layouts via Apple Maps.

Some World of Outlaws Morton Buildings Late Model Series drivers look forward to the big, high-speed tracks on the national circuit. Others prefer the shorter, tighter bullrings with lower speeds but tighter action.

Both kinds of dirt racers will be happy — at least for one night — during the tour’s May 29-30 trip to Davenport (Iowa) Speedway at the Mississippi Valley Fairgrounds, where drivers will battle on the facility’s quarter-mile layout on the opening night before gearing up to tackle the sprawling half-mile configuration.

The sister ovals share the grandstands, a similar dirt surface and part of the frontstretch … but not much else.

Spectators won’t get to witness the spectacle firsthand — Covid-19 restrictions don’t allow the gathering of a large crowd — but tour fans can watch all the action at DIRTVision.com.

“I would choose the big half-mile every time, no doubt,” Weiss said. “I just seem to run better on the big tracks and we usually damage our cars less, too. This is the first time I’ve ever been to a speedway with a big track and small track, so it’ll be interesting to see how it all pans out. We were OK on the big track last year, but obviously coming into this year we’ve got some higher expectations.”

Cade Dillard of Robeline, La., posted a third-place finish on Davenport’s half-mile in last season’s WoO action — behind winner Jimmy Owens of Newport, Tenn., and runner-up Brandon Sheppard of New Berlin, Ill. — but he’s looking forward to a crack at the shorter track.

“I grew up on all of these little bullrings around Louisiana, so I would definitely rather be on the small quarter-mile all weekend,” Dillard said. “It just fits my kind of driving style so much more than the half-mile.”

One of the few drivers with experience on both tracks, Chris Simpson of Oxford, Iowa, leans toward the smaller track. He ran third with the World of Outlaws on Davenport's half-mile in 2018 and captured a Northern LateModel Racing Association feature on Davenport's quarter-mile in 2016.

“I would take the quarter-mile all day, because it won’t hurt near as bad if you wreck,” Simpson said. “I like the idea of running both tracks though. They’re both unique in their own ways, so I think both nights should be a good show.”

For other drivers, it doesn’t matter at all. Chase Junghans of Manhattan, Kan., is just glad to be racing again after the coronavirus scrapped much of the spring schedule.

“I’m game for either one of them,” said Junghans, who has fifth- and eighth-place finishes on Davenport’s half-mile in series competition. “It will be two totally different animals for sure. I think the fans and viewers at home will really get to see the difference from Friday to Saturday. For me, they both pay at the end of the day. I’m just glad we got somewhere to race!”

WoO’s leading Rookie of the Year candidate Ashton Winger of Hampton, Ga., prefers the shorter track but realizes he needs more experience on the larger layouts.

“I would probably rather run on the quarter-mile both days,” Winger said. “I don’t have a ton of experience on the big tracks yet, but I know the only way to get better is to keep on going, so hopefully both days produce good racing and good results for us. I don’t know of too many places that have two tracks on the property, so that’ll be interesting.”

On the other hand, Winger’s rookie competitor Matt Cosner of Ridgeley, W.Va., has more experience on big tracks.

“I would choose the half-mile for sure,” Cosner said. “I like bigger tracks because that’s mostly what we run out our way at home. Everything around us is a half-mile to 5/8-mile, so I’ve grown comfortable around those sizes of tracks. I’ve never heard of such a thing, so I’m anxious to see what two tracks in one looks like. I was joking around and said we should have a joker lap on Saturday like Rallycross to make it interesting.”

Notes: IMCA Late Models, which routinely compete on the quarter-mile track, will compete on the undercard in Friday’s program. … Chad Simpson of Mount Vernon, Iowa, won 2018’s WoO event at Davenport, but ended up on his lid in last season’s race. … Mike McKinney of Plainfield, Ill., is expected to make his WoO debut for East Moline, Ill., car owner Doug Curless. … Thirteen drivers have competed in all 11 series races so far. … Non-series regular Jimmy Owens is the only driver with more than two victories; he has three, all during Speedweeks at Volusia Speedway Park in Barberville, Fla. … Series regulars still looking for top-10 finishes are Boom Briggs, Kody Evans and Brent Larson.