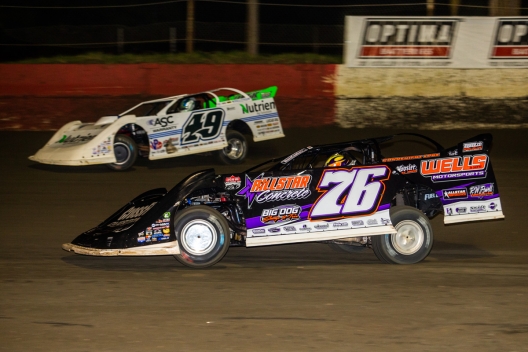 GIBSONTON, Fla. — Early leader Brandon Overton watched Jonathan Davenport blow past him on the outside after a lap-12 restart Tuesday at East Bay Raceway Park. His solution? Go to the high side himself.

“You can’t give up, you know?” Overton said in victory lane after thanking supporters for watching Lucas Oil’s live streaming video back home. “Like I said, it proves it over and over again, if you keep digging, it’ll come.”

Overton, who retired with a vibration in his car while running second the previous night and dropped out leading in last week’s finale at Golden isles Speedway, wasn’t denied in winning his fifth career Lucas Oil Series victory.

He had a comfortable lead of more than three seconds late in the race, but a flock of lapped cars loomed ahead with Davenport ready for a last-ditch shot at the leader.

“That’s the problem about leading here. J.D. rolled me on the restart. You just don’t know where to go. It just all worked out for me,” Overton said. “Right there at the end, (lapped cars) were kind of where I needed to be, and I just tried to patient and just get as close to ’em as I could without hitting him — and just hold on.

“Hat’s off to my crew. We tore this thing up pretty good yesterday and they got it all fixed and nothing was wrong with it. We qualified good with it again today.”

Overton's mechanical woes and other assorted Lucas Oil misfortunes have proved a test for his Wells Motorsports team.

“I’ve been putting ’em through the ringer. We got tore up in Brunswick and they never complained,” he said. “Big Dave’s here with me, my car owner tonight. Man, I’ve been wanting to win. He came down here earlier in the year and we run a couple of podiums, but to get him a Lucas Oil win, him and Eric and everybody back at the shop, Longhorn by Wells, I couldn’t do it without ’em and I appreciate everything they do for me.”

Davenport, winner of Monday’s 40-lapper, was in position to repeat when he jumped to the high-side on the race’s first restart and blew past Overton down the backstretch. But second-guessing his groove choice put him back to second.

“We got lucky there and a caution came out and we was third. We got the lead there, and for some reason — I don’t know — I went back to the bottom,” Davenport said. “I should’ve stayed in the top, but Brandon could run with me, I could see him for a lap and half in the bottom, so I didn’t know if it was better. So I went down there one time and tried it and he blowed right around me. He’s been having a lot of bad luck. He told me today all these other wins didn’t matter until he got a Lucas win, so I guess I’ll let him have that one.”

The runner-up finish gave him his first back-to-back podium finishes on the Lucas Oil tour in 2020 for the three-time and reigning champion.

“It’s just a huge morale booster for all of us,” he said. “We went a week and a half (during February's Speedweeks) and really, really struggled and didn’t really know why. So we came down here and just went back to our notes. We had this car here before, and it was pretty good. So we’re just missing a little bit of balance somewhere else. This car is really particular, so we’re just going to have to stay right on it and cross our T’s and dot our I’s with it, but I think we’re going to have a good year.”

Owens started out outside the front row and slipped outside the top three for a single lap, but he could never get close enough to take a serious stab at the lead.

“We had a super good race car all night long, and just on that first takeoff, the outside was a little bit crumby and stuff, and we got to running the bottom quite a bit there,” he said. “We ran them green-flag laps and then (for a restart) I chose the bottom, and I’m looking at the high side, and I was like, ’Man, it’s time to be up there. I’ve made a bad lane choice’ You know, that knocked us back to third there. But all in all, I feel like if I’d make that (correct) lane choice on that (restart), you’d see a different outcome to the race. But I’m happy to come home with a third-place finish.

“I’m pretty pumped about it. The car’s just been (great), we’ve been making strides and strides getting better and better and better, and tonight under these conditions, I feel like that’s probably the best car we’ve had here. So I look forward to making a few more adjustments for tomorrow.”

The feature was slowed by four cautions, all for single-car stoppages. The first yellow appeared on the 12th lap for seventh-running Tyler Bruening’s shredded right-rear tire and another a lap later when Stormy Scott slowed on lap 13 with a flat left-rear tire. Tyler Erb stopped with a flat right-rear on lap 22 and ninth-running Brian Shirley stopped in turn three on lap 26.

The Lucas Oil Reopening Tour wraps up Wednesday with another $7,000-to-win event at East Bay with the driver whose earned the most points over the six events receiving a $5,000 bonus from Riggs Drilling Solutions.

Notes: Overton’s fourth victory of the month makes him May’s winningest Super Late Model driver. … His last Lucas Oil victory came at the Hillbilly 100 on Sept. 2, 2018, at Tyler County Speedway in Middlebourne, W.Va.. … Mason Zeigler of Chalk Hill, Pa., was running second in the third heat when he slowed to draw a caution with a broken rear end; he was eligible for a provisional starting spot but couldn’t make repairs before the feature. … Hudson O’Neal took a provisional starting spot after having ignition woes in his consolation race. … February East Bay winner Devin Moran of Dresden, Ohio, lost a front-row starting spot in the second heat when he was tagged for twice jumping the start. ... Ken Monahan, the first of 31 qualifiers, lost fire when he pulled on the track for qualifying and scratched for the night. ... Larry Grube, the only driver entered who didn't compete Monday, scratched before time trials because of suspension problems in hot laps.