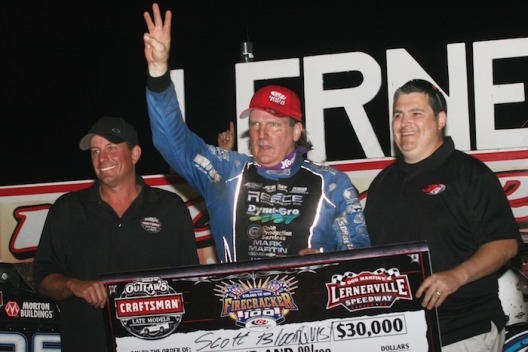 SARVER, Pa. (June 25) — Edging ahead of race leader Dale McDowell of Chickamauga, Ga., on lap 54 of 100, eighth-starting Scott Bloomquist of Mooresburg, Tenn., led the remaining circuits, stretching his lead in lapped traffic for his third career Firecracker 100 victory at Lernerville Speedway. He earned a $30,000 payday.

Rolling off from the second-starting spot, Tim McCreadie of Watertown, N.Y., jumped to the lead at the drop of the green flag, entering lapped traffic by lap 15. Successfully navigating lapped cars, third-starting Dale McDowell of Chickamauga, Ga., shot past McCreadie down the backstretch, assuming the point on lap 17.

McDowell stretched his lead in the early running, with Bloomquist reeling in the race leader near the halfway mark. The pair crossed the line side-by-side on lap 49, with Bloomquist pulling ahead for good five laps later. The Hall of Famer distanced himself from second-running Josh Richards of Shinnston, W.Va., late in the race to capture his 30th career World of Outlaws Craftsman Late Model Series victory.

“The car was really good,” Bloomquist said after the race. “The engine was smooth. Everything was smooth once the race started. I didn’t have to get too ridiculous, but I know I probably covered every inch of that racetrack.

“I didn’t want to take the lead too early. But you also don’t want to put yourself in a position on the double-file restarts to end up back another spot. Once I got in second, I chose the inside and it worked out fine for us. I was running a different line than Dale (McDowell). I’d followed him enough, I felt real confident I could get the lead. I found what I considered to be the best line once I took the lead.”

Blomquist’s victory comes just days after DIRTcar Racing announced him as one of five drivers receiving a suspension and other penalties because of failed tire tests from Eldora Speedway’s June 9-11 Dream XXII.

“I was in Texas on Monday, and I didn’t event have a clue any of this stuff was going on,” Bloomquist said. “I found out about it when everyone else did. That was pretty disappointing. That’s the last thing I expected. When I heard, I was like, ‘What next?’

Advancing from the fifth-starting spot, Richards finished runner-up, with McDowell settling for third. Earl Pearson Jr. of Jacksonville, Fla., charged from the 14th starting position to run fourth, with Jonathan Davenport of Blairsville, Ga., who had to relinquish his scheduled sixth starting and take the green from the 28th position because he failed to make it to the track for driver introductions, rallying from the tail of the field for salvage a top-five finish.

“We had a great week,” Richards said in victory lane. “We just lacked just a little bit. Scott could turn ever-so-slightly better. That was the difference in winning. He did a great job. We were off a little bit, but I’m still glad that we were that close at the end. We still had a good week.”

After leading early, McDowell slipped to finish third, but overall he said he was pleased with his Firecracker weekend.

“We’ve struggled all weekend on forward drive,” McDowell said after the race. “Shane, my brother, has been working his tail off switching things and working on the car, so we at least went in a positive direction tonight. We were better when there was a little bit of spotty traction, and once that was gone, I think Scott was definitely a little better. We’ll keep working on it and see if we can do better next week."

Notes: Bloomquist previously won the event in 2007 and 2012. ... The first yellow flag flew on lap 23 when Brian Shirley spun in turn two; Mason Zeigler and Alex Ferree retired under the caution.  … Jason Covert drew a caution on lap 38 when he slowed in turn two. … A yellow flag waved on lap 52 when Shirley slowed in turns three and four. … Darrell Lanigan of Union, Ky., failed to start the Firecracker 100 for the first time after experiencing a rough heat race in which the former race winner ended up spun around twice; Chub Frank and Rick Eckert are now the only two drivers to start all 10 of them. ... Eckert was the top home-state performer, finishing seventh.

Former Firecracker 100 winner Josh Richards of Shinnston, W.Va., enters Saturday’s main event with the best overall finish from preliminary action. He’ll start on the pole of the evening’s first heat race. … After experiencing problems in Saturday afternoon’s program and scratching from racing action, Darrell Lanigan of Union, Ky.,  has switched engines in his Clint Bowyer Racing machine. ... Sustaining an ankle injury in a Friday rollover incident, Austin Hubbard of Seaford, Del., is on hand for the Firecracker 100 finale as a spectator. He’ll have to undergo surgery this week. … Two Lernerville track provisionals will be locked in to Saturday’s 100-lapper. Should they not qualify through the heat race or consolation, provisionals will go to Mike Pegher Jr. of Wexford, Pa., and Russ King of Bristolville, Pa. Pegher was the winner of Lernerville’s mid-season championship, while King is the track’s current points leader.

Saturday evening’s program will include four heat races, lined up based on a driver's best finish overall finish in preliminary action. Consolations will line up the remainder of the feature field, along with two series provisionals and two track provisionals.