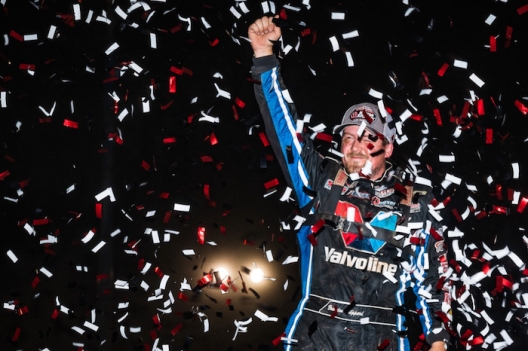 HAMMETT, Pa. (Aug. 22) — Brandon Sheppard hasn’t been his usual dominant self in the Rocket Chassis house car this season. He’s yet to even win back-to-back races on the World of Outlaws Morton Buildings Late Model Series.

But in waltzing to a convincing victory in the national tour’s 40-lap feature Sunday night at Eriez Speedway, the 28-year-old star from New Berlin, Ill., looked as close to his vintage form as he has all year.

Sheppard failed to grab the lead from the pole position at the initial green flag, but, after soaring past Dennis Erb Jr. of Carpentersville, Ill., to assume command on lap five, he was effectively in a league of his own. He brushed off the competition following repeated restarts and was never seriously threatened en route to flashing under the checkered flag 1.897 seconds ahead of Waterford, Pa.’s Dave Hess Jr., who made a spectacular drive forward from the 25th starting spot after only getting into the A-main by a promoter’s option following a hard heat-race crash.

What’s more, Sheppard’s sixth WoO triumph of 2021 gave him a personal milestone: his 75th career win on the series. He moved out of a tie for second with Darrell Lanigan on the tour’s all-time win list and now trails Josh Richards — the son of his car owner Mark Richards — by only three victories.

“It’s really awesome,” Sheppard said of his 75th WoO win, which was worth $10,000. “I’m definitely proud of my guys, proud of my team. This team that Mark put together here has just been a dream come true for me over the past five years, so it means a lot to me to get to drive this thing.”

Chub Frank of Bear Lake, Pa., the 59-year-old former WoO regular who cut his racing teeth on the Stateline-Eriez circuit, finished third in his familiar self-owned No. 1* after running second for laps 14-35. Erb settled for a fourth-place finish after leading laps 1-4 and Frank’s cousin and shop-mate, Boom Briggs of Bear Lake, Pa., advanced from the 13th starting spot to complete the top five with a last-lap pass of Gray Court, S.C.’s Chris Madden.

Sheppard sounded like a satisfied driver in victory lane after rebounding from a subpar qualifying effort to finish second in his heat race, which allowed him to snatch the number one pill in the feature’s draw for starting spots.

“We definitely had to work for it in that heat race,” said Sheppard, ninth quickest in the 26-car qualifying session. “We didn’t qualify as we needed to, kind of trying some stuff on the car there early in the night. We got it turned back around for the heat race and were lucky enough to get in the redraw, and that was key tonight — getting to start up front with these guys.”

While Sheppard controlled the action once he overtook Erb for the lead, he was frustrated by the seemingly endless series of caution flags that dulled his momentum. Seven of the race’s eight cautions came after he became the leader.

“I really hated to see them restarts,” said Sheppard, the three-time and defending WoO champion who ended the tour’s four-race Northeast swing — which he began with a victory on Thursday at Orange County Fair Speedway in Middletown, N.Y. — holding a commanding 158-point edge over Madden. “I couldn’t take off quite as good as I needed to. It felt like it took me a few laps to get my right-rear tire warmed up, but once we got rolling I felt really good. It was just, Chub or the other guy (early contender Wyatt Scott of Garland, Pa.) was showing me a nose there every restart, so it was stressing me out a little bit.”

Sheppard ultimately handled the restarts with aplomb, but he intimated he was glad that the race didn’t see a final slowdown after the charging Hess reached second place with a lap-36 pass of Frank.

“Man, Hess had some bad luck in the heat race there … he must be a bad dude,” Sheppard said, praising Hess’s stirring rally. “He came right up through there, so that’s pretty cool.”

Hess, Eriez’s Super Late Model points leader and a winner of a WoO event on June 17 at Stateline Speedway in Busti, N.Y., saw his hopes of defeating the big-name invaders seemingly evaporate when he slammed the turn-four wall during his heat race. His stout Black Diamond Race Car was towed off the track with significant damage, but it wasn’t bad enough to keep him from starting the feature after track officials decided to add him to the field.

“To be honest, I thought we were done for the night,” Hess said. “We hit a ton. The frame on the back of this thing is over quite a bit, but all the suspension was still under it and I knew we’d be all right.”

Hess, 36, didn’t expect to end up with a podium finish, but he knew his battle-scarred machine could carry him to a respectable result once he cracked the top 10 on a lap-20 restart. Eight laps later he surged from sixth to fourth, on lap 31 he overtook Erb for third and on the 36th circuit he went underneath Frank for second.

“I just tried to race a smart race and stay out of trouble for awhile, and then we got that bottom rolling at the end,” Hess said. “I think one more restart we could’ve made a real good race out of it, but it was a good time.

“This car has already had its licks the last couple seasons, and God, it just keeps getting better it seems like, as crazy as that sounds. It’s been an awesome car, awesome season. Anytime you can run to the podium with the type of cars we had here today, it’s awesome.”

Frank, a victor 16 times in WoO action by winless on the tour since Aug. 22, 2009 — 12 years to the day — at Atomic Speedway (then K-C Raceway) in Alma, Ohio, noted afterward that he just didn’t have enough rubber left to race with Sheppard or Hess.

“I really needed to not burn my left-rear tire up,” Frank said. “But (on) the restarts I had to race so hard, and we had to run the top like that, to stay up with Brandon, and I just burnt the left-rear tire up a little more than he did.

“And Dave (Hess Jr.), I know his car’s been good all year, so he just sneaks around there on the bottom and kept his left-rear (tire). Actually, I think that was a smart move because he saved his left-rear and still had good drive off the corner. Probably I held him up a little bit or he might have had a chance to get to Brandon.”

The first of the race’s eight caution flags flew on lap two when a scramble left Steve Kania with a flat tire. Jason Genco spun in turn two on the 13th lap before lap 20 became a major problem as four cautions were displayed without a circuit being completed: for Logan Zarin slowing, Dutch Davies spinning in turn four, fifth-place Matt Lux riding the homestretch wall (he was towed off) and Max Blair twirling in turn three. Wyatt Scott, who was about to grab second on a lap-20 restart before a caution negated the move, pulled up lame with a flat right-rear tire on lap 26 while running fourth and one circuit later Davies spun again in turn one for the feature’s final slowdown.