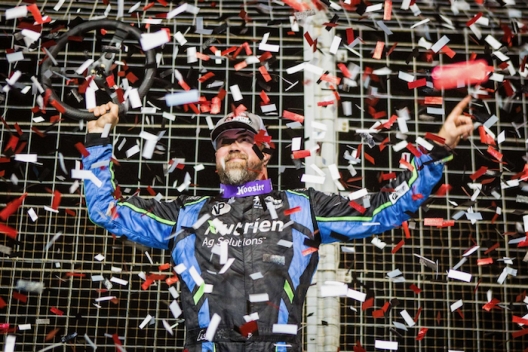 The fourth-starting Davenport earned $12,000 for his ninth career series victory during the tour’s season-ending weekend while Sheppard, falling short in a bid to tie Josh Richards as the WoO's all-time winningest driver, finished 4.285 seconds back at the checkers.

"It's just great, especially to come here and end the year off in front of this huge crowd, this great facility," Davenport said after capturing his fourth career World Finals feature and first since the 2015 finale. "They had the racetrack awesome. I mean, we could run all over it. That was definitely good."

Dennis Erb Jr. of Carpentersville, Ill., who started seventh but slipped back to 10th from laps 10-13, rallied back to grab third from unrelated 13th-starting Tyler Erb of New Waverly, Texas, on the final lap. Pole-starting Ricky Weiss of Headingley, Manitoba, who led the first 11 laps before Sheppard blew by on the high side, rounded out the top five.

Davenport grabbed the second spot from Weiss on lap-19 restart and began closing on the leading Sheppard past the halfway point. As the frontrunners entered slower traffic, Davenport shot past with an inside move in turn three and wasn't headed the rest of the way.

"I thought I was a little bit better than Brandon (Sheppard) when he was behind (Weiss), but I knew he had a little bit of dirty air and I could run just a lane lower than he could," Davenport said. "I didn't think, once he got into the lead, I thought, 'Oh s---, he's going to be in clean air.' But we got to lapped cars and it slowed him up a little bit and it gave me just enough where I could get a run on him."

Relying on the cushion much of the race, the track surface "didn't really latch up, but it cleaned up in a few spots. I was just really maneuverable, My guys — Jason (Durham), Vinny (Guliani), Matt (Langston) and Clint (Campbell) — they gave me another excellent Longhorn car again tonight."

"Once the track got cleaned up a little bit more there at the end, we definitely got tight (handling)," Sheppard said. "We had a good car for most of the race there. We hung on for as long as we could. The guys have been working really hard on this thing and gave me a great car all night long. We definitely got something to work with tomorrow — hopefully we can get us one spot better. Congrats to J.D., he did a great job there."

Sheppard's struggle as that he "couldn't really get through lapped traffic. That was what was killing me. As soon as I'd get to them, I couldn't do nothing with 'em."

Erb, who scored his sixth podium finish of his WoO season, went from 10th to fifth between laps 13-20 and picked up two more spots in the second half of the feature.

"We had a real good car tonight," he said. "We just fell back a little bit on the start there, but as the race went on we kept getting better and better, so all in all, to get up here and get the top-three is a good night for us."

Four cautions slowed the action, all for single-car slowdowns between laps 13-19. The first appeared on the 13th lap when Brandon Overton (flat tire) and John Blankenship slowed, triggering pit stops for several drivers. The second fell on lap 16 when Garrett Smith slowed with right-rear body damage and two laps later seventh-running Tim McCreadie slowed. On lap 19, Austin Kirkpatrick fell from the top five when he was forced pitside with a flat left-rear tire.

The World Finals continues Saturday with another three-division program that includes a $12,000-to-win WoO Late Model feature with action slated to start earlier than scheduled (1 p.m.) in hopes of beating potential wet weather later in the evening.

After Thursday’s World Finals qualifying program was rained out, Friday has brought overcast but dry conditions and cool temperatures (afternoon high in the 50s with temps expected to drop into the low 40s by the end of the night). … Forty-eight Late Models are signed in alongside 46 WoO Sprint Cars and 40 Super DIRTcar Series big-block modifieds. … The 48-car Late Model field is by far the lowest car count in the history of the World Finals. Excluding last year’s “Last Call replacement event due to Covid-19 restrictions that drew 55 and 50 cars, the average turnout for the World Finals since its birth in 2007 is 75.23 cars with a high of 86 (2015) and a low of 66 (2011). … Brandon Sheppard of New Berlin, Ill., enters Friday’s competition having already clinched his third straight and fourth overall $100,000 WoO points championship with the Rocket Chassis house car team. … Brandon Overton of Evans, Ga., is pulling double-duty, adding his first-ever attempt at 410 sprint car action to his usual Wells Motorsports Late Model ride. He was offered the seat of WoO veteran Jason Sides’s second car while hanging out on Thursday night and accepted the opportunity; he was the slowest qualifier in his time-trial group, however, as he attempted to adjust to the faster, lighter machine. … WoO sprint star Donny Schatz of Fargo, N.D., is also running both the sprint car and Late Model divisions with his family-owned full-fender Rocket car in the pits. … Tim McCreadie of Watertown, N.Y., is taking a different approach with his weekend double-duty, entering both his Paylor Motorsports Longhorn mount and a New Jersey-based big-block modified. … Debuting new Longhorn cars are Brian Shirley of Chatham, Ill., (his first start in a Bob Cullen-owned machine since Eldora Speedway’s World 100s in September) and Ashton Winger of Hampton, Ga. (G.R. Smith/J.C. Clary Broadnax-Shaker Motorsports No. 89). … WoO regular Boom Briggs of Bear Lake, Pa., has a brand-new XR1 Rocket/Clements engine combination entered in Friday’s action. … Chris Ferguson of Mount Holly, has renumbered his Team Zero car from No. 22 to an 01 for the weekend as part of a throwback scheme honoring his late sponsor Phil Nye. … Nick Hoffman of Mooresville, N.C., who won last week’s Drydene World Short Track Championship UMP modified feature at Charlotte, is sporting sponsorship from NOS Energy Drink on his Scott Bloomquist Racing Late Model. … Tyler Erb of New Waverly, Texas, is making his first WoO start since last year’s USA Nationals at Cedar Lake Speedway in New Richmond, Wis., where an altercation with Bobby Pierce resulted in him receiving a one-year suspension from WoO- and DIRTcar-sanctioned events. … Spec-engine Late Model standout Jesse Glenz of Fall Creek, Wis., picked a big stage to make his Super Late Model debut. The 28-year-old Glenz is filling in for driver Mike Mullen of Seymour, Wis. in a Ricky Lemmon-owned Rocket with a Clemmons engine in making his first trip to Charlotte. ... The lone driver who has started all 26 World Finals Late Model features since 2007 — Shane Clanton of Zebulon, Ga. — is not in this year’s field.