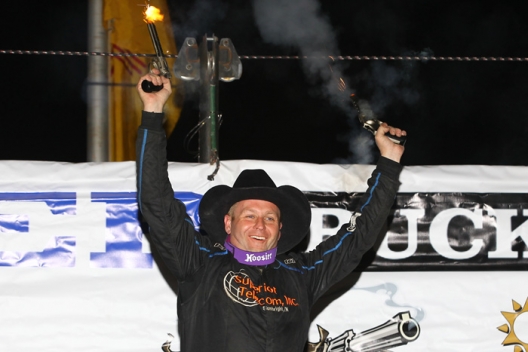 “I really didn’t have anything for him,” Marlar said of the 25-year-old Super Late Model upstart from Winona, Minn. “Man, that kid done a heck of a job.”

But not quite good enough to defeat Marlar, who took advantage of a lap-40 restart to end Timm’s race-long run in the lead and march on to victory in the finale of the 16th annual Wild West Shootout presented by O’Reilly Auto Parts.

Marlar, 43, of Winfield, Tenn., paced the final 10 circuits to take the checkered flag 2.260 seconds ahead of Jacksonville, Fla.’s Earl Pearson Jr., who slipped past Timm on lap 43 but never threatened to steal the $25,000 top prize. Timm settled for third place after starting from the pole position and leading laps 1-40 while Bobby Pierce of Oakwood, Ill., placed fourth and Stormy Scott of Las Cruces, N.M., registered a miniseries-best fifth-place finish.

The lone top-five finisher not driving a Longhorn Chassis was Pierce, who drove a machine built by his father Bob.

The triumph was Marlar’s second straight to end the Wild West Shootout — putting him alongside Brandon Sheppard of New Berlin, Ill., as a repeat winner — and earned him the miniseries points title. The championship added $3,000 to his hefty take.

Marlar conceded, though, that he needed some breaks to down Timm, an open-wheel modified standout who is breaking into the Dirt Late Model ranks. He started from the outside pole but couldn’t stick with Timm early in the race as he fell back to third by lap five, and he couldn’t find the speed to draw close enough to challenge the fleet pacesetter after he regained the runner-up spot from Ricky Weiss on lap 18.

While Marlar said his Ronnie Delk-owned car “came on for some reason” as the race’s long stretch of uninterrupted racing rolled on, catching Timm still proved to be a difficult proposition.

“I thought I had a setup before the race, and when they wetted it (reworked the surface for the feature) I was like, ‘We gotta go change a bunch of stuff,’” Marlar said. “So we changed a lot of stuff on the car and freed back up. Early I was a little too free, but as the night went on it got better and better.

“I’d love to say we had a plan there, but it just worked out.”

The key moments for Marlar proved to be the feature’s only two caution flags, which came back-to-back on laps 40 and 41.

The first, on lap 40 when the lapped Kent Rosevear bounced off Marlar’s car, slapped the turn-one wall and collected Johnny Scott and fourth-running Garrett Alberson, erased Timm’s edge of just under 1 second. It also allowed Marlar to use a lane he had just discovered and bolt past Timm for the lead as lap 41 was scored.

“I had found that middle down there in traffic just before that caution,” Marlar said. “Under caution I tried to pack it down where it was good and then took back off and went in there and stuck right through it.”

Timm fought back, though, and actually surged ahead of Marlar on the backstretch working lap 41. But another caution flag — this one for Weiss and Tyler Erb, who spun together in turn four as they battled for third and swept up Brandon Sheppard and Rusty Schlenk — kept Marlar in front.

“I caught a break because he was probably in a good position to come out on top with that deal (if lap 42 had been completed),” Marlar said. “But when them boys wrecked down there the caution came out just for me at the right time.

“It just played out for us, but he done a wonderful job. We got in that traffic and he’s a young kid, and I thought, He might make a mistake here. But he was just doing an excellent job with all the lapped cars.”

Marlar left Vado satisfied with his week of action, which included a $5,000 victory on Saturday and finishes of third, fourth, second and fifth leading into the final two nights of competition.

“The racetrack’s just awesome,” said Marlar, who previously won the Wild West Shootout championship in 2022 when it was held at Arizona Speedway outside Phoenix. “It’s such a nice facility, and I’m glad that we come out here and got this kicked off. I don’t know what the future holds, but if we come back here, do this deal annually here, it’s one heck of a racetrack. It’s the best track out west we’ve been to for sure.

“It’s been a good week. I’ve had a lot of fun. Win, lose or draw, the people treat us awesome out here and it’s a lot of fun.”

Pearson, who celebrates his 50th birthday Jan. 29, started third in his Jason Papich-owned car but was running sixth at the race’s lap-40 caution period. He took advantage of the Weiss-Erb tangle to emerge with his second runner-up and third podium finish of the miniseries.

“I think we had a little bit of luck right there,” Pearson said. “Our car wasn’t quite where it needed to be, but they got a couple wrecks going on there … I didn’t think the track would turn out that good when they plowed it up and wet it (before the feature), but we could move all over it. Pretty good racing there.”

Timm, meanwhile, held his head high after settling for a third-place finish in a new Longhorn fielded by his father Bob, who owns and promotes Mississippi Thunder Speedway in Fountain City, Wis.

“I was excited to get the lead right away,” said Timm, who previous best finish of the miniseries was a fifth on Jan. 9. “I knew if I got the lead I could maybe sustain it for awhile. I was just trying to run my own race and not worry about anybody behind me.

“I was counting the laps down. I think the last time I looked at the board I saw lap 39 and I was like, ‘Man, I might get a chance to win this race.’ And then the yellow came out.

“I think, with experience, I maybe would’ve known better than to leave the top open coming in right away on the restart (to give Marlar a lane). But hat’s off to Mikey. He was fast all weekend. And Earl, too. But I’m happy with third.”

Another beautiful afternoon sets the scene for Sunday’s $25,000-to-win Wild West Shootout. Wind hasn’t been an issue all day and it’s a comfortable 54 degrees as the first modified heat takes the track. … Overall fast qualifier Tyler Erb of New Waverly, Texas, was thrashing on his Rocket chassis after backing into the turn one wall his second qualifying lap. Erb’s pit area drew a swell of onlookers as the Best Performance Motorsports team worked to replace deck, spoiler and quarterpanel parts. Erb pointed to the rear of his machine which featured a distinctive tweak to the right rear bumper where it’s joined at the frame rail. “That’s not standard,” quipped Erb. Meanwhile, crew chief Randall Edwards was busy working on the right front. When asked if the damage was more than just cosmetic, Edwards had a short answer. “I haven’t made it back that far yet,” he said. … Devan Smith of Las Cruces, N.M., avoided a potential catastrophe during qualifying when Kyle Beard of Trumman, Ark., hit the wall and then came back across the track on the frontstretch in front of Smith who had to take evasive action. “I thought he was gonna stay high, so I turned down and just went for it,” said Smith, who reported body damage and his front end towed out due the contact with Beard. … Ricky Weiss of Headingley, Manitoba, earned a $1,000 bonus from Rio Grande Waste Services for setting the quickest qualifying lap of the week. Weiss turned a 13.942-second lap on Saturday, the fastest of any driver in the six events. … After 20 minutes of track prep following qualifying, some drivers, including Rusty Schlenk of McClure, Ohio, were left scrambling to make chassis adjustments. Schlenk, whose Domination Race Car is utilizing Jeff Schildmeyer’s backup engine, was hoping for a slicker track. “It’s deep,” said Schlenk, “and when that sun goes down past that trailer, it’s probably gonna stay hammer down. I thought I was gonna be able to keep up with them tonight, but I need more horsepower.” … The fourth heat is stacked with Saturday winner Mike Marlar of Winfield, Tenn., and Brandon Sheppard of New Berlin, Ill., a two-time winner this week, starting on the front row. The week’s other two winners — Erb and Garrett Alberson of Las Cruces, N.M. — also earned pole positions in their heats.