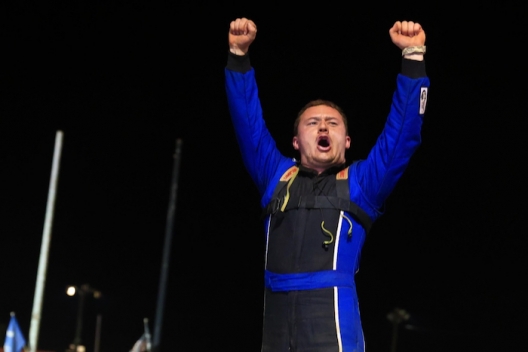 Zack Kloosterman/ZSK Photography
Daulton Wilson celebrates his $7,500 victory at Cherokee Speedway.
What won the race: Inheriting the lead on the 25th lap after problems beset the front-row starters, fast qualifier and new track-record holder Daulton Wilson of Fayetteville, N.C., led the final 16 laps Wednesday at Cherokee Speedway for a $7,500 victory in the unsanctioned Prelude to the World Finals. Polesitter Ross Bailes led 24 laps before he broke a driveshaft entering turn one with debris from the leader's car knocking the rear spoiler off second-running Brandon Overton’s ride. Overton didn’t give up in his spoiler-free ride, edging ahead of Wilson on the backstretch on lap 39 before settling for a second-place finish, 0.637 seconds behind the winner.
Quotable: “I don’t even know how (Overton) held on to that thing,” Wilson said in victory lane. “I knew somebody was back there, but, I don’t know …. this is awesome."
Key notes: Daulton Wilson, who drives a car out of the same Wells Motorsports shop that owns Brandon Overton's cars, earned $10,000 last month in Steel Block Bandit Late Model Challenge Series action at Cherokee. ... Wilson dedicated the victory to a friend who died recently after a bout with Covid-19. ... Despite running without a spoiler, Overton gave Wilson a run in the final laps. "I was just holding it wide open .... I kind of got it half-ass working where I could keep up with him, but it is what it is," Overton said. "Like I said, some things aren't meant to be." ... Besides the lap-24 caution for Bailes, a lap-33 yellow apepared for a slowing Anthony Sanders, who was running fourth. ... Wilson lowered the track record of Ross Bailes in time trials. ... Super Late Models were among three divisions on the weeknight card along with big-block modifieds and 410 sprint cars. ... The event was set to draw cars heading for Thursday's NGK NTK World of Outlaws World Finals at the Dirt Track at Charlotte in Concord, N.C. ... Proceeds from Cherokee's event benefitted Shriners Hospitals for Children. … Chris Madden and Tim Vance scratched from the feature.
Winner's sponsors: Wilson's Longhorn Chassis is powered by a Titan Racing Engine and sponsored by D&E Body Works, Honeycutt Custom Cabinets, Redline Speed Shop, HST Suspension Technologies, New Point Lighting Design, Penske Racing Shocks and Big A's Custom Graphics.
Current weather: Clear, 52°F
Car count: 15
Fast qualifier: Daulton Wilson
Time: 14.411 seconds
Polesitter: Ross Bailes
Heat race winners: Daulton Wilson, Brandon Overton
Editor's note: Results and race details are unofficial.