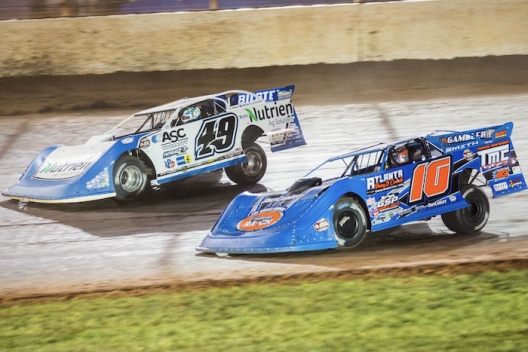 CONCORD, N.C. (Nov. 6) — If there were any questions about his relationship with the Dirt Track at Charlotte, Jonathan Davenport provided a clear answer in Saturday’s NGK NTK World Finals finale.

Pulling away from a back-and-forth mid-race battle with upset-minded teen Garrett Smith of Eatonton, Ga., Davenport dominated the second half of Saturday’s 40-lap World Finals feature to compete a sweep of the Late Model portion of the mega weekend that concluded the season for the World of Outlaws Morton Buildings Late Model Series.

“I love this place,” Davenport said of the pristine Charlotte facility located just across the street from Charlotte Motor Speedway. “This is the racing capital of the world.”

In making the racing capital of the world his personal playground for the weekend, Davenport left no doubt who was the event’s dominant car with his second-half performance in both of the weekend’s 40-lap WoO features. But just like his victory in Friday night's weekend opener, Davenport’s win on Saturday didn’t come without some adversity.

After roaring from sixth to third on the race’s opening lap, Davenport's Double L Motorsports Longhorn Chassis settled in behind early leader Brandon Sheppard of New Berlin, Ill., and the second-running Smith. Just after Smith took the lead from Sheppard on lap nine, Davenport picked up the pace and also moved by Sheppard to take second on lap 10.

Quickly tracking down Smith, Davenport then used a turn-three slidejob to take the lead from Smith on lap 12 and appeared as though he might headed toward an easy victory. But his work wasn’t quite finished yet.

On lap 16, Davenport had trouble lapping the slower machine of Jason Covert, allowing Smith to briefly edge ahead off turn four and lead Davenport but just a few feet at the start-finish line. Davenport pulled back ahead of Smith exiting turn two, but he again struggled to pass Covert in turns three and four and spun the slower driver to bring out a caution.

Because Smith had beaten Davenport across the line on the previous lap, he was moved ahead of Davenport for the ensuing restart.

But the self-inflicted setback proved little challenge to Davenport. Jumping to the high side when the race went back green, he got a strong run exiting turn two on lap 21 and completed the winning pass in turn three.

Davenport ran unchallenged from there, opening more than a straightaway gap over Smith before the race’s final caution with two laps remaining cut his lead to a more modest advantage. The 18-year-old Smith settled for second, while Sheppard closed out his fourth straight championship-winning season on the World of Outlaws with a third-place finish. Eleventh-starting Tim McCreadie of Watertown, N.Y., was fourth with third-starting Chris Madden of Gray Court, S.C., rounding out the top five.

“I gave the lead away being a little too patient with the lapped cars and then I didn’t even mean to hook (Covert) there,” Davenport said of the miscue in traffic that cost him the lead on lap 16. “I was just trying to get up close enough to him to the wall so I could get to the outside of him getting into turn one, but I just barely hooked his quarter-panel and turned him right around.

“I knew the 10 had beaten me the previous lap and I thought, ‘Oh no, what are we gonna do here?’ But I just kept trying that top down there. It got me to third and almost to second on the first lap. Everybody kind of went for the rubber (after the lap-16 restart) and I just blasted the top. It stuck somehow.”

Smith, a Super Late Model rookie making his first appearance at Charlotte at the World Finals, impressed in Saturday’s prelims with the fastest time in the second of the night’s two qualifying groups and an easy heat race victory. After taking the the lead from Sheppard, he appeared to perhaps be headed for an upset victory until Davenport dropped him to second.

“The heat race win felt pretty good, but leading those laps couple of laps right there felt amazing,” Smith said of his breakout performance in his Cody Mallory-wrenched Rocket Chassis. “It feels really good to come up here this weekend and have speed all weekend. It’s fun racing with these guys. Racing with them, you see how they race you and just learn from them.”

Notes: Twenty-one of the race’s 25 starters were running at the finish with 18 cars on the lead lap. … The race was slowed by four cautions. The first was for Covert’s spin after contact from Davenport on lap 12. … The second caution waved on lap 19 when contact between Chris Ferguson and Tyler Erb sent Ferguson spinning up the track and into the turn-one wall. Ferguson was OK, but his car was heavily damaged. … The third caution came on the ensuing restart when Kyle Strickler, Ricky Weiss and Josh Richards all tangled in turn one. … Covert slowed to cause the final caution with two laps remaining.