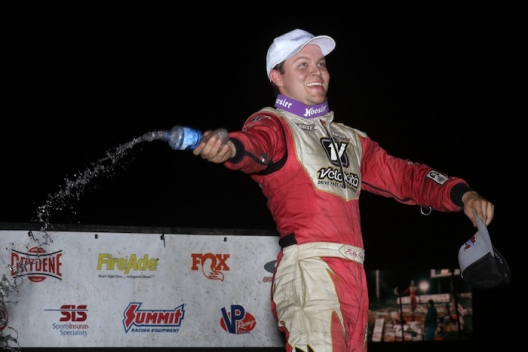 And the Oakwood, Ill., driver's aggression paid off when he inherited the lead because of Brian Shirley's lap-23 flat tire and he led the rest of the way for a $5,500 payday and his series-leading seventh DIRTcar Summer Nationals victory of 2021.

Pierce, whose third triumph in Macon's big event followed victories in 2016-17, kept runner-up Ryan Unzicker in check the final 77 laps, taking the checkers seven-tenths of a second ahead of the El Paso, Ill., driver, who led the first two laps.

"We got pretty lucky tonight with (Shirley) having that flat. It would've been tough to get by him," Pierce said. "I was very aggressive at the start of the race with Ryan (Unzicker) to get by him, because I knew (the track surface) was going to rubber up. I threw that slider really early in the race — he was probably like 'What the hell?' — but I knew I had to get position.

"Brian had that flat on that caution, and I was like, 'Well, here we are.' So just ride from there and not make any mistakes. It got pretty hairy in lapped traffic a few times, so I'm glad we were able to keep the nose clean and hang onto it."

The fourth-starting Shirley of Chatham, Ill., led laps 3-22, but had a right-rear tire going down as a caution appeared. He pitted for new rubber and ended up eighth at the finish.

Pierce had sympathy for Shirley's fate in a race where drivers ran mostly nose-to-tail the last two-thirds of the race with passing at a premium.

"With Brian, I've been on that end of it here a couple of times, like in (Lucas Oil Late Model Dirt Series) races I've had a flat leading it, or running second," Pierce said. "So it sucks, for sure, so I feel bad for him, but it feels nice (to win)."

Pierce did his best to stay focused behind the wheel amid nine slowdowns in the race that lasted until nearly 11 p.m. What did he tell himself under caution? "Don't screw up," for one.

"It actually seemed like by car was better (on restart), but I didn't like to see (cautions) because I didn't want to get settled down. And sometimes you take the green on the restarts in the rubber, and it really throws you back in the seat. You've just gotta keep your mind focused."

Unzicker, who finished second to Pierce in series action the previous night at Spoon River Speedway felt better about losing at Macon rather than in the final laps like he did in Banner, Ill.

"I'm definitely a lot happier tonight. Last night, I feel like we had the best car. We just came up a little short, and that gets you down," Unzicker said.

The polesitter led two laps before Shirley got out front, then gave up the second spot to Pierce on the eighth lap. Unzicker said he "didn't have the best car at the beginning of the race. So we just fell in line and ran second and just hoped the tires held up, and they did."

Eight cautions and a red flag hampered the feature.

A lap-six yellow flew for a flat tire for Greg Kimmons, and before the race went back to green, Ryan Miller, Cody Bauer and Jake Little were part of a turn-three collection of cars. Another caution appeared on lap 14 when Jason Suhre spun in turn two and a lap-24 flew for Joe Godsey as Shirley pitted to replace his flat right-rear tire. Shirley spun on the ensuing restart for the fifth yellow.

The final slowdown — which turned into a red flag — was on lap 98 when Dean Carpenter's car ended up wedged atop the driver's side door of Tanner English's car in turn two. It took several minutes to disconnect the cars.

Notes: Pierce has 34 career series victories, one behind Shirley. ... Trevor Gundaker of St. Charles, Mo., started outside the front row but dropped back to seventh by the 14th lap. He ended up in that position. ... His brother Gordy Gundaker, a two-time race winner, moved up to fifth in the finishing order thanks to the Moos disqualification. ... The series heads Friday to Farmer City (Ill.) Raceway for a $10,000-to-win event.

Bobby Pierce, who won the Herald & Review 100 in 2016 and ’17, overtook Tanner English late in the distance to capture the first heat. “I’m glad the car stuck into one,” Pierce, who starts third in the feature, said of his deciding pass. … Ryan Unzicker topped the the third heat and drew the pole position as he seeks to repeat his victory in the 2015 Herald & Review 100. But it’s also been a grueling night for the El Paso, Ill., driver and his crew, who have had to replace a radiator that developed a hole and swap transmissions. … Trevor Gundaker obviously took notes while watching his older brother, Gordy, master the inside line around Macon en route to winning the Herald & Review 100 in 2018 and ’19. The teenager looked like his sibling as he tip-toed around the bottom to pass Jason Feger for a Heat 4 triumph; he starts the feature from the outside pole. … A surprise entrant was Logan Martin of West Plains, Mo., who decided to make his first-ever start at Macon to begin a three-race Summer Nationals swing through Illinois. He transferred with a third-place finish in the second heat. … Ashton Winger’s night began in rough fashion (he failed to log a qualifying lap after folding under the nose of his car) and didn’t get any better in his heat race (a scramble turned him around and forced him out early with bodywork damage). … Mitch McGrath spun in his heat after a scrape with Rusty Griffaw. … Mississippi’s Carpenters were back in action after skipping Wednesday’s program at Spoon River Speedway to repair damage their cars sustained in Tuesday’s massive wreck at Knox County Fair Raceway. But while Dean transferred through his heat, Brandon didn’t record a qualifying time due to trouble during time trials and was a DNQ.