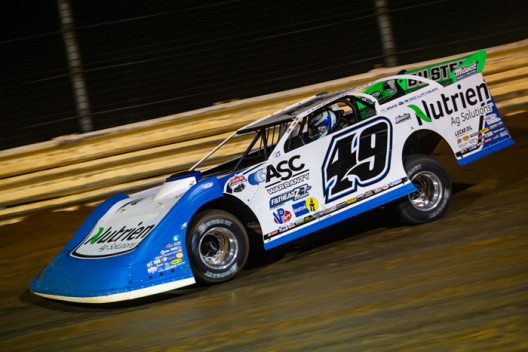 PORT ROYAL, Pa. — There are plenty of nights when Dirt Late Model drivers sweat over their suspension setups and tire choice during rain delays between preliminaries and feature events. Sunday wasn't one of them for Jonathan Davenport at Port Royal Speedway.

What did the Blairsville, Ga., driver and his Double L Motorsports crew do before Sunday's River Valley 40 on the Lucas Oil Late Model Dirt Series?

"We already had the tires ready to go, everything done on the car," the three-time series champion said of the brief evening rain shower. "We just all went in there and took it easy and watched a little TV and ate a sandwich — then came out here to get ready to do some business."

And did Davenport ever take care of business.

Jumping into the lead from his pole position, Davenport wasn't seriously challenged in grabbing his first Lucas Oil Series victory since last September with a $10,000 payday, the 50th of his series career.

Davenport added the Lucas Oil triumph to seven non-series victories this year — including wins on Thursday and Friday — for an eight-victory total at mid-spring after winning only five features all of 2020.

"We was just in a slump last year," Davenport said. "We went to Arizona (in January) and found some speed and we went to Florida (and February) and struggled, but now I think we've almost figured out why we struggled there."

Davenport kept runner-up Shane Clanton of Zebulon, Ga., in check over the final laps, winning by a 0.475-second margin while fellow front-row starter Brandon Sheppard of New Berlin, Ill., was third. Seventh-starting Chris Ferguson of Mount Holly, N.C., and Stormy Scott of Las Cruces, N.M., rounded out the top five in a race slowed by a single-midway caution when Colton Flinner slowed in turn four with a flat right-rear tire.

Davenport had a few difficult moments trying to slide past slower cars, but he maintained high-side momentum late in the race when Clanton was threatening to make it interesting.

"He must've been easing in on me, because I felt the top dying, but I just never thought the bottom was where I needed to be," Davenport said. "He was too close to for me to take that chance. I knew if he went to the top that he'd get a big run, and he could slide (past) me at the next end. So I just decided to move up a little bit and beat the hell out of the wall and just make sure I could get a good run down the straightaways."

"I was just paying attention to what I was doing," he said. "I got really tight there at the end getting in the corner. So I was having to slow up to use my brake pedal to turn ... and I was having to pitch a little too much."

Clanton, who notched his third top-five finish on the series in 2021 for Skyline Motorsports, said he was ready to go another 40 laps.

"When your car's that good and you can be competitive, you can (race) all night long," he said. "We worked our tails off the last week and a half and tried to get our car better. We've got it better and hopefully we can keep that momentum going."

Clanton wrested the second spot from Sheppard on the lap-21 restart, but couldn't put much pressure on Davenport.

"I was just a little too tight there," he said. "It got a little slick across the middle (of the corners) and I'm too tight to get back into the track getting into the corner. Overall it was a good night and the Capital Race Car's pretty good right now."

"J.D.'s been really tough. Congratulations to him and Shane there," he said. "We had a pretty good car. We were a little bit free, but we're happy with it and as bad of luck as we've been having lately, we're definitely glad to get us a nice top-three (finish). We definitely wanted to be a couple of spots better, but it's a nice little confidence-booster going into next weekend."