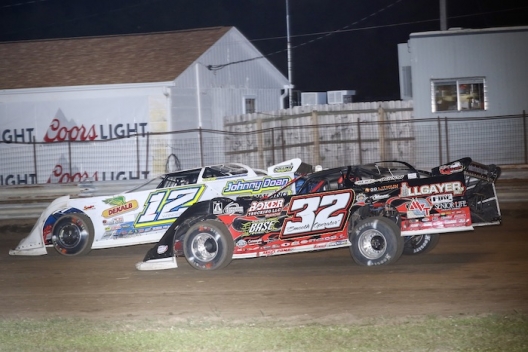 Brendon Bauman/brendonbauman.com
Ashton Winger (12) topped Bobby Pierce (32) for his first Summer Nationals win.
What won the race: Surviving a close call in traffic with two laps remaining, Ashton Winger of Hampton, Ga., led every lap of Tuesday’s DIRTcar Summer Nationals feature at Knox County Fair Raceway to earn $5,000 for his first career series victory. The first-year series regular took the checkers 2.408 seconds ahead of points leader Bobby Pierce in winning the first-ever series event at Knox County’s half-mile fairgrounds oval.
Key notes: Pierce pressured Winger for most of the way and was within striking distance when Winger got into the back of a lapped car entering turn-one on lap 28. But Pierce had to check up too, allowing Winger to recover and pull away. ... The race was marred by a large pileup on a lap-six restart that left multiple cars with heavy damage and caused a 20-minute red-flag period. Ryan Unzicker and Donny Walden were among the drivers receiving the worst of the damage with Walden’s machine getting upside-down and Unzicker’s ending up against the outside wall. Officials reported that the only injury was a cut to the hand for Dean Carpenter that was treated by the track’s safety team. ... Knox County's first-ever series event kicked off the tour's fourth week and was the 13th event of this year's series. ... Defending series champion Brian Shirley of Chatham, Ill., did not enter Tuesday's event. He was third in points going into the night. ... This week's tire rule for the series again allows the option of a softer LM-20 for the right rear; teams had been restricted to the harder LM-40 for the right rear each of the last two weeks. ... The track typically hosts a single event a year with Iowa's Todd Frank winning the last two fair race events (2018-19) for unsanctioned Limited Late Models. ... The Knox County Fair runs from Monday to Saturday.
On the move: Jason Feger of Bloomington, Ill., started 22nd and finished fifth after escaping the lap-six wreck with cosmetic damage to the right-rear of his car.
Winner's sponsors: Winger’s MB Customs Race Car is sponsored by E-Z-Go, Keyser Mfg., Integra Shocks, Johnny Doan Plumbing, Boyd-Bilt Fabrication, Spring-Pro, Collins Signs, Turkey Creek Snacks, The Realty Queen Team and Advanced Technology Motorsports.
Points chase: After Knox County: 1. Bobby Pierce (857); 2. Tanner English (817); 3. Ashton Winger (709); 4. Brian Shirley (697) 5. Jason Feger (670) 6. Mtich McGrath (547); 7. Tim Lance Sr. (545); 8. Joe Godsey (534); 9. Frank Heckenast Jr. (504); 10. Billy Moyer Jr. (422).
Current weather: Clear, 73°F
Car count: 22
Fast qualifier: Ashton Winger
Time: 19.810 seconds
Polesitter: Bobby Pierce
Heat race winners: Ashton Winger, Bobby Pierce, Tanner English
Next series race: July 7, Spoon River Speedway (Banner, IL) $5,000
Editor's note: Results and race details are unofficial.
From staff reports

KNOXVILLE, Ill. (July 6) — As he closed in on his first career DIRTcar Summer Nationals victory late in Tuesday’s 30-lap feature at Knox County Fair Raceway, Ashton Winger began to think that the bad luck that plagued much of his first three weeks on the tour was finally behind him.

But with less than three laps around the big half-mile oval remaining, misfortune nearly bit Winger again when a lapped car slid into his groove entering turn one, nearly forcing Winger into the outside wall and perhaps even over it for a visit to the fast food chicken restaurant beyond.

“I definitely thought I was going to end up over there in the Chester’s getting a three piece and a soda,” Winger joked after the race. “A lot of stuff’s gotta go your way to win these races.”

Fortunately for Winger, the outcome of the run-in with traffic did go his way. He turned down underneath the slower car just in time to not only avoid careening over the wall but also soon enough to block the hard charging Bobby Pierce. With composure regained, Winger pulled away through the final two and a half laps, taking the checkers 2.408 seconds ahead of Pierce’s No. 32 machine to earn his first Summer Nationals victory.

Tanner English of Benton, Ky., was just behind Pierce in the third spot, while Mitch McGrath of Waukesha, Wis., notched his best career Summer Nationals finish in fourth and Jason Feger of Bloomington, Ill., recovered from mechanical problems that forced him to miss his heat race and start from the tail of the 22-car field to round out the race’s top-five finishers.

The event, which kicked off the fourth week of this year’s seven-week Summer Nationals campaign, was the tour’s first-ever visit to Knox County’s sprawling fairground’s oval. The track hasn’t hosted regular Late Model racing in many years and didn’t draw a large field on Tuesday with just 22 entries and a number of tour stalwarts sitting the event out. But that didn’t dampen Winger’s excitement over finally earning his breakthrough series win.

“I know it’s just a $5,000-to-win race, but that 32 car is not easy to beat. And Tanner too,” Winger said after climbing from his family-owned MB Custom’s machine in victory lane. “I wish that Squirrel (four-time series champion Brian Shirley) and Sheppy (former champion Brandon Sheppard) were here so we could stack up against all them guys. But shoot, I’m just a Georgia boy out here trying to make everybody back home proud.”

Winger’s home-state fans following the 21-year-old’s first season on the Summer Nationals from afar can not only be proud of his breakthrough win — he’s the first Georgian to win on the historic Midwest tour — but also for the persistence and grit he’s shown during his tumultuous path to scoring that victory.

Before making it to victory lane on Tuesday, Winger had to overcome a host of setbacks on tour including a blown engine in the series opener at Brownstown (Ind.) Speedway, a totaled race car after a violent rollover wreck at La Salle (Ill.) Speedway and multiple run-ins with the wall.

But those obstacles only made Tuesday’s victory even sweeter.

“We’ve worked so hard for this. We’ve been through so many issues,” Winger said. “We’ve just been clawing and clawing. I’ve torn up cars, I’ve blew up motors, I’ve flipped cars, and it’s all led to this. This is so awesome.”

While some teams may have called an end to their Summer Nationals campaign after all the setbacks that Winger faced, Winger and his crew kept faith and soldiered on largely because he had shown plenty of speed when not being hit with poor luck, including a pair of third-place finishes and no result worse than 10th any time he managed to make it to the end of a race.

Now that Winger has broken through the run of bad luck, he hopes there’s more wins on the horizon, and maybe even a string of victories like the four-race win streak put together by Pierce during the tour’s third week.

“Our race car’s been awesome the whole time,” Winger said. “I’ve just been doing a bunch of silly stuff getting us behind. Just growing pains. We got to where we were fast, but I was crashing out of races. Then last week it seemed like we were anywhere from third to 10th and now we’re winning. I hope we can do like Bobby and string ‘em on.”

The race was marred by a large pileup on a lap-six restart that left multiple cars with heavy damage and caused a 20-minute red-flag period. Ryan Unzicker of El Paso, Ill., and Donny Walden of Towanda, Ill., were among the drivers receiving the worst of the damage with Walden’s machine getting upside-down and Unzicker’s ending up against the outside wall. Officials reported that the only injury was a cut to the hand for Dean Carpenter of Coldwater, Miss., that was treated by the track’s safety team.

Notes: Nine of the race's 22 starters were running at the finish with six cars on the lead lap. ... Unofficially, Winger is the 104th different driver to win a Summer Nationals race, and Knox County is the 104th different track to host a series event. … Winger is the first first-time winner on this year’s tour. … Four-time and reigning series champion Brian Shirley of Chatham, Ill., was a no-show at Knox County despite holding the third spot in series points. Shirley has indicated he plans to compete in series events closest to home but expects to follow Lucas Oil Late Model Dirt Series events July 16-24.

Outside front-row starter Ashton Winger generally likes big tracks, but he's not crazy about Knox County's flat half-mile that makes things a little dicey working the steering wheel and pedals heading into the corners. But he's ready to battle polesitter Bobby Pierce. "I'm not going to lift until he does," Winger said, wondering what might happen heading into turn one on the first lap. ... Winger's father Gary was checking out the right-front tire that showed some damage from something apparently run over in the heat race. Because of the five-tire limit, and Winger's desire to use a harder right-rear tire in the main, they'll have to hope the right-front tire hangs on. "It's a fast track and it's on the right front," Gary Winger said. "I don't think (Ashton) cares. I'm probably more worried about it than he is." ... Jason Feger will start on the tail after scratching from his heat race with a broken bracket; the team was feverishly making repairs during the rest of prelims. ... Joe Godsey, who ran second early in his heat race, ended up getting into the turn-one wall. The team replaced a bumper and made spoiler repairs before the feature. ... The big track is hard on engines and drivers will be keeping an eye on temperature gauges. Third-starting Tanner English told pit reporter Georgia Henneberry that they "may put some holes in the nose so (the engine) stays cool." ... English also visited with series director Sam Driggers in the pits to express concerns about slower cars holding their lines when being lapped. With a three-second-per-lap difference among the fastest and slowest cars, the frontrunners will likely lap some drivers two or three times. ... Tim Lance Sr.'s team has to repair plastic on the left front of his car after contact when Rich Bell got sideways on the start of a heat race.

(8 laps; all transfer with winners redrawing)

Four-time and reigning series champion Brian Shirley of Chatham, Ill., was a no-show at Knox County despite holding the third spot in series points. Shirley has indicated he plans to compete in series events closest to home but expects to follow Lucas Oil Late Model Dirt Series events July 16-24. ... Also missing and staying at Brian Shirley's shop to work on the car he rolled at Beaver Dam (Wis.) Raceway is Thomas Hunziker of Bend, Ore. Gary Winger, who also spent time at Shirley's shop working on his son Ashton's car, said Hunziker just about has the car ready to go and is awaiting shipped parts from Rocket Chassis. ... Tim Lance of Brimfield, Ill., is among few Late Model drivers in competition at Knox County with laps at the half-mile fairgrounds oval. The track is less than a half hour from Lance's home. ... There was no established Super Late Model track record at Knox County, so Tuesday's fast-timer will stand as the track record-holder. ... Knox County hosts an event in a stretch of nine straight series races in Illinois. ... Mitch McGrath of Waukesha, Wis., was back on the series after engine woes in Sunday's event at Lincoln (Ill.) Speedway forced him to go to his second (and more powerful) powerplant. ... Coldwater, Miss., father-and-son drivers Dean and Brandon Carpenter were back on the series after competing in early tour events. They're traveling along with fellow Mississippians Jason Milam of Guntown and Blake McClain of Coldwater.