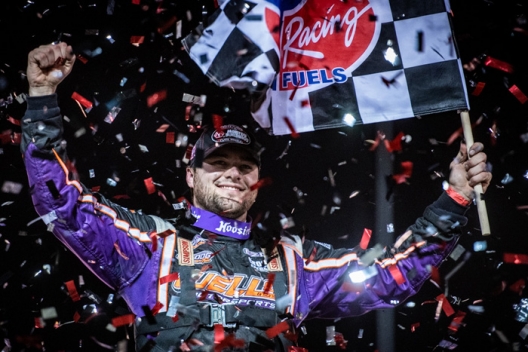 The victory was Overton’s 14th career World of Outlaws Morton Buildings Late Model Series win, but his first-ever at Volusia Speedway Park, a place the likable Georgian said he usually dreads. With a triumph under his belt and a Gator Trophy for his shelf, perhaps Overton’s views of the challenging track will change.

“Hell man I’m excited. I’ve been wanting one of these alligators (Volusia’s unique DIRTcar Nationals trophy) for a long time so I finally get me one,” said Overton. “I’ve had the lowest of lows here, driving other people’s cars and my own stuff. I’ve never been really good here, so to finally get it, it’s a relief I’m telling you.

“I dread … every time I look at the schedule and I see Volusia, I’m like, ‘God I suck there. I don’t want to go there.’ But we keep working on it and working on it and we finally got it. I just want to thank my crew. They’ve busted their butts. We tore up a motor and tore up a car. Kent, Steve, Ryan and Britt … I’ve got a whole list of ‘em. There’s a whole group of people who help me do this and I’m just fortunate to keep getting to drive good race cars.”

Overton looked like anything but a driver who dreaded the annual Georgia-Florida Speedweeks trip to the Barberville, Fla., track. He slid ahead of Bronson exiting turn four to take the lead on the opening lap. By lap 10, Overton’s lead ballooned to more than three seconds. Other than the two late slow downs, Overton cruised comfortably out front. His only close call came on lap 26 when he had to get on the brakes to keep from hitting Ricky Weiss of Headingly, Manitoba, who drifted up in front of him exiting turn two. That allowed Bronson to cut a half-second off the lead.

“Our car’s really been good all week,” said Bronson, “we’ve just been having stupid stuff happen. Last night we broke a distributor cap. The other day you know, we should have finished in the top five and blew a tire out. Things just ain’t went our way this week. We’ve had a pretty fast car all week. Things just ain’t really been great you know, but overall the guys are gonna keep working  and we’re gonna keep being here. We’re just a few spots away and maybe we’ll get it tomorrow.”

The race was slowed two times, once by yellow and once by a red flag. Overton, who led by as much as 3.6 seconds, saw a 2.961-second advantage erased when third-running Brent Larson of Lake Elmo, Minn., brought out the first caution when he blew a left rear tire on lap 34, ending his pursuit of a career-high World of Outlaws finish. Larson’s best finish with the national tour is fourth.

A lap after the restart, Ricky Weiss of Headingly, Manitoba, tagged the frontstretch wall hard, collecting both Ryan Gustin of Marshalltown, Iowa, and Blake Spencer of St. Augustine, Fla., as Weiss’s machine landed in a shower of sparks toward the end of the straightaway. Officials immediately dropped the red flag to make sure the drivers were OK, particularly Weiss, whose car turned right into the outside wall with a heavy impact.

The red flag left Overton just five laps from the finish to defend the spot he’d held from the onset. He had little trouble on the restart, however, as he quickly pulled away again leaving Bronson to worry with the hard-charging Moran.

“Everybody’s been giving me (crap) all week about not running that lip,” said Overton. “The first couple features I run right through the middle all night and I kept telling myself just stick with it. If that top dies, we’re gonna get ‘em. It’s really cool to have a race car to run through the middle like that not have to rely on the cushion. But you know, them boys get after it, so hat’s off to them.”

After the redraw among heat winners, Overton was slated to start fourth, but inherited a front row starting spot when Bobby Pierce of Oakwood, Ill, was forced to swap cars.

“It really sucks for Bobby (Pierce),” said Moran. “He was really better than me in that heat race and he probably would have had something for Brandon there in the feature. We just kinda missed it. I got in the wall there about halfway and killed my spoiler and it just took me out of contention there. We salvaged (a good finish). We fell back to fifth or sixth after we’d come up one time. All in all, it’s still a good night.”

Notes: Pierce, who was slated to start second, had to make an engine change after his heat win. His team ran out of time, forcing Pierce to jump into Reid Millard’s car and start at the tail of the field. He made two laps and parked. … Nineteen of the 28 starters completed 40 laps. … Larson, who started third and ran among the top four until his demise, changed his tire and managed a 16th-place finish. … After challenging for a podium spot early, Tony Jackson Jr. of Lebanon, Mo., began to fade midway through, dropping back to seventh by lap 20 and 10th on lap 25. He eventually finished 19th, the last car on the lead lap. … Scott Bloomquist of Mooresburg, Tenn., entered the race fifth in series points, but after running inside the top-10 for most the feature, he pitted with mechanical trouble on lap 37 and finished 21st, losing valuable points to Bronson (third), Dennis Erb. Jr. (seventh), and Eckert (fifth) who were each within 24 points of Bloomquist entering the event.

Fearing he may have hurt his engine during his heat race win due to a broken fan belt that caused overheating, outside front row starter Bobby Pierce of Oakwood, Ill., was attempting to change a motor before the feature. It was all hands on deck as his crew thrashed to make the change. Meanwhile, series officials gave the 10-minute call, leaving Pierce scrambling to find a ride for the main event as competitors were rolling onto the track. Unable to finish the change, Pierce will start the main event from the rear in Reid Millard's car.

Volusia Speedway Park’s pit area sported a rather subdued atmosphere — and more space — on Friday after a long, rain-delayed Thursday program ended at 2:02 a.m. Teams are tired after the marathon evening and Friday’s field is down to 38 entries with about a dozen competitors deciding to head home early. … Friday’s weather forecast is much the same as Thursday’s: a partly sunny afternoon with highs in the 80s but the chance or showers and thunderstorms spiking up from 7-9 p.m. … Among the drivers done for the week: Monday-night winner Tim McCreadie (engine trouble on Thursday), Hudson O’Neal (Thursday motor woes), Jimmy Owens, Ricky Thornton Jr., Billy Moyer Jr., Dan Stone and Jason Fitzgerald. … The DIRTcar Nationals has also ended early for WoO rookie hopeful Parker Martin of Milledgeville, Ga., who was banished from further competition this week due to the post-race actions of his father and team owner Chris. The elder Martin loudly brought a complaint to WoO Late Model director Casey Shuman outside the WoO trailer after Thursday’s feature and, while being separated from Shuman, reached out and knocked Shuman’s hat from his head, prompting Shuman to tell Chris to load up and leave the pit area. … After his strong run from 23rd to the top five in Thursday’s feature ultimately ended with a sixth-place finish because his Rocket Chassis house car’s engine dropped a cylinder with 10 laps remaining, Brandon Sheppard of New Berlin, Ill., will attempt to snap out of his winless Speedweeks with a fresh powerplant installed. … Cade Dillard of Robeline, La., repaired the significant front-end damage his car sustained in a multi-car accident on the first lap of Thursday’s feature that began when apparent brake problems caused him to spin in turn two. … Darrell Lanigan of Union, Ky., had his Viper Motorsports XR1 Rocket car sandwiched in the middle of the lap-one tangle. The car was towed off dangling between two wreckers and his crew worked on the mangled bodywork until 5 a.m. and then awoke to continue making repairs to its front and rear ends later in the morning. … Brandon Overton of Evans, Ga., felt his chances of advancing to the front from the 20th starting spot in Thursday’s A-main were good after he recovered from a broken rearend during heat action to win a B-main, but he caught a piece of the first-lap crash and was eliminated with right-front damage. … Scott Bloomquist of Mooresburg, Tenn., has pulled out his backup car that sports more white coloring after running his mostly black machine for the first four nights of the DIRTcar Nationals.