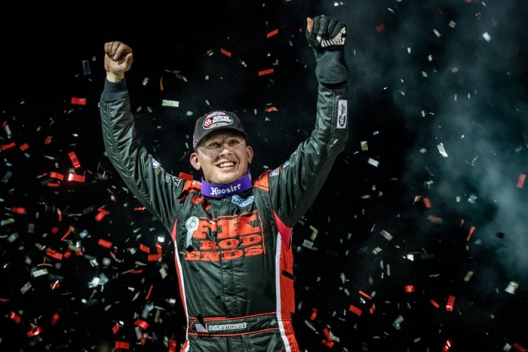 BARBERVILLE, Fla. — A contender each night during Volusia Speedway Park's 50th DIRTcar Nationals, Devin Moran never quite put it together at the big D-shaped track. Until Thursday night.

After setting fast time and winning his heat race, the 26-year-old Dresden, Ohio, driver rallied from his fifth starting spot in the 40-lap feature and raced to a $10,000 World of Outlaws Morton Buildings Late Model Series victory.

The leader of the DIRTcar Nationals's week-long Gator Championship points extended that margin over runner-up Bobby Pierce of Oakwood, Ill., while notching his fifth career WoO victory and first since 2018.

"It's awesome to finally get a Gator. We didn't even know we were going to come here and it's happening, so it's pretty cool," said Moran, who broke the previous night running in the top five after finishes of second and third. "Our car's been fast all week, his has been fast all week. We've got one win apiece now. Hopefully Mother Nature holds off and God lets us come out here and race and have fun and show out for these fans, because I know if we get to race it's going to be a big crowd the next two nights."

Moran, who overtook Madden on the 23rd lap, celebrated in victory lane after 2 a.m. because rain showers that arrived during Late Model heats delayed the restarting of the program until after 11 p.m.

"This is awesome," Moran said after climbing atop his Tye Twarog Motorsports car to celebrate. "We've had such a fast race car all week and I just haven't been able to quite get there. I was kind of bummed when we got that pill draw (starting fifth).

Pierce quickly charged into contention one night after a late flat tire knocked him out of the lead, but he couldn't keep up with Moran after grabbing the second spot from Madden on the 31st lap.

"Congrats to Devin on the win there. I think he snookered us on tires and that explains why he was pulling away there pretty good," the 24-year-old Pierce said. "All in all, the car's really good. I was driving my butt off there. I guess we needed some green-flag runs to catch him, but all in all a great night to finish second with how the night started.

"My (rear) deck height was about a half-inch or 3/8-inch too high there after qualifying, so we got docked a row (in the heat lineup) and came back and got second. Starting ninth (in the feature), that was a pretty deep spot, I felt like, for just 40 laps. That's not that long of a race, I feel like. I knew by 10 laps we were already up to to third or fourth of something, and I was like, 'Man, we could possibly win this thing.' "

The 54-year-old McDowell, who led the first three laps before Madden took command, had to catch his breath after trying to keep up with the pair of twentysomethings ahead of him.

"Those two little young (smart-alecs) up there, if you add their ages together, I'm still older than they are," McDowell cracked to announcer Ruben Mireles in victory lane. "I'm glad I didn't win — you'd have had to talk to them first, I'd been back here trying to get my (breath). I'd have to get me an E-Z-Go golf cart to get back to the truck."

Struggling earlier in the week, McDowell took a break from Wednesday's action and got his brother's Shane McDowell Racing ride into contention.

"We've been working and right there, been on both sides of the spectrum — the front side and the back side. You just have to drive awful hard in these conditions. So it's a little bit out of my wheelhouse, and a little bit out of my age group, but we go it done," McDowell said. "The track, obviously they had the rain and the track conditions were different. Those guys that are running good and up front, they've just got their package together really good. That's what you work for, I mean, Shane and the boys have been working hard on getting that together, and me driving this place different than I've ever had to really drive it."

The most serious of six cautions appeared on the second lap when seventh-running Cade Dillard got sideways in turn one, triggering a multicar pileup between turns one and two. Getting the worst of it was Darrell Lanigan, whose right-front wheel was lodged into the engine compartment of Chad Finley's machine. Josh Richards, Chase Junghans and Shane Clanton — whose car also nosed under Lanigan's machine — were among others involved. Six drivers retired and two wreckers were required to remove the cars of Lanigan and Dillard.

DIRTcar Nationals action is scheduled to continue with $10,000-to-win WoO events Friday and Saturday with big-block modifieds also on the card.

Notes: Moran notched his second career Georgia-Florida Speedweeks Super Late Model victory; his first came last year at East Bay Raceway Park in Gibsonton, Fla. ... His father Donnie Moran, the Hall of Fame driver with four career Volusia victories, didn't make the trip to Florida. But discussing the race on the phone beforehand with Devin, he told his son to win. "And that's what we did," Devin said. ... Fifth-finishing Dennis Erb Jr. climbed as high as third before slipping back a few spots. ... Reigning WoO champion Brandon Sheppard of New Berlin, Ill., rallied from 23rd to sixth, but his hopes of finishing higher were dashed by engine trouble that left him running on seven cylinders for the race's final 10 laps. ... Fifteen drivers finished on the lead lap. ... Several of the night's 50 entrants were either sidelined by mechanical problems early in the night or elected to sit out after the rain hit.

Devin Moran remained perfect in heat-race competition during the DIRTcar Nationals, earning his fourth prelim victory in as many nights. … Piloting a new XR1 Rocket car, Chris Madden enjoyed his best qualifying effort of a struggle-filled week with a triumph in the second heat. … Brandon Overton retired from the fourth heat with a broken rear-end housing. His crew replaced the rear and he charged forward to win the second consolation with a late-race pass of Brandon Sheppard. … During the rain delay, Rick Eckert looked on the bright side of his fifth-place finish in the second heat. “I didn’t run good, but I’m happy I already ran my heat,” said Eckert, who struggled with a brake issue but felt fortunate he wouldn’t have to hit the track when it was still extremely heavy after the showers. … Hudson O’Neal’s strong Speedweeks apparently came to an end with engine trouble that was diagnosed in his Double Down Motorsports car after his fourth-place finish in the first heat. His team was planning to bypass the final two nights of the DIRTcar Nationals to begin regrouping from a busy stretch on the road. … Billy Moyer Jr. decided to load up for the night when the rain arrived and, with more wet weather threatening the Friday and Saturday programs, he rolled out of the pit area to head back to his shop in Batesville, Ark. … Among the drivers who opted to skip the resumption of Thursday’s program to save their equipment: Brian Shirley, Michael Norris and Tyler Millwood.

A rain shower that arrived at the track midway through the third heat race forced cars off the track at about 7:35 p.m. The precipitation intensified shorty thereafter, but as of 8:50 p.m. there was no rain falling and the track crew was on the racing surface attempting to recondition it in hopes of resuming competition. The 10-minute horn for cars to help pack the track blew after 9 p.m. and after a series of track-packing and hot-lapping sessions, it appeared action would resume before 11 p.m.

Bobby Pierce timed second-fastest in his qualifying group, but a “droop” rule infraction officials measured on his car in tech gave him a one-row penalty for his heat that moved him from the pole position to the third starting spot. … Tim McCreadie was fifth-fastest in his time-trial group but found terminal engine trouble in his Paylor Motorsports Longhorn house car upon returning to the pits. With McCreadie not running for WoO points, he scratched from further competition and indicated that his week of racing at Volusia was over early. … Ashton Winger didn’t record a qualifying lap because of problems that developed under the hood of his family-owned during hot laps. The 2020 WoO Rookie of the Year said his DIRTcar Nationals was done; in addition, with two other engine malfunctions already striking him during Speedweeks, Winger noted that his plans for chasing the WoO tour this year were effectively over. ... Dan Stone broke a rear end in time trials and scratched for the night.

Thursday’s World of Outlaws Morton Buildings Late Model Series program comes on a day that saw mostly sunny skies with a high temperature reaching into the 80s, but there is an increasing chance of rain and/or thunderstorms as the evening rolls along. … The 50-car field includes Johnny Scott of Las Cruces, N.M., who is making his first start of the week driving a Longhorn Chassis that his team purchased from Randy Weaver and still carries the Tennessee drivers’ red colors. … Devin Moran of Dresden, Ohio, and his Tye Twarog Motorsports crew made significant repairs to their Longhorn car, replacing, among other items, the broken driveshaft that knocked Moran from Wednesday’s feature, bellhousing, transmission and rearend gears. … Tim McCreadie of Watertown, N.Y., also has a thoroughly rebuilt Paylor Motorsports Longhorn car; after a broken left-rear hub eliminated him early in Wednesday’s feature, his team changed the rearend and other components as a precaution due to the rough track conditions. … Dale McDowell of Chickamauga, Ga., will return to competition after sitting out Wednesday’s program. He decided to scratch from the show after realizing shortly before the start of hot laps that his Bloomquist Race Car had sustained more damage in a Tuesday incident than his team originally thought. … Boom Briggs of Bear Lake, Pa., is driving his newer XR1 Rocket car after parking his older machine following Wednesday’s heat action. … Brent Larson of Lake Elmo, Minn., didn’t use his WoO emergency provisional to start Wednesday’s feature after breaking the transmission in his car during a B-main. … WoO rookie candidate Parker Martin of Milledgeville, Ga., also bypassed a WoO emergency provisional available to him on Wednesday, opting instead to get an early start on pulling the engine from his older car to bolt it in his newer mount for tonight’s show. … Mark Whitener of Middleburg, Fla., will make his first start of the week in the Dale Mosley Racing No. 385 after spending the first three nights driving his own No. 5. … Joe Godsey of Edinburgh, Ind., has turned heads with his strong qualifying efforts — most notably a group fast-time honor on Tuesday — but he’s still looking for his first feature start of the week. He’s found the going tough in heat racing. “I’ve never been to a track where one small mistake can cost you more,” Godsey told DirtonDirt.com’s Ben Shelton. … Interesting note about the top-three finishers in Wednesday’s WoO feature: runner-up Hudson O’Neal of Martinsville, Ind., previously drove both Kyle Strickler’s PCC Motorsports car and third-place Ricky Thornton Jr.’s SSI Motorsports entry.