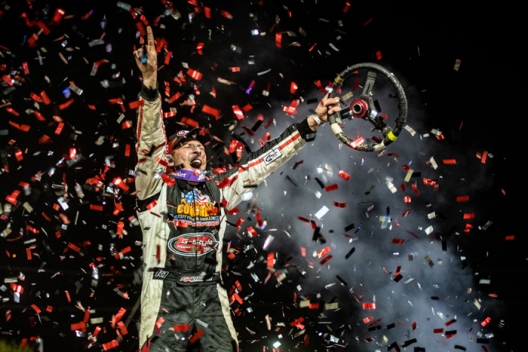 BARBERVILLE, Fla. — Running fifth late in Wednesday’s DIRTcar Nationals feature at Volusia Speedway Park, Kyle Strickler knew it was going to take a major stroke of luck for him to have a chance at winning the World of Outlaws Morton Buildings Late Model Series-sanctioned event. That’s exactly what the open-wheel ace turned emerging Late Model star got when a caution with seven laps remaining in the 40-lapper set off a series of events that would end up taking out three of the four cars in front of him.

With leader Bobby Piece of Oakwood, Ill., and top-five runners Devin Moran of Dresden, Ohio, and Brandon Overton of Evans, Ga., all running into trouble over a three-lap span, Strickler suddenly found himself in the lead ahead of fellow open-wheel modified graduate Ricky Thornton Jr. of Chandler, Ariz., and hard-charing Hudson O’Neal of Martinsville, Ind., on a restart with three laps remaining. Strickler made the most of the opportunity, turning back both Thornton and O’Neal on two restarts in the final three laps to earn his second World of Outlaws victory in three series events this season.

“Sometimes it’s better to be lucky than good,” the 37-year-old Strickler of Mooresville, N.C., said after climbing from his PCC Motorsports Longhorn Chassis in victory lane. “We were probably going to run about fourth or fifth there, but then them cautions came out. Bobby broke or had a flat. The next thing you know, we’re leading.

“Once during that race I said, ‘I ain’t gonna let that other modified driver out run me here. We’re going to the front.’ Ricky had a really good car, and on the restarts you’re a sitting duck. I was so worried at the end there.”

Strickler had no need to worry in the closing laps as he pulled away from both Thornton and O’Neal on both of the final restarts on his way to winning by 0.864 seconds over the eighth-starting O’Neal, who outdueled Thornton for second over the race’s final two circuits. Thornton, who started third and took the lead from Pierce on lap 12 before losing it back to Pierce on lap 34, settled for third with 15th-starting Jimmy Owens of Newport, Tenn., and 12th-starting Brian Shirley of Chatham, Ill., founding out the top five.

Winning on the third night of Volusia’s weeklong DIRTcar Nationals and on the first night of WoO-sanctioned action in the six-race miniseries, Stickler earned $10,000 for the second WoO victory of his career. His first  series triumph also came at Volusia on Jan. 16 in the tour’s most recent race during the second night of the tour’s season-opening Sunshine Nationals.

Strickler’s charge to victory in Wednesday’s feature was made even more surprising by his slow start to the race. Rolling off from outside of the second row, Strickler faded drastically in the race’s early going, dropping all the way to eighth on the opening lap before beginning his charge forward during the race’s middle stages.

“We took that green and I went straight backwards,” Strickler said of his slow start to the race. “I’m like, ‘Man, we have messed up. We picked the wrong tire or made the wrong adjustments or something.’ But we got in lapped traffic there and all the leaders went to the top. The car really came to us.

“This racetrack ain’t one-laned; it’s technical. I never would’ve thought I would’ve gone back to eighth then charged back to the front. Thank God for those restarts.”

Much like Strickler, O’Neal was surprised to suddenly find himself battling near the front late in the race after running seventh as late as lap 34.

“I didn’t really think I had a second-place race car. I just took advantage of some bad situations for some other guys,” said O’Neal, who earned his second podium finish in two appearances at Volusia this week. “Overall a good night. We salvaged after a bad qualifying effort and put it on the podium again. Hopefully we can advance one more spot. We’ve got a third and a second, so hopefully first is tomorrow.”

The drama that propelled the late charges by Strickler and O’Neal had the opposite effect on Thornton, who felt he could’ve won the race if not for the late cautions.

“I kind of wish those yellows didn’t come out,” said Thornton, who visited Volusia for the first time for this year’s DIRTcar Nationals. “I don’t really have that much experience here to know what I need to do on a restart. I let Bobby get by me (on the lap-33 restart) and I was kind of screwed after that and couldn’t really run the line I wanted to.”

The race was slowed by five cautions in total with the first coming when outside polesitter Tim McCreadie of Watertown, N.Y., who won Monday’s DIRTcar Nationals opener, suffered problems on the left-rear of his car after hitting a rough spot entering turn three on lap four and slowed from the second position. The second caution, which set up the late-race drama, waved with 33 laps complete when Kyle Bronson of Brandon, Fla., slowed with a shredded right-rear tire.

The tangle that eliminated Moran and Overton was the most serious accident of the race. Moran, who had just taken the second spot from Thornton, slowed exiting turn four on lap 34 directly in front of fourth-running Overton, causing a collision hard enough to lift the rear of Moran’s car into the air and leave both cars with heavy damage.

The race’s final caution was for a tangle that took out defending World of Outlaws champion Brandon Sheppard of New Berlin, Ill., and Michael Norris of Sarver, Pa. The two drivers were battling for the fifth spot when contact sent Norris spinning. Sheppard had a flat left-rear tire and had to pit. Sheppard ended up 20th and Norris was 23rd.

Notes: Strickler eared his third career national touring victory. Along with his two World of Outlaws wins at Volusia, he has a Lucas Oil Late Model Dirt Series victory that came Sept. 17 at I-80 Speedway in Greenwood, Neb. … The race took just over 32 minutes to complete and had 29 of 33 starters running at the finish with 23 of those cars running on the lead lap. … The DIRTcar Nationals has started with three different winners in three races. McCreadie won on Monday’s and Pierce won on Tuesday’s. Both were DIRTcar-sanctioned events. The six-race miniseries, which serves as the final stretch of Georgia-Florida Speedweeks, wraps up with three more World of Outlaws-sanctioned events Thursday through Saturday.

Bobby Pierce followed up his Heat 1 victory by drawing the feature’s pole position for the second consecutive night. Hot off his first career Volusia triumph on Tuesday, he will attempt to become just the second multiple feature winner in 14 Speedweeks 2021 events — joining Tyler Erb — and capture his elusive first-ever WoO A-main. … Recovering well from his hasty switch to his backup car after experiencing motor trouble during hot laps, Brandon Overton was the night’s overall fastest qualifier and finished second in Heat 1. He starts seventh in the A-main as he continues to chase his first career victor at Volusia. … Scott Bloomquist was racing inside Michael Norris for the lead on the first lap of Heat 2 when he lost the handle on his iconic No. 0 and spun to a start between turns one and two. He failed to rally for a transfer spot in the heat but late won the first B-main. … Heat 2 polesitter Jimmy Owens was penalized one row after WoO officials determined that he fired early on the initial start. He went on to finished third. … WoO regular Cade Dillard, who finished second in Volusia’s WoO season opener on Jan. 15, saw his night set back substantially when he slid to a stop off turn two on the opening lap of the fourth heat. … Ricky Weiss became well aware of how quickly a driver’s fortunes can change during the fourth heat. The Canadian burst off the outside pole to power past front-row mate Kyle Strickler for the lead on the race’s original start, but the caution flag for Dillard triggered a complete restart that turned out very differently for Weiss, who lost his momentum when Strickler moved up the track, fell to fourth and finished there to miss transferring. He came back to win the second B-main. … Back for the second straight night in the Longhorn car he drove to a WoO triumph on Jan. 16 at Volusia, Strickler appeared to return to the form that eluded him while running an XR1 Rocket car in recent weeks as he raced to victory in the fourth heat. ... The 50-lap feature will have a massive 35-car starting field; perhaps some sort of record is being set with 11 provisional starters added to the race: Cade Dillard, John Baker, Boom Briggs, David Breazeale, Ashton Winger, Chase Junghans, Parker Martin, Blake Spencer, Brent Larson, Ryan Scott and Shane Clanton.

The first of four consecutive nights of World of Outlaws Morton Buildings Late Model Series action to close the DIRTcar Nationals is being contested on an overcast, warm Wednesday (the afternoon high topped 80) with another 51-car field signed in. … New to the week’s action is Clay Harris of Jupiter, Fla., who is driving fellow Florida racer Ken Monahan’s No. 6. Monahan said he decided to bypass racing himself at Volusia because he’s “had enough” of Speedweeks competition after experiencing a struggle-filled Winternationals at East Bay Raceway Park in Gibsonton, Fla. … Teenager Trevor Gundaker of St. Charles, Mo., is making his Volusia debut as a fill-in for veteran Reid Millard of Jefferson City, Mo., who flew home to conduct a couple funerals at his family’s business. Millard plans to return to his car's seat on Friday. … Ashton Winger of Hampton, Ga., the 2020 WoO Rookie of the Year, made a motor change in his family-owned car for Wednesday’s action. Looking to find a better combination for the Volusia surface, he’s using the Clements powerplant that propelled him to his first-ever WoO victory last year at Cedar Lake Speedway in New Richmond, Wis. … Remaining winless in 13 Speedweeks events after a fourth-place run in Tuesday’s 30-lap feature, Brandon Sheppard of New Berlin, Ill., expressed frustration with his inability to take advantage of his outside pole starting spot. He said his Rocket Chassis house car was simply “too tight” for him to handle running the ornery cushion like the race’s top-three finishers Bobby Pierce of Oakwood, Ill., Devin Moran of Dresden, Ohio, and Hudson O’Neal of Martinsville, Ind. … Tuesday’s podium of Pierce, Moran and O’Neal marked the first time since since the turn of the century that a DIRTcar Nationals Dirt Late Model feature saw its top-three finishers all under the age of 30; at 26, Moran was the oldest of the trio. … Brandon Overton of Evans, Ga., experienced mechanical trouble during Wednesday’s hot laps, forcing his Wells Motorsports crew to hastily pull out their backup car for qualifying.