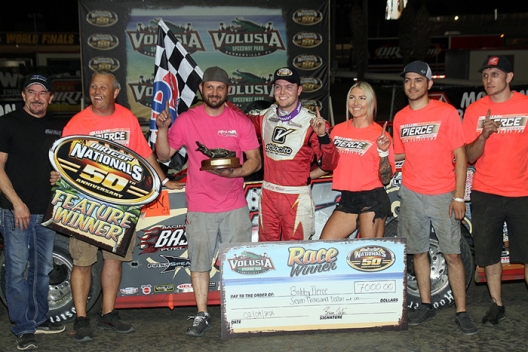 BARBERVILLE, Fla. — After his aunt's passing earlier in the day, pole-starting Bobby Pierce desperately wanted to dedicate a victory to her Tuesday at Volusia Speedway Park's 50th annual DIRTcar Nationals.

The 24-year-old Oakwood, Ill., driver didn't have a lot of time to get emotional, however, when sixth-starting Devin Moran of Dresden, Ohio, turned up the wick in the second half of the 30-lap Super Late Model feature.

Pierce used a daring crossover move with 12 laps remaining to answer Moran's turn-two slide job, then kept his 26-year-old buddy in check the rest of the way for a $7,000 victory, his first in the competitive winter racing action at the historic D-shaped track.

"Man, I was pretty nervous there. Me and Devin, we're good buddies, and that was probably the funnest race we've had," Pierce said in victory lane. "There at the end, I (saw Moran) was in second on the board, and (crew chief Cody Mallory's signalling) sticks were getting closer and closer.  Man, you know, I just kept thinking, if I'm cut out for this stuff, surely we can make 10 more laps. And luckily I did."

Pierce took the checkers eight-tenths of a second ahead of Moran for his second career Georgia-Florida Speedweeks victory. His first came in 2014 at East Bay Raceway Park in Gibsonton, Fla., and he's halfway to the Speedweeks victory total of his father Bob, who won at three Florida tracks but never Volusia.

Hudson O'Neal of Martinsville, Ind., was third while second-starting Brandon Sheppard of New Berlin, Ill., finished fourth ahead of Darrell Lanigan of Union, Ky., who rallied from his 14th starting spot.

Pierce's team was burdened with heavy hearts when they received word that 52-year-old Jenn Henk had suffered a brain aneurysm and was hospitalized near her Phoenix, Ariz., home before being removed from life support. Henk's husband, Larry Henk, owns Premier Waste Services and is Pierce's primary sponsor for his familiar red No. 32 car. Larry is a cousin to Bob Pierce, but Bobby always called the Henks his aunt and uncle.

Pierce described Jennifer Felix Henk "one of the most kindest souls you'll meet. She'd do anything for you. You had to love her personality. I feel so bad for Larry, you know.

"I know he loved her and I know he's watching, so a big shoutout to him. We talked about it and it's just crazy to think we could actually go out here and get the win for her. I think she was probably helping us out."

Pierce officially led all 30 laps, but he definitely needed a little divine intervention when Moran dove underneath him in turn two, sliding up just high enough for Pierce to dive right back underneath and regain the point heading down the backstretch.

"l don't know how I pulled off that crossover (move) in the slick. I timed it just right and I think I about took his left-front off making that crossover work," Pierce said. "I don't know if he had to lift or what, but like I said, that's probably the funnest race me and him have had.

"I knew for sure he was wanting that win. I heard him down the frontstretch under me and going into that corner I knew possibly was coming, so I kind of set it up in a way just in case someone was there — and he was. It's just one of those deals. You can hit that one time out of 10 just to do it right. When you (drive) across that slick you're normally dead. Just a crazy night. It's been a long day for sure."

The high-running Moran, who had visited Volusia to spectate before Feb. 8-13's Late Model week, did his best to mimic what he'd seen his open-wheel brethren do at Volusia.

"The reason why I came to watch these sprint cars, I want to do it like they do," he said. Our Longhorn has been really good. I just had it free enough to where we could get that high, but high enough where I could turn down off of it."

Moran was within three-tenths of a second of Pierce with three laps remaining, but he couldn't summon a final charge.

"I messed up (exiting) four there," he said. "I was trying to get as close as I could, that way I could just try a slider. It was just so slick down off (the corner). But all in all, congrats to Bobby. Neither of us have ran great down here, and he's doing really good and obviously our Tye Twarog Racing Longhorn's been really good. Hopefully we can hit the pill draw tomorrow (and be) a little bit better."

O'Neal, who held the second spot for nine laps before giving it up to Moran, secured a podium finish after skipping Monday's action when Tim McCreadie grabbed a victory.

"Overall, it was a really good night. I felt like we were a little bit better than what we showed there. We just didn't take full advantage of it," O'Neal said. "We'll carry on over for tomorrow. It was a good first night (for the team). We've got a long week here and hopefully we can keep the speed rolling."

The 30-lapper was slowed by four cautions, none for serious incidents. The first start was called back and 15th-running Tyler Bruening slowed for a lap-four yellow while leaking fluids. Josh Richards drew a lap-nine caution when he slowed while running 11th after losing an air cleaner and the final yellow appeared on lap 22 when Brian Shirley's ride came up lame.

Notes: The top three finishers had an average age of 23.3 and it was the first podium at Volusia this century with everyone 30 or under. ... Fourteen of 26 starters completed 30 laps and 17 were running at the finish. ... Stewart Friesen of Sprakers, N.Y., who entered four Super Late Model Speedweeks events in recent weeks, dominated Tuesday's Super DIRTcar Series victory for big-block modifieds before Pierce's victory.

Tuesday’s high temperature neared 80 degrees as the DIRTcar big-block modifieds have joined the DIRTcar-sanctioned Late Models for the second night of the DIRTcar Nationals. … The Late Model car count numbers 51. … Not racing tonight after registering for Monday’s opener are Mike Maresca of Potsdam, N.Y., who is concentrating on his big-block modified effort; UMP modified standout Nick Allen of Wheatfield, Ind., whose plan to try out Kyle Strickler’s PCC Motorsports XR1 Rocket car Monday never materialized because he found he was too tall to safely sit in the machine’s cockpit; and WoO rookie hopeful Ryan Scott of Garland, Pa. … Joining Tuesday’s field are Hudson O’Neal of Martinsville, Ind., who sat out Monday’s action; Kyle Strickler of Mooresville, N.C., who is back in the Longhorn car he drove to a WoO victory last month at Volusia — a machine he’s now racing under the PCC Motorsports banner — after sitting out Monday’s show to run his UMP modified; and Spencer Hughes of Meridian, Miss., who shifts to full-fender competition after competing in the UMP modified class. … WoO regular Cade Dillard of Robeline, La., was unable to log a qualifying lap Monday due to a problem with his car’s fuel-cell pickup tube that was apparently an unseen residual effect of the crash he was involved in during Jan. 16’s WoO Sunshine Nationals finale at Volusia. He recovered to qualify through a B-main and finished 15th in the feature. … Dillard is receiving pit-area assistance this week from not only his MB Customs chassis builder, Jimmy Mars of Menomonie, Wis., but also his teenage sons Sam, 16, and Taylor, 13. “Cade’s never had so much help,” Mars cracked with a smile. … WoO rookie hopeful Tony Jackson Jr. of Lebanon, Mo., scratched from further action on Monday after breaking a driveshaft on his second lap of time trials. … After a fifth-place finish on Monday, Bobby Pierce of Oakwood, Ill., appears to be considering remaining at Volusia for the entire week rather than heading home as he had planned following Wednesday’s program. He’s racing with a heavy heart this evening, however, after learning that his aunt, Jen Henk, who with her husband Larry own the Premier Waste Services company that is Pierce’s primary sponsor, suffered a serious brain aneurysm and is hospitalized in Phoenix, Ariz. … Reid Millard of Jefferson City, Mo., reported that he’ll turn over the driver’s seat of his No. 14 to teenager Trevor Gundaker of St. Charles, Mo., on Wednesday and Thursday. Millard, who sponsors Gundaker, said he has to fly back to Missouri for two days to oversee a couple funerals at his family business.