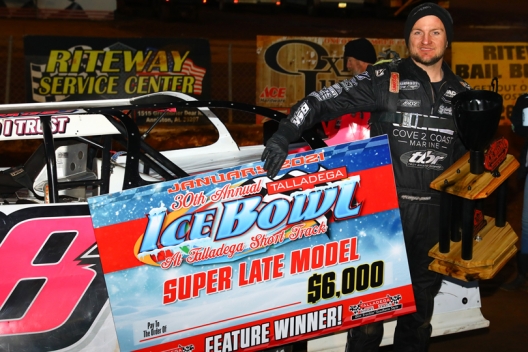 EASTABOGA, Ala. — It figures that a driver capable of winning an unprecedented five consecutive Ice Bowl features at Talladega Short Track was steering a fantastic race car.

"I really didn't have a good car," Page admitted in victory lane after continuing his dominance of Alabama's winter classic.

Nevertheless, the Douglasville, Ga., took advantage of fellow front-row starter Sam Seawright's ill-advised groove switch on the 21st lap and led the rest of the 50-lap main event at the third-mile oval across the highway from one of NASCAR's showplaces.

Page had a hard time wrapping his head around his remarkable five-in-a-row streak — "I can't believe it. It's crazy. It just don't happen" — in taking the checkers 0.709 seconds ahead of Seawright. Hometown driver Dallas Cooper, who held the second spot for 14 laps midrace, was third with Randy Weaver of Crossville, Tenn., and Dillon Tidmore of Southside, Ala., rounding out the top five.

With rubber laid down on the daytime racing surface, most drivers stuck with the low groove, including Rainsville, Ala.'s Seawright early as he got the jump on the polesitting Page and led the early laps. But when Seawright decided to move to the high groove exiting turn four on the 21st lap amid traffic, Page pounced and  took a lead he'd never give up.

Page didn't feel like he had the best car, but he took advantage.

"I really didn't have a good car. I (chose) the wrong right-front (tire) and wouldn't think about turning. Sam had the car to win," Page said. "He messed up getting into (turn) three because I was about to shoot to the top and try it, and he thought he better go, but it just wasn't the right time to go."

Seawright, who started on the front row with Page at the Ice Bowl for the second straight season, knew he blew a chance to earn his biggest career victory.

"We had a really good car. It's just, Michael Page is so experience in lapped traffic, and it showed today. I feel like we had the best car here, but through lapped traffic I chose to go to the top and really should've just rode in the bottom in that rubber," Seawright said. "I got by some lapped cars early on the top, so I just figured I could go back up there for one lap and get one or two (lapped) cars back in between us and kind of ride for a while. ... I'm glad I ran second to Michael, but I wish we could've won. It just sucks I missed the rubber like that."

Seawright lost the second spot to Cooper before regaining it on a lap-34 restart, and while he closed in on Page in the race's late stages, he couldn't find an opening. He knew the race was decided on lap 21.

"They can close up on you a half-second before you even know what you done wrong," he said.

Page struggled with his car's handling the entire race in keeping Seawright in check.

"It really didn't get no better," Page said. "I just had to get my brakes and get it turned just right. You might as well not turn the wheel — it was pretty bad. I was able just to do what I could in the car to make it the best (as possible)."

Besides three failed attempts to start the race, the 50-lapper's only other slowdowns came on lap 34 with three cautions. Chad Thrash got hung up on the inside wall in turn two, fifth-starting Todd Morrow spun in turn two on the ensuing restart and then three drivers (Matthew Brocato, Ahnna Parkhurst and Houston Spurlock) spun on yet another restart.

Notes: Page took a reverse victory lap carrying the checkered flag before he was showered with ice out of the traditional Ice Bowl trophy in victory lane. ... He dedicated his victory to a crew member. "I had a good friend who's always here with me, and his dad died today," Page said, "and it's for him, too." ... Christian Hanger of Winchester, Tenn., was running seventh on lap 34 when he retired right right-rear suspension issues. ... Nine drivers finished on the lead lap and 14 of 24 starters were running at the finish. ... Former winner David Brannon of Elora, Tenn., started 12th and finished seventh.

There was no surprise at the top of the leaderboard following Saturday’s round of qualifying for Sunday’s 30th annual Ice Bowl. Four-time and defending Ice Bowl winner Michael Page of Douglasville, Ga., picked up where he left off last year, stopping the clock at 14.224 seconds to set the overall fast time among 32 entrants.

During group qualifying — with four cars on track at a time — Page was among the first four to hit the track on Saturday. Getting progressively faster with each lap, it was his fourth and final circuit around the third-mile, red clay oval that set the benchmark, earning Page the coveted pole position of his heat alongside Chris Jones of Alabaster, Ala., who turned a lap of 14.554 seconds.

Others grabbing the pole starting position for their respective heats were Dallas Cooper of Talladega, whose time was 14.902 in the second group; Sam Seawright of Rainsville, Ala., who went a 14.363-second lap in the third group; and veteran Randy Weaver of Crossville, Tenn., whose time of 14.579 seconds topped the fourth group.

Last year’s overall fast qualifier and TST track record holder Jason Hiett of Oxford, Ala., put down a 14.694 mark, but that was only good enough for fifth in the third group. In 2020, Hiett was the only driver who managed to crack the sub-15-second mark. On Saturday, however, 18 of the 32 drivers managed to dip into the 14-second bracket, including seven of the eight competitors in a very tight third group.