Talladega's most prolific Ice Bowler sits one out 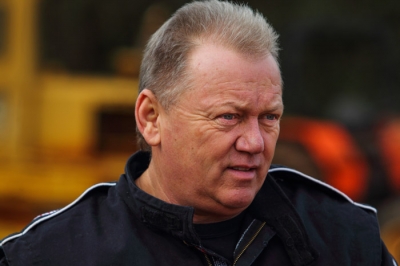 No driver has started more Ice Bowl feature races at Talladega Short Track than Tim Roszell, who has been in the lineup 21 times in 29 events. But after qualifying for the last 13 straight, the 2015 event winner and native of nearby Coldwater, Ala., will be little more than a spectator during the 30th annual event as he has decided to sit this one out. | Watch on FloRacing

Roszell, 60, said a number of factors contributed to his decision to skip this year’s race. Chief among them was the cost vs. reward, while he also had to consider competing without his crew chief Billy Basnett, who recently underwent gall bladder surgery.

“A couple things played into it, but mainly, I just have to weigh my options,” Roszell said. “I own my own business and me and my son … just about everything that goes into my race car comes out of there and I just have to weigh my options on how much the chance of winning money is versus what you’re gonna spend and this is a very expensive race to go to. And my crew chief had surgery just a month or so ago. That kinda had a little bit to do with the deal. I could have went without him, but he really does everything on the car, so I just didn’t want to go without him. Plus, (the uncertainty of) the weather.”

“I didn’t win a race this year, but we were real competitive,” Roszell said. “We had some seconds and thirds. Man it’s really tough. I think this is No. 7 on the Super championship and then I won four or five more in the lower classes. My first Super Late Model championship was in ’96 and I had to battle with Danny (Peoples) every week. He was the one to beat to win the championship. He probably come in second that year, but he probably won more (features) than I did, I don’t know. He’s a very good race car driver.”

Roszell’s 21 Ice Bowl appearances is a remarkable feat. His 13 straight features in his home track’s signature event is perhaps just as impressive. Since that first Ice Bowl start in ’97, Roszell has witnessed a number of major transitions at the track just down the street from Talladega Superspeedway. To put it into perspective, he’s the only active driver remaining from the 24-car starting field in that 1997 race.

The drivers who made competing at Talladega Short Track so difficult on outsiders back in the day — Alabama natives like Talladega’s Ross Martin, Oxford’s Terry Smith and James Cline, Munford’s Ted Lackey and Margaret’s Peoples, an 11-time track champion — have faded into the track’s lore, giving way to a new generation of stars like Michael Page of Douglasville, Ga., Jason Hiett of Oxford, Ala., and Dallas Cooper of Talladega.

Page, this year’s Ice Bowl polesitter, chases an unprecedented fifth consecutive Ice Bowl victory on Sunday; Hiett, who has six top-five finishes in the event, is making his 10th consecutive start; and Cooper, the 2019 TST champion, is making his sixth straight Ice Bowl start. While Page is perhaps the exception as he’s been nothing short of spectacular in six Ice Bowl features, all remaining challengers have a ways to go to catch up to the old guard.

Peoples, whose last Ice Bowl start was in 2011, won the race twice while making 14 feature appearances. Martin, the 2013 Ice Bowl winner, made the first of 17 starts in the event in 1994. He finished in the top seven five times. Smith made 13 starts, including nine in a row from 2005-’13. But after finishing third in 1994, he never managed to improve that finish. Lackey was the fast qualifier in the inaugural Ice Bowl in 1991, while finishing fourth in the main event that year. He made 11 career starts in the race, with his runner-up finish behind Hall of Famer Dale McDowell in 1994 his best result.

“They were definitely tough to race against that’s for sure,” said Roszell. “To me it was more driving (ability) back then. Now with the shock package, everybody is more equal now on the racetrack when used to, it was a little bit harder. You had to slow down to get faster and the smaller engines were competitive. Now, if you’re not running a $50,000 or $60,000 motor, it’s hard to keep up with those guys. It’s kinda gotten out of hand. There again, they changed the track in the favor of that motor. I don’t know if it was on purpose or not, but it’s just in the favor of a bigger motor. I’ve really had to learn how to drive a different style in the last couple years to keep up.”

Roszell finished sixth in each of his first two Ice Bowls (1997-’98), but it was a decade later before he finally managed to record a podium finish. To prove how difficult Talladega’s January race can be, Roszell had to wait seven more years before he finally reached victory lane.

“The year that I won, everything just fell into place just perfect. Every lap we made was perfect,” he recalled. “You know, it seemed real easy that year. The next year, I sat on the outside pole and we run the same compound tire and everything. Everything should have been the same and before the race was over, I was in about 12th place. You just never know.

“It’s all a setup game nowadays and it’s a motor game too. The track’s changed a lot in the last several years. They really got it kinda leaning toward the big motors like most tracks are. Used to, it was an equalizer track where you could run anything and be competitive and now … well, it’s just a little different. Of course the shock packages cause a little bit of that. It’s really, really tough. It’s tough to get in the race, let alone have a shot at winning it.

As tough as it is to win the race, and considering talented locals like Smith, Lackey and Cline never managed to do so, Roszell said he’s been most surprised over the years by the upstarts who have slipped into TST and escaped with a win. Unheralded drivers Joel Rice of Cashiers, N.C. in 2006, Billy Mayo of Cleveland, Tenn., in ’07 and Bobby Mayse of Harrison, Tenn., in ’08 were winners during a three-year stretch sandwiched between victories by national stars Shane Clanton in 2005 and Ray Cook in 2009.

“I remember them big guys would come down here and they couldn’t touch the ground. They’d have too much motor and we would run good with a 358 (c.i. engine), just a little small motor, a $5,000 motor. Or the year I won we won with a CT525 engine and the car was dominant all day. But now, a 525 won’t hardly keep up at Talladega. If you go back and look at the videos from like 1993 or something like that, the cars were spinning out. They couldn’t even get a green flag lap in because the track was so slick.”

The end of Roszell’s 13-year streak leaves Hiett with the longest active streak of consecutive Ice Bowl starts, a streak that will reach 10 when he takes the green flagSunday. Hiett, slated to start 14th, has a long way to go, however, if he hopes to add a seventh top-five finish. Only once in his previous nine starts has Hiett improved more than four positions during the 50-lap main event. He rallied from 15th to fourth in 2013 and will need a similar effort on Sunday. With one of the event’s most consistent drivers over the last decade starting back in the back, Roszell said Page is in great shape for a fifth Ice Bowl win.

“The year that I won, everything just fell into place just perfect. Every lap we made was perfect. ... The next year, I sat on the outside pole and we run the same compound tire and everything. Everything should have been the same and before the race was over, I was in about 12th place. You just never know.”