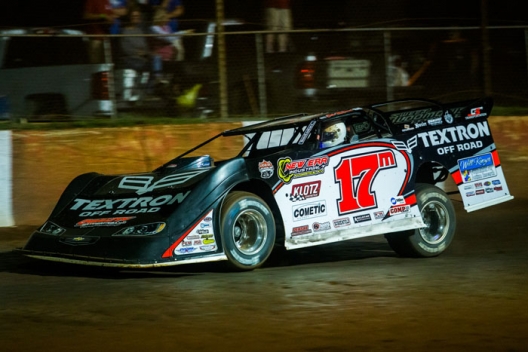 WOODSTOCK, Ga. — Dale McDowell has tamed just about every surface that Dixie Speedway has had to offer while winning multiple Dixie Shootouts. From hooked up around the topside, like his 2016 Dixie Shootout victory, to elbows up on a rugged track, like his Shootout win back in ’01, McDowell has mastered them all.

Realistically though, the veteran driver from Chickamauga, Ga., is much more suited to a track that is fast and smooth from the middle down. Unfortunately for his competitors on Saturday, fast and smooth it was. Dominating action at the 3/8-mile oval in the Atlanta suburbs, McDowell raced to his fourth career Dixie Shootout triumph, a victory that was arguably one of the easiest in an event he first won in 1999.

Leading every lap from the pole, McDowell caught a timely caution near the halfway mark of the 50-lapper, allowing him to steer clear of traffic on his way to winning the Lucas Oil Dirt Late Model Series-sanctioned main event ahead Jonathan Davenport of Blairsville, Ga. Josh Richards of Shinnston, W.Va., finished third, while 11th-starting Brandon Overton of Evans, Ga., and eighth-starting Tim McCreadie of Watertown, N.Y., completed the top five.

“We drew early and I think that helped us,” said McDowell. “And starting up front helped us.”

On a track with passing at a premium after halfway, McDowell’s prime starting position was indeed key. He jumped to an early lead and never gave it up on his way to a $12,000 payday. Davenport and Richards managed to get by second-starting Tyler Millwood of Kingston, Ga., quickly, but could do little else as McDowell drove away.

Davenport slipped by Richards for the runner-up spot on lap 18 and as McDowell caught the back of the field, the series points leader began to narrow the gap. The race’s lone caution gave McDowell a reprieve on lap 25, however.

“It did. It let me get clean air,” said McDowell. “I never did think I’d see the day when air was (so) important in (dirt Late Model racing). You hear about it (in NASCAR racing) on Sundays, but clean air (is important). I got loose in dirty air behind ‘em and I’m sure those guys did a little bit too. When you’re sitting out front, you’re just a sitting duck. Those guys are gonna go where you aren’t, so it just worked out. Thank the good Lord for a good safe race tonight. It was just meant for us to be here.”

McDowell said that as his advantage slimmed, he was consigned to change his line a bit to keep the charging Davenport at bay.

“I figured he was on the top side, so I was asking (brother and car owner) Shane (McDowell),” the Hall of Fame driver said. “Shane was giving me signals down there ‘cause (Davenport) looked really good in his heat race. I figured he was on the top side and figured Josh was in the middle, so I just had to kinda get greedy and cover ground throughout up there to keep the lead. Those guys are tough each and every week, so that makes it special to win one of these things.”

Davenport was hardly decisive when considering the mid-race caution, though he offered that it likely hurt his chances at getting by McDowell.

“I really don’t know. I probably (didn’t want the caution) because feel like we was pretty good in lapped traffic,” Davenport said. “We was pretty maneuverable there and that’s how we got by Josh (Richards). I don’t know. The track was cleaning up in a hurry. I just wish we had a little more racetrack left.

“Congratulations to Dale there. They had some bad luck last night (at Tri-County Racetrack in Brasstown, N.C.) and had one taken from them and I didn’t figure that was gonna happen again. He was gonna have to really mess us.”

Richards was close enough if either of the top two drivers had a misstep, but the opportunity never presented itself.

“We had a really good car,” said Richards. “I have to thank Clint Smith for helping me out and giving me some pointers. We struggled a lot (at Dixie) last year, had some things goofed up on the car. We hot lapped good, qualified good and that got us up front. We had a pretty good car in the feature, just needed to fine tune a little bit. Toward the end we were just trying to ride and save the right rear tire there.”

Notes: McDowell finished .646 seconds ahead of Davenport, while winning his ninth career Lucas Oil Series race and first since his Dixie Shootout victory on Oct. 1, 2016. ... He has eight wins on the season, with seven paying at least $10,000 to win. … Davenport, who grew up about 90 miles from Dixie Speedway in Blairsville, Ga., said his runner-up finish was a career best at the track. “I think this is the best I’ve ever ran here,” he said. “I was just telling Josh. I live an hour and a half from here where I grew up and I hardly ever come down here to race any. But (I’m) starting to figure it out.” … Twenty-four of the 26 starters finished the race, with 22 completing all 50 laps. … Brandon Overton rallied from 11th to finish in fourth. ... Sixth-time Dixie Shootout winner Scott Bloomquist struggled to a 14th-place finish. … Fifteenth-starting Donald McIntosh was the first to retire after completing only one lap. … Series rookie contenders Mason Zeigler and Kyle Bronson failed to transfer to the feature. … 2017 Dixie Shootout winner Michael Page of Douglasville, Ga., was among those who failed to qualify. … Chasing his second Lucas Oil Series championship, Davenport increased his series lead to 225 points over Richards and 410 over Bloomquist. “We’re looking at (the) big picture now,” said Davenport. “This is one step forward to our ultimate goal and maybe we can go these three, four races and pull this off.”