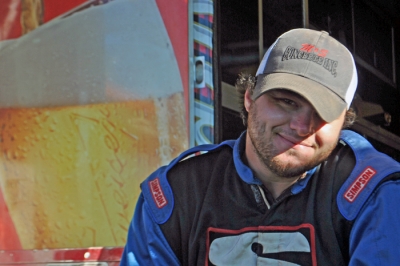 CONCORD, N.C. (Oct. 20) — Brandon Overton did not take the usual steps a driver would to rise up to the top level of dirt racing. Rather, the World of Outlaws Craftsman Late Model Series regular took an unorthodox approach, first wheeling a Super Late Model before stepping down into the lower-horsepower Crate Late Model class to gain experience on a smaller budget.

These days, at the age of 25, Evans, Ga.’s Overton focuses on Super Late Model competition and is emerging as one of the country’s top talents, chasing the World of Outlaws Craftsman Late Model Series for the second consecutive year and breaking through earlier this year for his first career win on the national tour in a Firecracker 100 preliminary feature at Lernerville Speedway in Sarver, Pa. But he still jumps into a Crate Late Model when he gets the chance.

This weekend Overton is doing just that, returning to the Crate ranks to compete in the OneDirt World Short Track Championship at The Dirt Track at Charlotte. He is using the $4,000-to-win Crate Late Model portion of the weekend — which kicked off Thursday night with over 300 cars spread across nine divisions practicing in advance of Friday night’s qualifying and Saturday evening’s feature action — as track time before the Oct. 27-29 Bad Boy Off Road World of Outlaws World Finals at the 4/10-mile oval.

Moonlighting in the Crate Late Model division this weekend brings Overton back to a realm where he made great strides toward his current status as a Super Late Model rising star.

Before crate-engine racing took off, Overton began his racing career in low-cost Hobby Stocks at tracks near his home. After some three years in the class, Overton jumped right into 800 horsepower Super Late Models when he was 12 years old.

Overton enjoyed early success racing family-owned equipment, but the expenses of Super Late Model competition grew “unfeasible,” he said. Enduring the usual breaks and malfunctions any driver would with their car, Overton and his family were faced with sky-rocketing prices — mainly the $40,000 bill for each motor he blew.

With a lack of third-party support, Overton was forced to revert to the Crate class. The Crate Late Models were almost identical in spec to Supers except for the motors, which ranged from 400-500 horsepower and were far cheaper. It was an opportunity he had to take, and he made very good use of his two years in Crates.

Remembering one Crate Late Model race at Albany Motor Speedway, just down the road from his hometown, Overton laughed. He ran a Crate car in a mix of Supers, and drivers heckled Overton, saying, “Man, there’s no way you’re going to keep up. We’re going to be way past you on the track.”

But Overton clocked top-five in qualifying that night, which set him up to prove those drivers wrong. In the feature Overton wrecked early and was sent to the tail after he and his crew made the necessary repairs, but he rallied to win the program’s main event.

“It goes to show you that you have 400 horsepower less than a Super but those things are still pretty fast,” Overton said. “People sometimes think Crate racing sucks, but I love them. I have been in the position where I didn’t have enough money to run Super and all I could run was a Crate car. It’s still racing. You still have your guys to beat. There are a lot of guys who run Crate cars and if they had the money (to go Super Late Model racing) they’d surprise you.”

One of the biggest misconceptions in Dirt Late Model racing is that the Super class is supreme over Crates, Overton said. He said a Crate machine is still a four-bar Late Model with the same interior components, albeit with just a smaller power plant. Like the drivers, though, he said fans prefer the “Supers screaming by,” instead of the quieter Crates, and jump to conclusions.

“I’ve been on both sides, but since then I’ve been fortunate enough to have enough people behind me to do the Super deal,” said Overton. “Now, I feel the more I go out there and make laps (with Crates), I can see how the track changes and what everything does.”

And racing a Crate this weekend at Charlotte gives him a head start on his assault on the track for next week’s WoO season finale.

“I’ll have a better idea on what I need to do when I get to racing World Finals, you know?” Overton said.

For the OneDirt World Short Track Championship, Overton is driving the No. 75 car owned by Wesley Page. Page, a longtime friend of Overton, agreed to give Overton the ride in return for access to his knowledge about Supers. Page had an asphalt background before turning to dirt racing and purchased the Crate car to learn more about competing on clay.

“I didn’t have anyone driving my car (at Charlotte),” said Page, the owner and operator of WP Racing Shocks in Rock Hill, S.C. “I was going to ask him, and it just fell into place.

“The Super competition is top-notch, but these days Crates are pretty competitive as well. He’s one of the better up-and-coming drivers I’ve had the chance to work with. He just wants it really bad. He makes a lot of sacrifices I don’t think a lot of people realize to be able to race. I just want to help as much as I can.”

Overton did not plan on competing this weekend, but it happened organically. Overton’s brother and crew member urged him to run, knowing it would be a valuable precursor to World Finals.

“My public relations guy — my little brother — has a mouth from the South,” Overton said with a laugh. “He went and asked, then came back and told me I was running the week before World Finals. So, I’m racing.”

If not for family, sponsors and friends lending a hand, Overton claims he would not have gotten this far in the sport. Page had been helping him with his Super Late Model, and he sees Overton running his car as a passageway into the Supers.

“You may see us dabbling into the Super stuff next year,” Page said. “I would say there’s a good chance Brandon would drive it a time or two and help us evaluate it. Brandon, his brother and the rest of his crew work their butts off at the track. They have a great work ethic.”

Overton hopes to use what he learns this weekend at Charlotte to his advantage come the World Finals, during which he’ll try to clinch a fourth-place finish in the WoO points standings one year after placing 10th en route to capturing the circuit’s rookie of the year title.

“We don’t get to race Charlotte but twice a year,” said Overton, whose Billy Moyer Victory Race Car Super Late Models are fielded by Doug and Cathy Varnadore. “If you go over there with your car and you’re tight, and if the track is pretty much the same next week, you can pretty much bet (on similar adjustments). There’s not a big difference between Crate cars and Super cars, and as far as driving them, it’s not that big of a deal.”