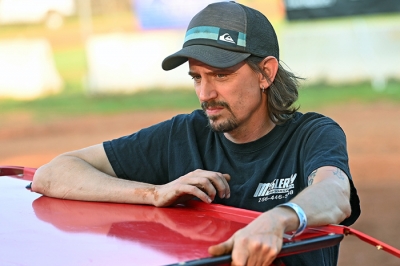 Jason Markewitz of Killen, Ala., has claimed three victories in 2021 Crate Racin’ USA Weekly Racing Series competition, and has been steadily hovering in the top 10 in the 604 Late Model points standings for much of the season. That’s no small feat considering 545 different drivers have thus far competed in at least one race while attempting to accumulate points toward a $10,000 series championship.

As temperatures steadily rose in early May, Markewitz secured his first victory of the season in his Mark Dowdy-fielded ride, taking the checkered flag at Columbus (Miss.) Speedway after the venerable oval joined Crate Racin' USA sanctioning.

He posted another victory in his Domination Race Car at the high-banked oval a little over a month later on July 10, and then added his third victory of the season Aug. 14 at Clarksville (Tenn.) Speedway, registering that one as the dreaded dog days of summer infiltrated pit areas across the region.

Markewitz has posted 19 top-five and 20 top-10 finishes in 32 starts through the organization’s Sept. 17-19 weekend, and occasionally flirted with a potential top-five finish in the national points standings for the division. Whether the team reaches that goal or not, it’s been a memorable season for a group that competes without a major sponsorship, and the memories have been established.

The team’s season-long consistency has been notable, and his grinding determination has been typically undeterred for a guy who has raced for nearly three decades. Perhaps no race showed more of a never-give-up effort than his gritty performance Aug. 21 in a feature event at Jackson (Miss.) Motor Speedway, when Markewitz finished fifth behind race winner Cliff Williams, Randall Beckwith, Matthew Brocato and Joshua Thomas.

To ensure that top-five performance, Markewitz had to endure a difficult night in the cockpit, and he’ll likely remember the night as one of the hottest of his entire career after battling blazing temperatures in the cockpit. Slight contact earlier in the feature caused his exhaust header to get pushed into the car’s interior, where the hot exhaust blew directly toward his driver’s seat.

“It was pretty brutal, but we were racing six hours from home and didn’t want to quit, and I just kept pushing the limits,” Markewitz said. “It actually burned my firesuit, and melted my gloves. At the end of the race, they were sticking to the steering wheel.”

The incident wasn't met with much postrace approval from his understandably-worried wife Melissa after the race had ended, especially when she realized what her husband, who owns and operates Markewitz Motorsports, willingly endured to post a top-five finish.

“She wasn’t too happy that we didn’t pull the car into the pits considering what was happening,” Markewitz said, smiling. “I guess I just didn’t want to quit. Mark (Dowdy) called me Sunday morning after the race to see if I was OK, and I told him no because my wife had been yelling at me all the way home, and I hadn’t had no sleep.”

If there was a night that underlined his dogged determination during the season, this was definitely the one. Fortunately, Markewitz suffered no serious burns, managing the discomfort. It wasn’t easy.

“That header was blowing hot air directly on my left thigh,” Markewitz said. “It was miserable, but we were racing six hours from home, and I’m out there not wanting to give up. It got so hot, it felt like the car was on fire. It was unbelievable. I’ve raced for 27 years, and never experienced anything like that in my whole career.”