Tough season on, off track for Knowles 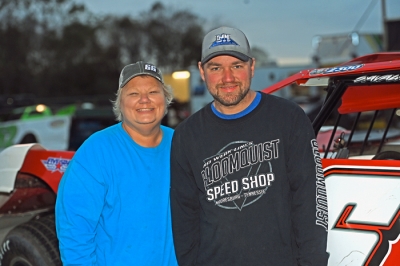 NORMAN PARK, Ga. — Jake Knowles of Rome, Ga., has been chasing a championship for most of the season on the Newsome Raceway Parts-sponsored Crate Racin’ USA Dirt Late Model Series, and entered the season-ending, Nutrien Ag Solutions-sponsored Early Bird 50 at Needmore Speedway among title contenders.

All season long, his mother Cindy Dalton Knowles has been involved with a far more important battle in her life after a breast cancer diagnosis almost a year ago dramatically changed her world. She recently received good news regarding her season-long struggle.

His father Wade Knowles, who was inducted into the Dirt Late Model Hall of Fame in mid-summer, was a standout competitor for years from a home base in Tyrone, Ga., and traveled the nation’s highways competing in major Super Late Model events in the 1980s and '90s, including the Hav-A-Tampa Series initiated by the Swims family of Dixie Speedway fame. The couple have practically been around the world in their racing endeavors, and for them the sport is a lifestyle.

Cindy is a well-known personality in the pits no matter what track she visits, and has always been a staunch supporter of her husband and son’s efforts in the sport. The family is a tight-knit group that lives and breathes racing, and gets it done without benefit of huge financial backing. They’re the epitome of the smaller, never-give-up teams in the sport, and there’s no doubt the 2021 season has tested their mettle and commitment not only to the sport, but to each other.

Less than a week after Cindy’s breast cancer diagnosis, her and Wade’s house caught fire, forcing the couple into living in a small travel-trailer in the yard of their damaged home for nearly a year until repairs were complete. It was a one-two punch that might have broken the average family, but these folks are far from average.

Armed with a positive public attitude and a rallying cry among friends and family that “#CFKWillWin,” the long journey began and almost a year later, she sent a video and photo to her son of her ringing the cancer-free bell at her doctor’s office. A few days later, the couple started the process of moving back into their now-repaired home.

“Probably the best text I’ve ever received in my life,” Jake Knowles wrote in a touching message on his Facebook account, while sharing the video and photo with the family’s many friends in the sport. Indeed, it was many of those people in the industry who were there to mentally help the family cope with their struggles.

“Oh man ... you never know how that stuff is gonna go when you get news about having cancer like she received,” Jake Knowles said. “It was really a tough deal, but all of the people in racing who know us kept her in good spirits. When she felt good enough to go to the races, seeing all the people and talking to people was a big boost. We’ve done this racing a long time as a family, and it’s such an important part of all of our lives.”

Earlier this season, Knowles’s team had arranged to have a special wrap done as a tribute to his mother’s battle, and debuted the pink and white colors in an event held Oct. 1-2 at Talladega Short Track in Eastaboga, Ala. The car was dressed as a heartfelt tribute to his mom, and was also meant to bring more awareness to breast cancer.

The new wrap was hidden under a tarp until that night when team members unveiled it prior to the start of the evening’s activities. They waited until Cindy arrived at the racetrack, and that marked the first time she’d seen the new colors.

“It was a complete surprise,” she said after the car was unveiled. “Nobody knew except Wade, and he never said a word. I was over a couple pit stalls talking to (competitor) Jimmy Elliott when they uncovered the car. That’s when I saw it for the first time. Jake has always been a really thoughtful child, even when he was a little kid. Even now, he’ll call my mother once a week, and they’ll talk for an hour on the phone. Family is very important to him.”

The new wrap produced — of course — a few tears. It was a touching moment, and Knowles left the colors on his car until the cancer-free diagnosis was announced recently, returning to his traditional red and white color scheme in the touring circuit’s most recent event held Nov. 6 at Magnolia Motor Speedway in Columbus, Miss.

“We came out with the wrap a couple days before the races, and just kept it a secret until race night,” Knowles said. “That was done at the start of October, which is Breast Cancer Awareness Month. Anthony Sanders with Big A’s Custom Graphics designed it for us. It was a pretty special deal. I think we all cried a little bit that night.”

An agonizingly difficult period has ended for the Knowles family. There will be periodic checkups for Cindy to make sure the cancer does not return, but the family continues to race. Jake Knowles has a small but mathematical chance to capture the CRUSA title in Saturday's tour finale with Jason Welshan leading Jimmy Thomas by six points as the top two contenders.

“My mom is 100 percent cancer free, and oh man ... I can’t even say how much that means,” Jake Knowles said. “Something like that happening changes everything, ya know? I’m not gonna say it affected our racing because when you get in a race car, you just zone out and go do your thing out there, but it’s definitely a relief for all of us to get some good news for a change. It’s been a tough year on everybody.”