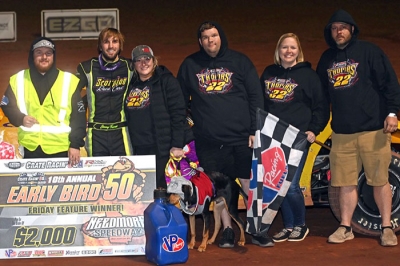 Six points. That’s not much.

It’s the minuscule amount that currently separates standings leader Jason Welshan from closest challenger Jimmy Thomas in a hotly contested war for the 2021 tour championship. Thomas, who claimed victory in a $2,000-to-win event last night to close the margin on Welshan from its previous level of 22 markers, called it “one helluva points battle ... a big-time points battle.”

All season long it’s been a four-driver scramble for most of the 20 events completed thus far among Welshan, Thomas, Jake Knowles and Tanner Collins, and it has boiled down to a mostly two-driver showdown with a single event remaining.

With Knowles 44 points behind in third, it would take a minor miracle — and trouble for Welshan and Thomas — but he's not giving up.

“We gained a few on ‘em tonight,” Knowles said right after finishing fourth in Friday's 25-lapper at the 4/10-mile oval. “I ain’t really thought about it too much, because we’re in a position where we have a pretty slim outside chance, so we’ve really got nothing to lose. Both of those guys ahead of us have a lot to lose, and they might have to concentrate on those points a lot more than us. We’re just coming back here (Saturday) for the $10,000-to-win Early Bird, and we’re gonna be going for it.”

Knowles might have a pretty good seat to watch the leading pair settle their championship bout. Nobody knows when the knockout punch will be delivered, but everyone has a feeling it’ll likely be a dramatic conclusion. Way back in August, Welshan predicted it might come down to the wire with a situation in the final race that whoever wins the last event will win the championship. It’s now a distinct possibility.

“I don’t think none of the four of us involved in this deal ever thought winning this championship was gonna be easy, and if you did then you’d be a fool,” Welshan said. “It is what it is at this point of the season. Jimmy is good down here at this place, and (Friday) we unloaded with the car too tight and got ourselves in a mess. We had to start 16th in the feature and my goal was to get inside the top 10 since it was only a 25-lapper, and I was counting ‘em off as I was passing ‘em.

"I’ll admit that I kept an eye on Jimmy the whole race. The No. 22 and the No. 01 will be racing each other in the final event, and I’m gonna be honest and say the points will definitely be on my mind. I’d think they’ve gotta be on his mind, too.”

Thomas has said all season that he doesn’t watch the points standings, at least until he’d raced himself into contention for the title. Then he knew he had to pay attention, like it or not.

“I ain’t got no choice but to look at ‘em, right?” he said with a smile after an early-July victory at Talladega Short Track in Eastaboga, Ala.

Thomas took care of business with a flag-to-flag victory in the Nov. 19 event at Needmore, and expressed hopes to do it again in Saturday's 50-lap finale. Asked if he’d sleep well the night before the deciding event, he quickly answered affirmatively.

“Oh yeah, that won’t be a problem,” he said. “For us there isn’t much we can do to make this happen except come out here and win the last race. We’re six points behind, so we’re just gonna make sure we worry about ourselves and our own performance first, and the rest will shake out the way it’s going to shake out. At this point of the season, it’s all any of us in this points deal can do.”