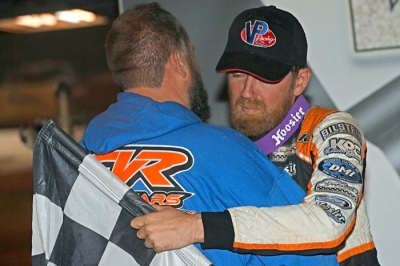 EASTABOGA, Ala. (April 23) — Tears streamed from Matt Henderson’s weary, bloodshot eyes and ran steadily down his cheeks as the Loudon, Tenn., driver steered his car slowly to the scales in the infield after claiming Friday's $2,000 victory in a 40-lap Crate Racin’ USA Series event that opened the 2021 regular season for the Newsome Raceway Parts-sponsored touring division at Talladega Short Track. | RaceWire

This wasn’t going to be a normal winner’s circle celebration, and it certainly wasn’t. When the car reached a stopping point in victory lane, Henderson sat in his CVR Race Cars-fielded machine with his shoulders slumped and his head bowed in silence, collecting his thoughts for several moments. When he did finally raise his head and summoned what remaining mental strength he had after one of the most emotional victories in his career, Henderson started to emerge slowly from the cockpit.

There were more tears, and he exchanged knowing glances with team members who understood the extreme importance of the moment. While this car is powered by a GM Performance 604 Circle Track Engine, and is owned by noted chassis builder Chip Vineyard and serves as CVR’s house car effort, Henderson also drives a No. 00 steelhead engine-outfitted machine on the Topless Outlaws Dirt Racing Series for car owner Luke Crass, who lost his two sons in a tragic incident just three days before the event at the third-mile oval.

Crass and Henderson have developed a close friendship, and the driver was among the first to know about the deaths of the two boys who also served as crew members on his other car, after Crass summoned him to his home and told his driver: “Matt, I’ve just had the worst day of my life.”

“He broke down and just kept saying that over and over, and when he told me his two boys had died I was just totally blown away by that news,” Henderson said. “I couldn’t even begin to know what to say to him. I couldn’t imagine what he was going through, but he wanted me there and I just wanted to be there for him.”

The nightmarish situation deeply affected Henderson’s own thought processes, and haunted him for three days. Henderson is also a father, and knows full well the joys and occasional heartaches associated with raising a child.

“I’m not sure I will ever forget the look on Luke’s face when I got there, and I haven’t been able to get that out of my mind,” Henderson said. “I haven’t slept all week thinking about everything, and all this week after it happened I keep seeing Luke’s face in my mind. I mean … you know that’s a hurt that will never go away for him. Never. You just can’t erase something like that, and it makes me think about my own son Oakley, and how I’d feel if something happened and we lost him. I just can’t grasp the whole deal yet.”

Henderson led every circuit from the pole, his car carrying an Ahlsome Design Concepts-created graphics sticker on the rear body panels that featured a photo of Crass and his two sons, Jared and Javen. After the race, Henderson pointed to the sticker and shook his head in disbelief, still battling to understand the emotions of a very long week as hard as he’d battled to keep eventual runner-up Cody Overton behind him at the high-banked facility.

“It’s unbelievable the way this stuff works out sometimes,” Henderson said. “It’s almost like this victory was supposed to happen, and they were riding with me. All the way down here, I kept thinking, 'Man, if there’s just some way I can win this thing for those guys,' and we had put that sticker on there after Adam Ahl designed and printed it for us. It was like I could almost feel their presence.”

Two cautions slowed the pace, and the second one provided a restart opportunity for both of Henderson’s chief threats. Welshan headed high on the frontstretch, Overton ducked low, and the top three cars were closely tied together as they negotiated turns one and two in a tight battle for the top spot. Henderson emerged still holding the position, and led the final 18 circuits without interruption to secure the emotional win.

“I just knew on that restart those guys were right there on me, because our car didn’t seem to fire off real good,” Henderson said. “Then I kept hearing things during the rest of the race, and I kept waiting for something to break. I just didn’t want to lose a race that I knew was so important to all of us.”

While Henderson said he was able to concentrate on the work ahead once he climbed into the driver’s-side window of his race car, the decision to race under the circumstances was a very difficult one.

“It really didn’t totally hit me until immediately after the race,” Henderson said. “When you’re in a car and you’re racing, you tend to be extremely focused and it’s like everything in the outside world gets shut down. For me personally, that was probably a good thing mentally.

“I was miserable coming down here, because Luke is back home and has lost his two sons who meant the world to him, and he’s facing a horrible reality that is never, ever going to leave his memory. That family’s normal existence will never be the same again. Then here I am out here racing while he’s going through that. It’s terrible, and it didn’t seem right for me to be here, but he called before we left and told me to go win the race for his boys. Somehow, we did that.

"Luke is holding up well and helping to support his wife during these hard times, and I’m sure it’ll take some time for him to get it all sorted out mentally, but he told me that racing is like his safe place, and where he’s most comfortable. He said he feels like he’s got to get back to racing, because that would be the best thing for him.”

“I just knew on that restart those guys were right there on me, because our car didn’t seem to fire off real good. Then I kept hearing things during the rest of the race, and I kept waiting for something to break. I just didn’t want to lose a race that I knew was so important to all of us.”