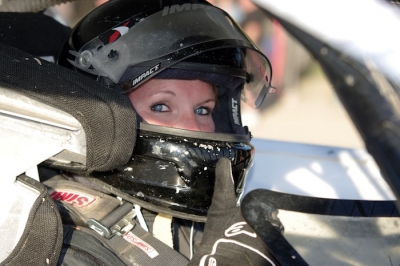 Caley Weese gives a thumbs up at Brighton. (Ken Kelly)

Female drivers are making their mark with the Sweeney Chevrolet RUSH Racing Series with more than a half dozen regularly participating in Crate Late Model and sportsman modified events with the Pulaski, Pa.-based racing organization.

Jennae Piper of Mercersburg, Pa., Megan Mann of Chaptico, Md., and Caley Weese of Carrying Place, Ontario, are among young women who strap on their helmets and battle male counterparts on dirt tracks throughout RUSH's scope at Mid-Atlantic and Canadian ovals.

"Obviously I really love watching these girls go wheel-to-wheel with our guys," RUSH director Vicki Emig said. "However, to be perfectly honest with you, when the race is taking place you simply forget they are girls because they are so competitive. I think that today gender is pretty much a moot point in auto racing and I believe them when they say they never think about being a female when racing.

"Personally I have worked in male-oriented businesses my entire life. Whether running my family's refuse business, promoting Mercer Raceway Park, or now being the series director of RUSH, not once has being a female ever affected the outcome of my goals and I think the women of RUSH have already shown it won't affect theirs."

"She's gained confidence and poise in life situations," Tia Piper said. "She can now handle herself in front of crowds and is able to interact with all types of people. She's not afraid to go up and talk to people. If she needs something for her car, she'll ask another driver."

"Racing has made me put myself out there and talk to people and not just keeping to myself," she said. "It helped me grow as a person by interacting with other people and carrying myself in a positive way. People see how you act at the races, particularly with me being a girl."

She points to a Twitter message she received from a father who said that his 5-year-old son loves watching her race and asks his dad which one is the girl racer. "I would love to meet that kid," Jennae said.

And once she's on the track, she feels accepted like any other racer.

"Whenever we're on the track, we are all individuals and I don't think anybody looks at me as being the girl on the track, at least I hope not," said Jennae, a freshman studying biology at Millersville University in Lancaster, Pa. "I'm younger, but I don't think it's a big topic."

Her fellow drivers don't look at her any differently on the track.

"I don't know her other then to say hi in the pits," said fellow driver, Kris Eaton, who finished second in points at Winchester. "As a driver, we have raced all year at Winchester and she's as good as anyone out there."

"I talk to her a little bit," driver Timmy Booth said. "She does a great job driving the car. Honestly, I can't tell who's driving the card regarding their gender. We all look the same when were inside the car."

Piper has found the same welcome when competing at Path Valley Speedway in Spring Run, Pa., for Roaring Knob Motorsports Complex in Markleysburg, Pa., where in 2014 she grabbed his first feature victory. With help from her parents, Piper hopes to continue her Late Model career, perhaps competing on RUSH's touring tour next season.

Canadian driver Caley Weese, 28, has competed the past six seasons in Crate Late Models, nearly half her 13-year racing career. She first began in four-cylinders before moving up. During five years in pro stocks, she was able to capture a title with the Eastern Ontario Stock Car Challenge Series. In Crate Late Models, she competes at Brighton (Ontario) Speedway against the likes of standout drivers Charlie Sandercock, Corey Earl and Phil Potts.

With nine top-10 finishes in 11 outings, she finished ninth in Brighton points in 2015, but feels like it was her worst Late Model season.

"It's disappointing because we have a great car and something like a flat tire takes us out," she said.

As for racing against the guys, Weese said she has “a pretty close-knit group of friends. I have their support on and off the track. If anything would ever happen to my car, there would be someone from every driver's team who would come over and help us out."

But one thing she's learning in more than a dozen years of racing in multiple divisions: "Nobody wants to get beat by a girl."

Her Brighton competitors are complimentary.

"She's good to race with and is always competitive," said Sandercock, Brighton's champion and winner of the track's $6,000 Great Crate Race. "She's an all-around good person with a good personality on and off the track."

Phil Potts has a different driving style than Weese — "He's just wild on the high side and sideways all the time, but he makes it work. I come from Pro Stock and I love a nice straight car that stays under me." — but knows she's tough competition.

"I'm wide open on the edge hoping for the best and she's what we call a bottom feeder," Potts said. "She's likes to stay at the bottom of the track, but when she's out front you have a hard time catching her. She's fast. She can give it back to you as easy as you can give it to her."

Weese's love for racing began when she attended a race at Brighton as a 13-year-old.

Maryland's Mann, a 16-year-old in her third year of racing, competes in the RUSH Crates and Limited Late Model divisions.

"Most of the year in the Crate I made her start in the rear," said her father, Roland, who co-owns her car along with his father-in-law, Pete Cameron. "Now wherever she draws, she starts. In the beginning of the year she had the typical push. Now she doesn't and I don't think there's any Limited Late Model driver that races against her that has a problem because she's a girl.

"All the Crate guys come over and tell her she's doing a good job. In a heat race one night, she had the pole, led for three laps, and ended up finishing fifth."

A former U-car champion at her home track, Potomac Speedway in Budds Creek, Md., Mann moved into Late Models in 2015, driving the car that former MACS and Three State Flyers champion Jason Covert won nine features for her father in 2015.

Mann's inspiration has come from Super Late Model driver Amanda Whaley. "I watch her when she races at Delaware and Potomac," said Megan. "That inspired me to race." And she attributes much her success to Covert, her mentor.

As for fellow drivers, Mann said she likes “racing against the guys. They come over and support me and give me pointers," said Mann, who enjoys interactions with young fans. "The kids like me to sign stuff for them."

Two other female racers, Lindsay Barton and Lexi Wilson, have recently got their feet wet with the Sweeney RUSH Late Models.

Barton, of Mifflintown Pa., had previously competed in Super Late Models and debuted a Crate car Aug. 14 at Path Valley before competing later in the month at Pittsburgh's Pennsylvania Motor Speedway.

Wilson, of Hamburg, N.Y., was a former asphalt standout at tracks such as Lake Erie Speedway, but this season took over Crate Late Model duties from her father Dave on the dirt at Freedom and Bradford Speedways.