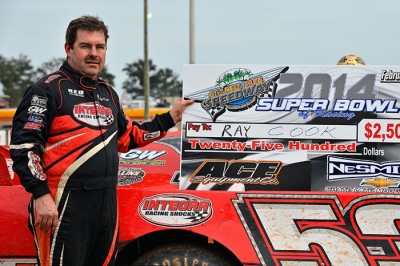 Cook started ninth and moved up to the second spot by lap eight in the Crate Late Model feature. When early race leader Walker Arthur of Forest, Va., began to encounter lapped traffic with 10 laps to go, Cook closed in and made up a half-straightaway deficit. Arthur pushed up the banking in turn one on lap 26, and Cook dove underneath to take the lead.

“I couldn’t catch Arthur until he got into that lapped traffic because until then, it seemed like we were running the same speed,” Cook said. “He tried to lap a car on the outside and the lapped car moved up in front of him. That opened the door for me to take the lead.”

The victory was the second straight on the tour for Cook, who won the 2013 season finale in November at Bubba Raceway Park in Ocala, Fla. That victory came in a different car, but Cook had some valuable pieces from that winning mount.

“We won the race in November with another car, but we took the shocks off that car and put them on my car that I drove today,” Cook said. “We put the same set up under it, and it worked again for us this afternoon.”

Fast qualifier Justin McRee led the first lap, but the fourth-starting Arthur took over on the second lap in a race slowed by seven cautions. The first yellow appeared on lap six when Chase Washington hit the first-turn guardrail.

Arthur led McRee, Steve Cooke, Kicklighter, McCarter, Cook and Mallory Harvey back to green and Cook and Harvey moved upto the third and fourth spots. The caution came out for the second time on lap seven when Kelly Walker cut down the left-rear tire.

The yellow caution bulb got a workout when Cooke spun on the restart, Stacey Roberts spun a lap later, and then McRee spun out of the fourth spot on the ninth lap. The next restart saw Arthur leading Cook, McCarter, Kicklighter and Mark Whitener.

When the field went back to green, Kicklighter got by McCarter for third, but the race was red-flagged on lap 14 when Roberts flipped in turn two, his car coming to rest on its roof. Roberts was OK, but was done for the day. On the restart, Coulter moved up to the fourth spot.

Arthur held a half-straightaway lead over Cook on lap 20, but then the leader began to encounter heavy lapped traffic. The temperature gauge on Arthur’s Cecil B. Arthur Beef Farms Special was pegged and steam began to wisp from underneath the car.

After Arthur had his miscue with the lapped car and Cook took the lead on lap 26, Arthur’s race car gave up the ghost on lap 27 to bring out the final caution. Cook breezed home to take the win in the last five laps of the race as he pulled away from Kicklighter and Coulter.