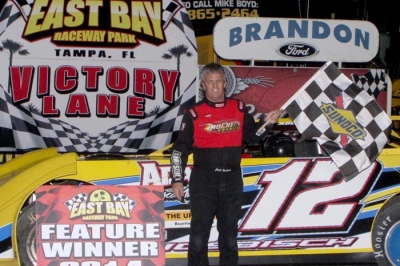 “The car was working flawlessly,”  said the soft-spoken winner, who used the outside groove to gain the lead. “We changed stuff around to run the outside because I figured everyone would be on the bottom and right about lap 16, three of us were battling for the lead.”

Phillip Cobb and Peacock brought the field to the green, but it was Peacock that led through the first three yellow flags and until the halfway mark.

After Nosbisch grabbed the lead, a rash of yellow flags for minor spins on laps 17 and 18 kept the field bunched before Nosbisch started to distance himself from the field.

With five laps remaining, the winner had a five-second lead over Smith and Keith Nosbisch, who faded in the final laps.