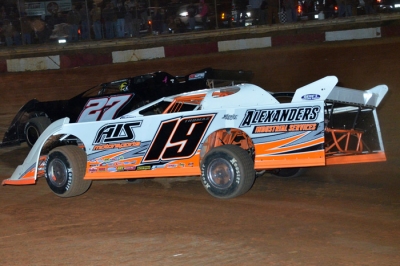 Thomas, who started on the pole in the unsanctioned Crate Late Model special on Thanksgiving weekend, took the checkers in the 50-lap main event ahead of Cook, who battled suspension problems. Chip Brindle of Chatsworth, Ga., took the third spot from Ivedent Lloyd Jr. of Ocala, Fla., late in the race while Michael Brown of Pageland, S.C., rounded out the top five.

Notes: Thomas drives a GRT Race Car sponsored by Alexander’s Industrial Services and Austin Trucking. … Thomas notched his 11th victory of the season and 32nd over the last three seasons. … Cook, who won last year’s $20,000 at Swainsboro, barely missed winning his second Crate Late Model feature in as many weekends; he wraps up his season and now focuses on his new ride in the MasterSbilt Race Cars house car for 2014.